Even When Things Go Dreadfully Wrong

**this post contains a photo some may find disturbing**

I realize today’s title seems inappropriate for THANKFUL THURSDAY. But, read on... 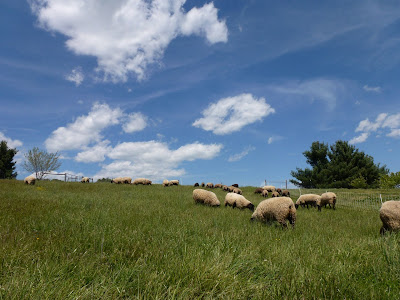 Quite honestly, I really struggle with the whole “in everything give thanks” concept sometimes. My first reaction when things go wrong is not to say a real loud, heartfelt “THANK YOU”…no, it’s generally to say a few choice words, scream, and maybe, just maybe, throw something.  Steady Eddy I am NOT!

However, it is the moments of awful-ness that make us truly appreciate the wonderful moments that otherwise we would take for granted.

It is oh, so very easy to be thankful for my life, the farm, the animals, our work…and so forth when the sky is blue and beautiful and everything on the farm is thriving.

But…that is too often not the case. Gloomy days, sick animals or garden failures have the potential to ruin a day almost before it begins.

Little ewe #135 hadn’t looked real good for a while.  I couldn’t put my finger on it…she just seemed “off”.  Without a real diagnosis, she got no treatment.  I mean she was eating, drinking, and doing all the normal sheep stuff, so maybe I was making a mountain out of a molehill.

When it became obvious that she was in labor, I still had that nagging feeling.  Hours passed and nothing happened.  It was time to do an internal check.  While I love birthing lambs, I really do NOT like this part.  The “internal check” is painful and invasive to the ewe, painful and stressful to me (my arm has to go inside while contractions are taking place and I'm feeling around for the lamb…and means I have my face in the sheep’s rear), and just plain painful to the Boss (who has to hold the frightened, hurting ewe still so I can do what I have to do). He also cannot see what I am doing or how things are progressing and has to listen as I mutter to myself, lost in the throes of obstetrical diagnosis.

The exam indicated that the lamb was quite large and mis-presented, mother’s pelvis was quite small….oh, and the lamb was not moving. When I removed my hand, a whiff of “not-so-nice” hit me in the face.  Not good…not good at all.

It was pretty much a given that the lamb was dead.  If it was not removed, mother would become toxic and die as well.

Despite my best efforts, I could not re-position the lamb and get labor to proceed. There was just no way I was getting this lamb out. The lamb was so large and the mother’s pelvis so small. There was no way around it…this would be a total loss.  The lamb(s) was already lost, and the ewe would follow suit shortly. We made the decision to put her out of her misery.

While that kind of decision really makes me sad, bothers me, frustrates me (and the Boss as well), that’s just the way it goes sometimes.  I will admit, we were both more than a little bummed when we went to bed at the end of that day.  Kinda makes ya wonder why you even bother. 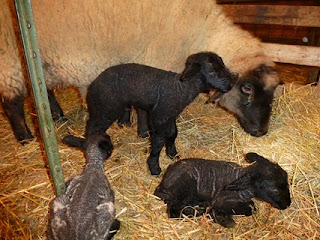 But, morning brought a new miracle.  Life was beginning all over the barn as we arrived.  Twin ram lambs were born without any sort of human aid.  As we cared for the twins, triplet ewe lambs were arriving on the other side of the barn, again without human aid.

I really don’t think we would appreciate the mountaintop experiences if it wasn’t for the time we spend in the valley of despair and discouragement sometimes.  The bad times grant some texture to our lives. 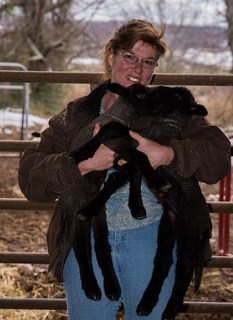 So, while my first thought is not to say…

Gee, I’m thankful that this went so terribly wrong…

I suppose it should be.

Because the not-so good, bad, awful experiences made me (us) much more appreciative of the good, great, amazing days, weeks and years of this special life we are blessed with living.

...and for that I am thankful!