How I Became a Sheep Mother 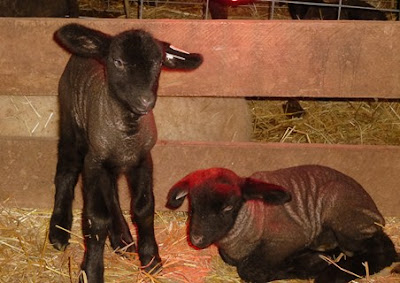 Few things bother me more than when any mother mistreats, neglects or abuses her offspring. That kind of behavior is truly reprehensible.

Something should be done about bad mothers.

While my “issues” with the subject stem from human relations, on occasion we have to deal with the concerns caused by bad mothers here on the hill.

When raising livestock, many qualities are considered when keeping back breeding animals. You look for vigorous, productive animals that will breed easily and produce young that will grow out well.  Female animals should have a good “mothering on” instinct in order to guarantee the health of the next generation.

“Mothering on” begins with a relatively easy birth process, followed by the instinctive response to care for the young.  The mother should immediately begin to bond with the young, cleaning it and getting it to eat for the first time. As the baby (in this case, a lamb) grows, the mother should provide some sort of protection for it…leading it to safe eating and sleeping areas, and on occasion defending it from larger animals.

Despite our best efforts…sometimes this goes all wrong.

When we held back the ewe lambs from the 2011 crop, I was so excited. You can read this. They looked great.  When we bred them, they all appeared to “take”...so we waited.

When #145 showed signs of labor, we thought everything would be fine. Her mother is one of our oldest, most productive, most successful ewes.   One of the other young ewes had lambed successfully. After all, this is a natural process…

…and then nothing happened.  Labor stopped.

We examined, we manipulated, and we hoped and prayed…we left her alone.  Nothing.

With every passing hour, it became more urgent to get the babies inside out into the world. As the amniotic fluid drained, so did their survival chances.   If they died, she would surely die…and we were already facing that issue with another sheep.

We learned about the need for urgency in this type of situation the hard way a long time ago.  Nothing like a trip to the vet in the middle of the cold and snowy winter for a sheep cesarean that yields two dead lambs, a dying ewe and a bill for $275.00. I hate to think what it would cost today. We aren’t doing that one again!

As I did another internal examination, it became obvious that we were going to have to work incredibly hard to birth out these lambs, if we could get them out at all.  There were absolutely no useful contractions, and the entire environment was far drier than is usually the case. Time was of the essence.

But, through sheer determination on my part and a lot of muscle from the Boss…we got those babies out of there.  YES!  Healthy twins!  A boy and a girl…good sized babies!

Thinking perhaps she was in pain (she had just been through a lot) I gave her some medication. That seemed to help and she began the cleaning, talking process that sheep do.  It seemed a little “half-hearted” but I was still feeling hopeful.

Things seemed to settle out some.  But, the lambs were doing an inordinate amount of crying.  Lambs bleat or cry, not unlike human babies when they are in need.  Generally, they just need a bit of nourishment. Find mom, get a little sip, and all’s right in the world.  #145 had milk, so that wasn’t the problem.

When the family came out to mingle with the rest of the flock, it became evident that the lambs weren’t getting enough, if anything at all, to eat from their mother.  They tried to snitch a little snack from all the other moms.  But, success was rare, and they were getting kicked and butted a lot. The crying continued.

By this time, #145 was only allowing the ewe lamb to eat.  She would butt the little ram lamb every time he got close, or kick him over when he snuck in from behind. We aren’t talking gentle butts and kicks, either. 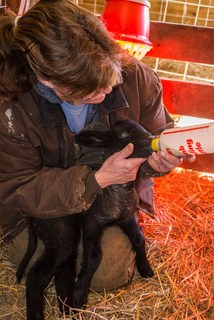 I decided to take matters into my own hands and got him out of harm’s way, putting him in his own little pen.

One ewe had lost one of her lambs and had a huge amount of milk. Most of the time she's quite cooperative, and she really needed to be relieved of all the milk. She let this little guy nurse a couple of times, and I hoped I could graft him onto her.  But, ultimately, she wouldn’t accept him as her own.  This one was gonna be a bottle baby whether we liked it or not. The Boss headed out to the farm supply store for a bag of milk replacer.

By this time, #145 had given up caring for the ewe lamb as well.  She was running away from her, butting her and screaming all the time.  It was baffling.  She had milk…she had mothered on…and now, after 2 days, she wanted nothing to do with the lambs.To say I was getting annoyed was a bit of an understatement. 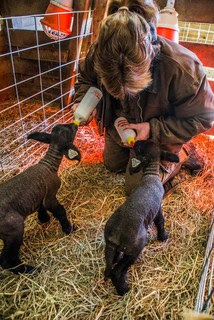 After “borrowing” a little more milk from the one-lamb ewe, I penned the siblings together and began the task of teaching them to be bottle babies.  This process can be lengthy as lambs are not known for their great mental prowess. Incredibly, it didn’t take long and now they know my voice and come running when they hear me….looking for their next meal.

“Mother sheep-145” has never once looked for them.  Generally, a ewe will call her babies constantly for the first week, making sure they are accounted for at all times.  Not this one.  Nothing.

That’s what I call a bad mother.


Soon, we will be taking several old sheep to the stockyard. There are a couple of ewes that turned up “open” (not bred) after all. This kind of animal is referred to as a "hayburner". No point in feeding them all winter.


You better know that #145 will be first on the truck, heading out to the yard.  We might as well get something out of her.  It might even pay for that bag of milk replacer. Now, that's doing something about a bad mother! 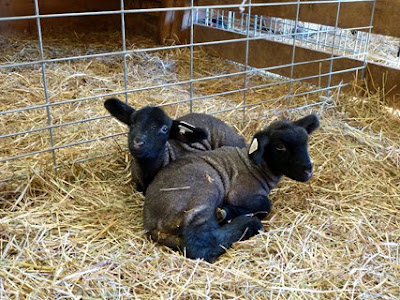 There you have it.  I am now the surrogate mother to two lambs. They seem to be thriving.  There are some who would question my sanity and reason, going to the added effort and expense of raising these two.  Maybe we shouldn’t have tried so valiantly to birth the lambs. Maybe we should have let nature take its course.  Maybe we should have left well enough alone.  But, we didn’t…and now it’s our responsibility to care for those little lives we helped bring into the world, all the while remembering the place and purpose of animals on the farm.

Let's hope I make a good sheep-mom...these little guys are depending on me!