Lambing season is a bit like Christmas…you know there is something there…but, you’re not quite sure what…or how many.  Twins are generally the rule, but sometimes there are more…sometimes fewer.  A shepherd-friend even had a ewe give birth to quadruplets! So, you just have to wait and see.

Since we used a ram marker this past breeding season, I had a pretty good idea when the babies would start arriving. My calculations were right on, too, I might add.  Once the first lambs arrived, there was a short lull in the activity and then there were lambs popping everywhere.

As the time grew close, a couple of the ewes started to have some “issues”.  Every time they would lie down, they would prolapse.  …and yes, that means exactly what you think.  Some of what should only be INSIDE would pop OUTSIDE.  It’s okay to say, “EWWW, Gross!”   I know I did, repeatedly. ugh

One of the sheep with this problem was a former show lamb named Trisha.  She’s a big, wide girl with hams worthy of a show hog.  As she packed on the late pregnancy pounds, she looked more and more like a pig in very dirty fleece pajamas. Honestly, it was not a pretty sight. She was eating continually.  In the past, during multiple pregnancies, she had always singled.  So, I wasn’t expecting much from her this year. A single lamb is completely acceptable.  Particularly if the ewe requires no assistance and the lamb grows out well.

Imagine my surprise as we walked in the barn to see her giving birth to the second of twins.  No, wait….

“HEY!” the Boss exclaimed. “I think she’s having triplets!” Before I could respond, Baby #3 had been born. 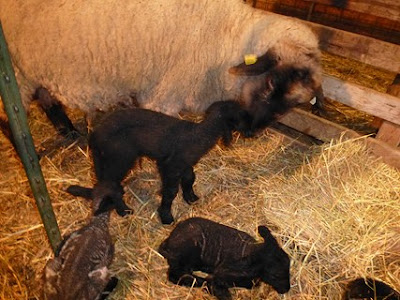 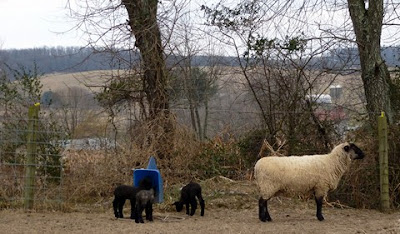 Usually triplets mean that at least one of the babies will need some sort of supplementation.  Not so in this case.  Trisha has proven to be an exemplary mother, keeping her young daughters close and feeding them well.  One of them is quite nice and worth keeping an eye on as a future breeder. Since they are all little ewe lambs (girl sheep) I have been referring to them as “the Supremes”. No, we really don’t give all the lambs names…

During this entire time, one of my favorite sheep, Tillie, had been having all sorts of “issues”. As the daughter of one of the first Suffolks that we raised here on the hill, she is sort of special.  She’s a very nice animal, rather affectionate and a good producer.  She even has a pleasant yet distinctive voice, unlike some of the others that just yell raucously without end when they perceive they need something.

But, her prolapses were disturbing, almost horrifying.  She was huge…and seemed to get bigger every time we went to the barn.  She was constantly eating and eating and eating.  When she would lie down, her stomach would protrude weirdly, the prolapse would grow larger and larger and she would begin to writhe and scream.  It was unsettling to say the least. However, when she would stand up, everything would go back where it belonged…most of the time. This went on for the better part of a week.

Finally, I couldn’t take it anymore.  We corralled her and pushed the prolapsing tissue back where it belonged.  I couldn’t feel anything amiss, but worried that something horrible was going on inside her.  The Boss advised a “wait and see” attitude.

Finally, she began to labor. We went into delivery mode.

We thought we would give her some time to have the second one.

Then he popped out, rather gushed out, bringing all the watery birth sacs with him. Yuck, I was drenched.

Wait a minute… some more hooves are presenting… oh my!

Ooop…a little re-positioning is necessary this time… and baby #3 is born! 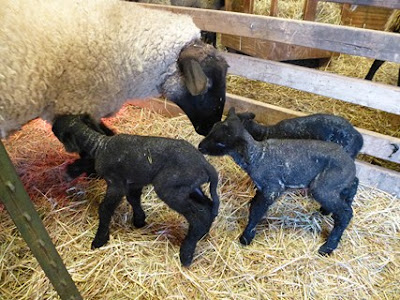 All in all, nearly 30 pounds of lambs!  WOW! Well, now…that explains all the pre-delivery issues.

Despite the stress of late pregnancy and the assistance needed in delivery, Tillie is raising her lambs without human assistance. They are thriving as well. All pre-delivery issues have been resolved.


Prior to the birth, I had the odd thought that if Tillie had triplet ram lambs (guy sheep, as one of my nephews called them long ago), we could name them Manny,  Moe and Jack.  You know…the Pep Boys? (auto parts stores)    Unbeknownst to me, the Boss had the exact same thought.


However, one is a ewe lamb.  I guess that makes them the Pep “Boyz”…Manny, Moe and Jacqueline. 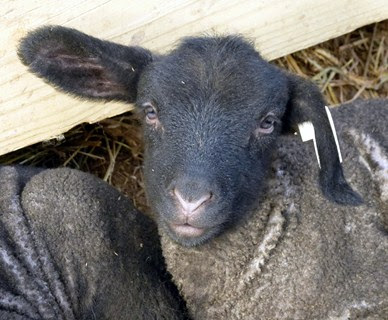 Surprise!
Posted by Barbara at 5:52 AM