"you've got to see the baaaaaaby"

I suppose I should apologize to Jerry Seinfield for using one of his show lines for today's title, but it is just too perfect for this story. Right now, when anyone visits...we say "you've got to see the baaaaaaaby!" A silly comment that always makes our grown children laugh (and roll their eyes)

Lambing season of 2011 is nearly behind us. There is always something new to get through, something new to learn. Fact is, with all this "learning", I still feel pretty stupid and helpless a lot of the time.

This year's season happened to coincide with some of the coldest weather in recent history. Nope, take that back....coldest weather in about 25 years! But, that's the topic for another entry. Since the newborns can't take the cold, I was checking for babies about every two hours. (Yes, even in the night!)

We lost a couple lambs, and I hate that. But, generally, once they're on the ground, we don't have a lot of problems. The ewes are good mothers and our set-up is well-planned. So, I was being overly diligent in the checking.

On one of my midnight runs, I noticed some odd movements in one of the jug pens. A word of explanation, a "jug" is a small pen where the mother and newborns are put for some bonding time. Sheep are VERY stupid and a lot of times will "misplace" their babies and the babies aren't strong enough to look for their mother and her life-giving milk. We generally leave them in these small pens for 2 days. The ewe gets special treatment (alfalfa hay and grain, along with fresh water...sometimes we even give her molasses) This gives us a chance to check the babies for any health issues as well.

The "odd movements" required some attention. Oh NO (alright, that is NOT what I said) the "odd movements" were one baby had been stepped on (I guess, that's the only logical explanation) and his leg was broken. Oh, his leg was REALLY broken. It was swinging around as he tried desperately to maintain his balance and get something to eat from his mom. His mother must have thought he was some type of creepy alien, because she was freaking out, trying to get away from him. Okay, it's one thirty in the morning, I have a newborn lamb with a broken "femur"...what do I do? I probably should have put him down, but he was so determined, so feisty. I racked my sleep-deprived brain for splint ideas, and headed back to the house. The only thing I could find (that I could cut with my Leatherman) were some wooden skewers I had in the kitchen for a cooking experiment. I grabbed those and headed out to the vet cabinet. I knew I had some tape....why can't I be more organized? Okay, got the splints, got the tape, found some scissors...back to the barn.

I got the leg set relatively well. You try setting something the size of a chicken bone, in the cold, in the dark, in the middle of the night with a very unhappy ewe looking over your shoulder. Definitely NOT one of my better moments. I put the lamb back in the pen. "Mother" took one look and BLAM....It was bad enough when his leg was swinging in the breeze, now he really looked like an alien! And, he smelled weird, too! BLAM! She knocked him over again. When I reached in the break things up...BLAM she got me too. Oh, this was going extremely well.

At that point, I realized that he would never make it through the night in the pen. I really didn't know if he would anyway. So, I made sure all the others were fine, tucked him in my coat and headed to the house. I figured at least we could be warm while I figured out what to do.

Surely, he must be in pain. Surely, he was hungry. He kept nibbling on my face as I headed to the house. I fixed him a bottle, and dang if he didn't eat it! Usually lambs have to be "taught" to use a bottle. I didn't know exactly what should be done about the pain his leg must be causing him. Our vet supplies include a good pain medicine, but the dose is 1cc for 100 lbs. This guy was about 8 pounds, tops...how do I get a tiny drop in the syringe? I finally decided on an amount, administered it, and put him on a towel in front the woodstove. At the time, he wasn't moving around too much. I figured my "helping" had probably killed him, soI laid down on the couch, hoping to fall back to sleep. I would have to explain my midnight foray to Tom in the morning. I figured the lamb would just be another "casualty", but I knew I had done all I could.

Prior to my next barn check, an insistent, small voice going "BAAAAAA!" woke me. He was standing up, looking around for something to eat! I gave him something to eat and laid him back down. When I came back from my barn check, there he was...he had flopped himself across the livingroom, and was moving toward me, again looking for food! I gave him a little more and found a box to contain him. Back to sleep for a bit.

When Tom got up for the day, a lamb voice from the livingroom greeted him. A quick telling of the tale answered his somewhat sleepy "HUH?" His first response was that I should have put the lamb down, he must be in pain, he'd never be right, and that I really didn't need this....that I would get too "attached". Oh, ooops....he must have looked at my face. THAT had already happened! Don't get me wrong, I wasn't looking for a pet. I just wanted to beat death...just once. These animals represent our living, I seriously hate to lose one. Okay, he said....I'll set up the hospital pen, we'll get milk replacer in town later.

In the light of day, the crudity of my first aid became apparent. We found a paint paddle, cut it to length and re-set the leg using vet wrap. The little bone was almost crushed. I could feel splinters of bone under the skin. There was a moment when I nearly gagged, and couldn't go on. This injury was similar...all too familiar...back in April our eldest daughter was nearly killed by a reckless driver. One of her many injuries was a shattered femur. It had not occurred to me that was what that looked like prior to surgery. The flood of memories overwhelmed momentarily. But, she's a survivor...and apparently, so was this lamb. That thought gave me a little more motivation to succeed.

That was almost three weeks ago. He is growing quite well. I see no signs of infection. We changed the bandage yesterday, and I could feel the healing bone underneath the skin. Yehaw! My "james herriot" moment paid off. Looks like he'll make it. Betsy suggested we call him "Jimmy Dean", because despite any "attachment" he remains a farm animal with one purpose in life...to become food. But, it is a life well lived.

If you happen by, you will get the tour of Jimmy Dean in his little hospital pen. His insistent little voice seems to say, "you've got to FEED the baaaaaaaaby!" 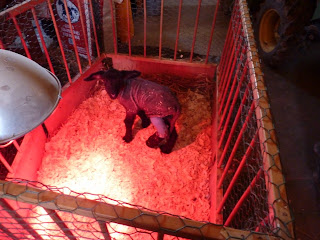