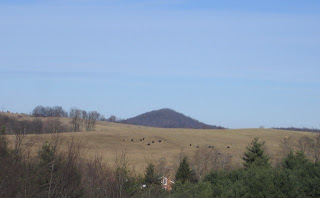 It occurred to me today that “views, views, views” must be code for WIND, WIND, WIND. As I sit here, I can hear the greenhouse plastic flapping against the back of the house, the vent creaking with the blustering breeze.

Perched here high on our hill, the wind swirls almost constantly. It is at its worst in the winter, bringing with it biting cold and the occasional snow flurry. The summer winds feel like a blast from a furnace, threatening to bake everything in the garden. When the weather forecast calls for breezy conditions, we better batten down the hatches!

Living with the wind, you learn to be more observant. The gates must be latched, or they blow open. Yes, there HAVE been cows in the backyard before! The trashcan lids must be placed tightly on the cans, or who knows where they might end up. Doors on the hoophouses….CLOSED…or else…

More than 10 years ago, on a VERY windy (even by our standards) day, I happened to look out the upstairs window and see the side of the hoophouse waving at me. I looked again, unable to believe what I was seeing. Sure enough, one whole side was actually blowing up and down with the wind. It looked like a giant flag. I know I screamed. (yes, I do a LOT of screaming)

We assembled the troops, gathered some tools and headed out for a “quick” repair job. Tom’s “half-hour” repair jobs are a running joke around here. His “half hours” are measured in NFL time, I’m sure. (you know, where 2 minutes can last nearly FOREVER)

At the time, we had some young chickens housed in the hoophouse. As I recall, we were raising them for someone else and that caused endless worry. Betsy and Amanda were quite young, and Amanda was very tiny. The two girls went scurrying out into the windy day.

Amanda’s first thought was to rescue those chickens. She could run like the wind itself at the time, so she got to the hoophouse first. When the rest of us arrived, she had both arms full of chickens. I’ll get the chickens, she assured. Not a clue what she was going to do with them, but she had caught them never the less. Tom had her put the chickens down and told her we would focus on the repair job.

Everyone pitched in to hold down the side. As Tom worked putting the screws back in the boards and the boards back on the sides, we realized that Amanda was beginning to be blown off the ground. With every big puff of wind, up in the air she would go. We exchanged startled glances. Nope, can’t have the girls help….they might blow away. Safety is always number one with Tom. With much complaining, they headed back to the house. I’m fairly certain they thought they were missing all the “fun”.

We finally got the side re-attached, and headed back inside ourselves…vowing to CLOSE the doors whenever the wind came up in the future.

Years ago, a friend said “you learned a lot on that one, Tom” referring to a project gone awry. Over the years, we’ve “LEARNED A LOT” on a great number of things. So, you guessed it…..today those doors are CLOSED! 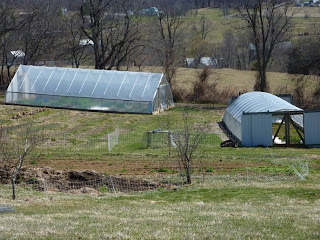 (this photo was taken on a CALM day)
Posted by Barbara at 8:15 PM