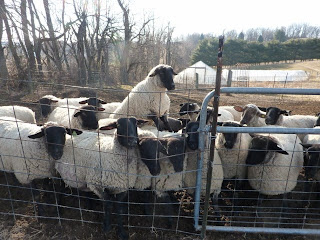 The other day, Tom was reading me an article about a new “thrill” for teenagers…car surfing. Sounded like another stupid way to get really hurt to me. Then I got to thinking…well, I’ve been sheep surfing before…

Okay, this one needs some serious explanation.

When it’s muddy, and the sheep are hungry, they become a force to be reckoned with. Imagine if you will… twenty, hungry, 200lb (that’s each) balls of Velcro…that can gallop. It doesn’t matter to them that they were given feed a mere 7 hours ago, to their minds they are STARVING!

I used to go out among them with the bucket, attempting to get the feed into the feeder between the bobbing heads of the near omnivorous beings. I hesitated to stand too still for fear of being knocked over, trampled and eaten alive. When it was muddy or icy, this became an amazingly dangerous activity. On more than one occasion, I found myself caught between the "Velcro balls", my feet no longer touching the ground, being swept along as the sheep jockeyed for position at the feeder. It was an eerie feeling. It felt like skateboarding with no board…and absolutely NO control. But, the worst part was actually the amount of feed that ended up on the ground, wasted.

This year, we decided to do something new. The feeders are in a separate area. A gate at each end allows access. I go in, behind the closed gate, and pour out the feed in relative peace. The ewes have to wait (albeit impatiently) until I am ready for them to come in. This system seemed the solution I had been dreaming of. No more wasted feed! YES!

All went well until a slippery day. When I pushed open the gate, I lost my footing. The ewes ran in, sweeping me off my feet entirely. Thankfully, I was still holding the gate, so I didn’t go down in the mud. For several seconds, I “rode the wave”…yep, right up on the backs of all those sheep going to the feeder. Hey, I know how Garth Brooks felt when they used to pass him through the audience. Yeah, that was kinda cool! (sorta...momentarily) It also made my shoulder hurt like….well, it really hurt! Matter of fact, a month or so later and it STILL hurts! But, who else can say they have been sheep surfing?

The number of unintentional “adventures” I’ve had around here are multitude. Guess I’ll have to look back into the dim and dusty past to come up with a few examples of “fun” you can’t have anywhere but a farm! Maybe I should get Tom to tell his tales of “mutton bustin”….
Posted by Barbara at 7:08 AM