a man outstanding in his field 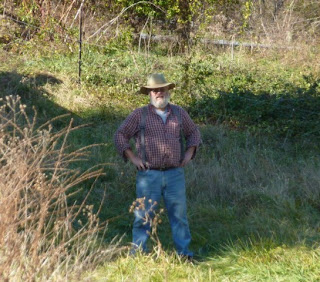 In an effort to get to know us better, this one is dedicated to Tom.

Years ago, in our "other life", I found myself talking to Tom's boss. Tom was a career substation electrician for "the" power company. His boss said that if electricians could walk on water....Tom would be the one. To his mind Tom was the best there was!

When we left our "other life" behind, Tom applied that same talent level to the homestead. There's probably nothing he can't build or fix. Every building around here is a direct result of his handiwork. He's also in charge of the constant upkeep and repair. ...and he's the best there is!

Tom is the steady one. The one who does NOT fly off the handle, cry or scream. (yeah, that would be ME) His stability is what keeps things sorta sane around here. His support is what makes a LOT of this possible.

For ten years, he encouraged me in my milk-cow endeavors. That meant mid-night calls to the vet, tons and tons of feed, trips here and there looking at cows, and LOTS of worry and money. He even bought me a cow once! The only reason he ever suggested getting rid of them was he didn't like how very upset the bad times made ME. When we finally got rid of the cows, he didn't exult that he had been right all along, he missed them along with me.

We've finally gotten to the point where this feels more like a partnership. He encourages me to try some of the endless ideas that I have for new ventures. Some succeed...some fail, but his support doesn't waver.

He likes to say he's the braun of the operation, to my brains. To that I say....Lord help us! But, it makes for a pretty good team.

So, here's to Tom!
It wouldn't be possible without you, Boss. 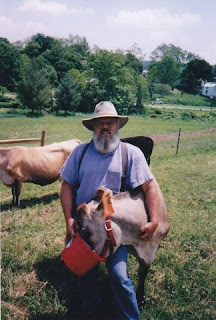