Our farm is located right outside the tiny town of Middlebrook, VA. Once a thriving community that boasted no fewer than 9 grocery stores, it is simply a "poke and plum town" now. (that's ….poke your head out the window and you're plum out of town!) The railroad took a different path, the main traffic route didn't go anywhere near town, and the "metropolis" of Middlebrook became a distant memory. 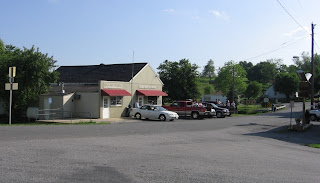 Imagine "Mayberry" with a rural flavor. It used to be that the post office and the hardware store were side by side. When they would leave the door between open, you'd end up greeting half of the town if you went to get a package. When we first moved here, there was a discussion between the post mistress present and the postmaster past as to what number we should be. Since we were the first new house in fifteen years, we caused quite a stir. The conversation went something like, “you think 131….no, I think it should be 132….yeah, because the next house is….” Then we were asked if that was okay with us. I had no idea this was how you got an address! (unfortunately the 9-1-1 system changed all that)

If you happen to be driving a pick-up, you can count on at least a few waves as you cruise down Middlebrook Road. Nowadays, the waves are fewer, as the number of “new folks” has increased. I recognize vehicles long before I can see the driver! Occasionally, it becomes apparent that all the "old-timers" know you, know what you're doing, and more than likely have an opinion on it. That realization is a little unsettling at first, but oddly comforting over time. The crops we had one summer in the hoophouse were apparently the topic of many post office/hardware store discussions. But,these ARE folks who care. We have experienced their warm concern firsthand. These people are the BEST!

Not much is left in Middlebrook anymore. We have a post office, a doctor's office, a garage, and a library "station" (the library is open very limited hours), the Russian Orthodox Church, the Volunteer Fire Department and the ball field. That's it!

On summer Wednesday and Thursday nights, there are softball games. These can get quite "interesting". We can see the lights and hear the voices. But, come 10 o’clock, everybody is heading home.

There are chickens, cows, goats and pigs within the town limits. Some of these critters have added to the "character" of M'brook on more than one occasion. Oh, there was also a black bear at the ball field once. That story made the rounds for weeks.

The first time I remember going through Middlebrook, I thought…now, this is nice. The large, rolling farms with the Appalachians as a backdrop give us some beautiful views. When we found our little piece of farm land, I thought….now, this is nice…this is HOME!

Despite the fact that we are not natives, our roots here run deep. Our eldest daughter had her wedding and reception at the fire hall/community center. 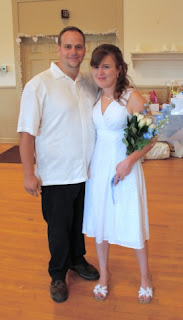 It was a great place for a wedding. Later, when she and her husband were in a horrible accident, the town residents were the first to respond with cards and contributions. We all felt the love of good neighbors.

Our youngest daughter has ridden a tractor in the annual fireman’s parade. It was the fulfillment of a lifetime dream, riding alongside “her man”. 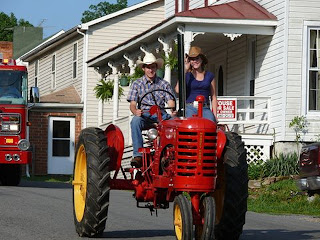 When they won a prize, it was hand delivered by a member of the fire department. They weren’t sure about the fella, but they all knew who that girl was!


It’s a quiet little place in one of the most beautiful locations on earth. It can feel like you’re a million miles from anywhere, particularly on a cold, clear night. The night sky is simply amazing. On the other hand, it’s only a few minutes from the interstate. So close, that when weather conditions are right, you can hear the big rigs running down the road. We’re not TOO far from town, but not too CLOSE, either.

And to borrow a line from Kenny Chesney,