In Hopes of Preventing Scurvy 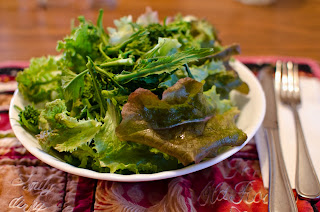 Ever notice how green stuff sells in the winter? Think about it, there’s some need deep inside us for the greens of summer. Houseplants sell better in the winter. Perhaps it’s the hopes of bringing on that early spring that Puxatawney Phil predicts.

But, how about salads and the dark leafy greens…ever found yourself daydreaming about a salad when there is snow on the ground? I don’t know if there is some innate desire for the taste of greens, or somehow our bodies realize that without those vitamins, we really are in danger of developing scurvy.

Back in our “other life” (most of our current ventures have their roots there); I read an article called “Salads in the Snow”. I still have the article somewhere (sorry, Betsy…you know how hard it is for me to throw things away!) I don’t really remember the article. It was the pictures that grabbed my attention. Written by Barbara Damarosh, and containing pictures of her husband, Elliot Coleman, it showed their hoophouses, and crops actually growing…despite the surrounding snow cover. Oh, the best part of their success…they live and farm in MAINE! Mmmmm, fresh food in the winter…mmm, I could definitely get into that! Those little wheels in my head began turning.

Life was in a different place at the time. I stapled the article together, put it away, and thought about those greens with a little envy from time to time. As fate, destiny, God’s perfect plan, call it what you will, would have it, we moved to the Valley, began a new life, and I found the article again.

When we first moved here, we began to eat more seasonally. If we hadn’t put it up over the summer, we didn’t have it in the winter. (for the most part) We no longer bought fresh produce in the winter that was trucked in from half a world away. This wasn’t always because we were so convicted about the source of our food, or keeping the environment green, we were just broke!

Winter has to be the hardest time of the year. It’s dark and cold, and there’s nothing to do. (Oh, yes there is….but, that’s another story) The recurring canned green beans and our diet’s dependence on root crops and other long keeping food did nothing to remedy that. That craving for fresh greens threatened to overwhelm. Maybe we could eat grass….weeds…? One year, Tom made a desperate trip to Whole Foods in search of salad greens and a tomato! It didn’t live up to his expectations, at all! But, it did start those little wheels again.

For a number of winters, the hoophouse provided winter shelter for several hundred laying hens. When spring came, we would put the chickens out on pasture and plant broccoli in the hoophouse. By the time the broccoli crop was harvested, it was getting hot…too hot to fully utilize the hoophouse for growing crops. Or so we thought. We tried corn, tomatoes, melons, cucumbers. All grew with limited success, although they did make for some great neighborhood discussions!

We were growing some stuff in coldframes at the time, again with limited success. Tom built the coldframes out of some oak boards from the lumber yard. No way were those things going anywhere! The tops were another story. As mentioned before, the wind here is a force to be reckoned with. Countless designs, numerous rebuilds, but we were never quite happy with the end result. To get real crop growth, we needed to address air circulation. The coldframes eliminated Tom’s need for greens that threatened to overwhelm him every year. He no longer envied the cows those first green tendrils in the early spring. But, the design wasn’t the most efficient way to get the winter greens we felt we needed.

An aside here, the coldframes protected the crops in the winter time….once the neighbor’s horses escaped in the middle of the night, came over and started chomping around. The coldframe had a big horse noseprint in it, but the lettuce inside escaped unscathed!

As time went on, it became evident that the hoophouses would be far more profitable if used for growing greens year round, if we could only figure out how…. Hey, wait…didn’t I read an article somewhere…?

Now there are two hoophouses that should be full of growing green stuff year round. I admit, the plans and dreams often surpass reality. We haven’t realized the full potential of the hoophouses yet. Maybe next year… 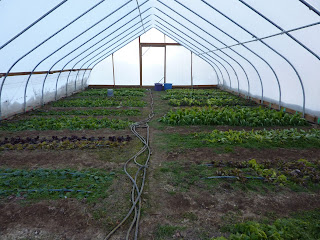 So, far…no scurvy this year…and our customers are happily consuming all the arugula and spinach we can grow.
Posted by Barbara at 4:44 PM