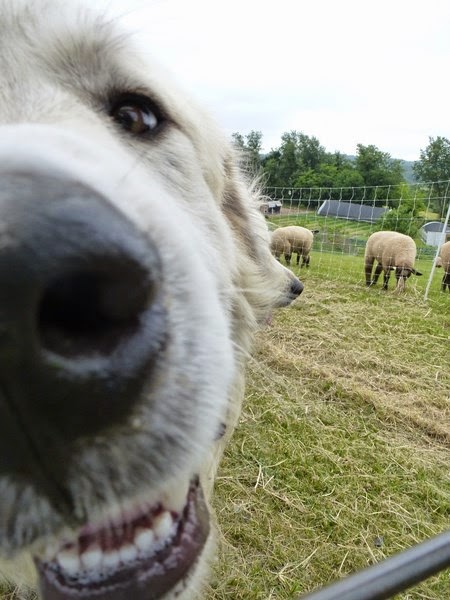 Mama has been telling me all week how I should be thankful…thankful I’m alive, thankful I’m cute, and really thankful she hasn’t killed me.  So, with that in mind, I had her write this post on my behalf.

For those of you who don’t know me, allow me to introduce myself.  I am Gus, the Great Pyrenees puppy who joined the farm team last September after the passing of Jed (the first Great Pyrenees).  I was born last July, I weigh in at about 100 pounds and I am still learning the whole guard dog routine.  Ellie Mae is my longsuffering teacher-dog and mentor. We make a pretty good team. 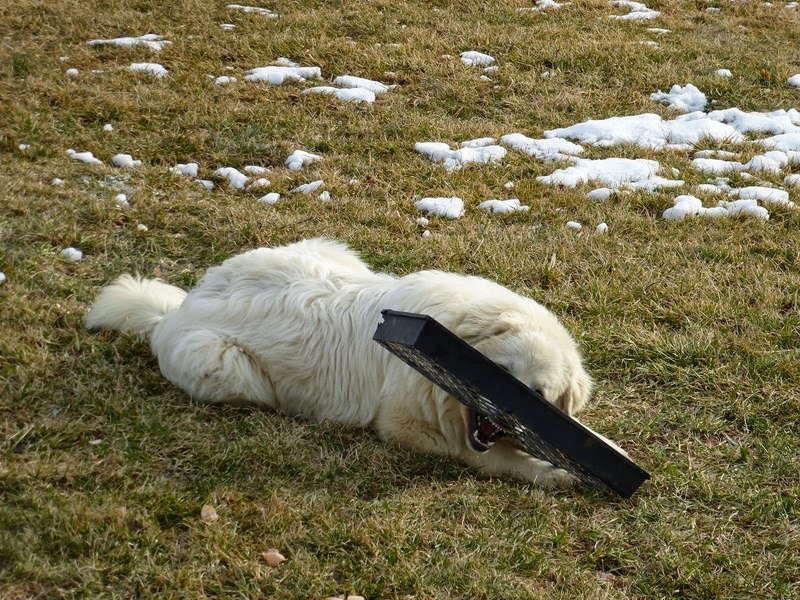 This whole deal about being thankful started some time ago.  You know, it’s really hard for a dog to know what NOT to eat around here.  I mean, the sheep make these tasty little raisin things, but Mama hollers when I eat them and then try to kiss her.  The chicken pen could really use a good cleaning, but when Ellie and I start digging around and eating that stuff, the Boss always shoos us out.

And, I really don’t know what her hang-up is about those plastic tray things.  I mean, she has a bazillion of them, does it really matter if I chew one up once in a while?  He fusses a lot whenever I take the nearly empty cat food cans out of the barn for some extra cleaning. And, when I haul big sticks out of the burn pile, or out of the woodpile, someone is sure to yell at me.  I thought they'd forgotten the dryer vent incident 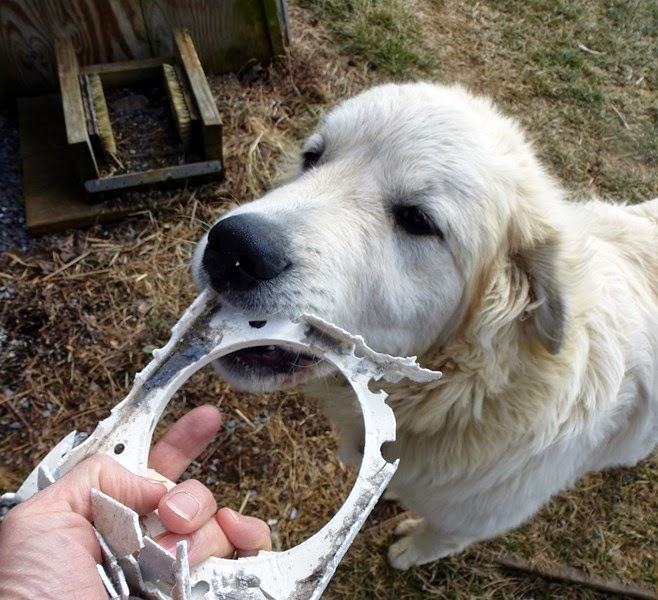 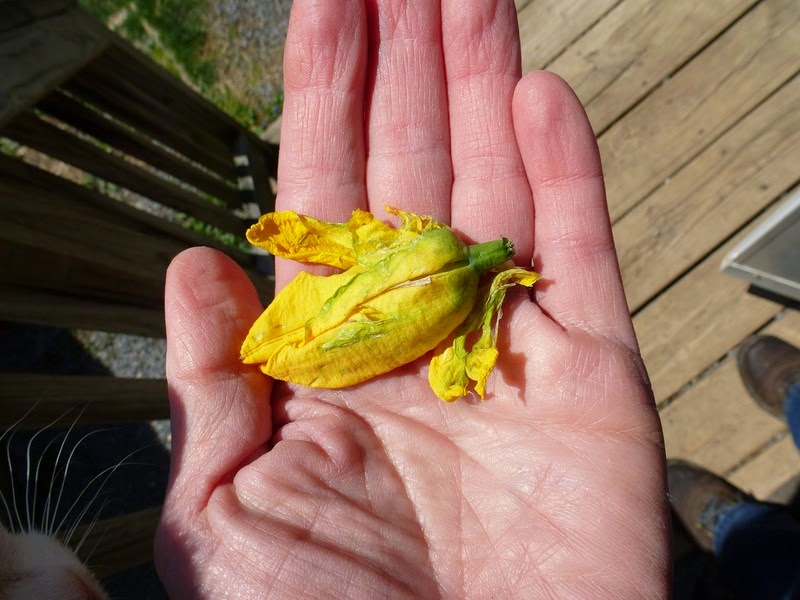 And I thought I looked rather attractive with a lilac branch in my mouth!

Anyway, there was this little black plastic thingy hanging from the trailer.  It kept blowing in the breeze and just looked like it might be rather tasty.  You know chewing on black plastic has been shown to help dogs avoid tartar build-up on their teeth…really…I’m sure.  So, I bit it.  Then, I pulled on it.  Before I knew it, the little black plastic thingy was in a million pieces.  I had one in my mouth when Mama came outside for the day.  I showed it to her, I thought she would appreciate my interest in dental hygiene.  She started fussing.  I led her to the trailer…she fussed some more.  She got the Boss and HE fussed.  Who knew that the little black plastic thingy (that tasted SO good) was the wire to the market trailer lights?  …and it would have to be repaired before Market?  Oops  (and I forgot that I had already jumped all over the side of the truck with dirty feet while trying to capture a cat)  Double Oops!

Then, a couple of weeks ago, they were getting ready for Market when I showed them the ‘possum Ellie and I had captured in the night.  It wasn’t quite dead, but we had really done a number on it. They took a look at it, but weren’t too impressed.  After the Boss left, Mama finished off the ‘possum for us and then she kinda freaked out a little.  She’s no sissie, so it wasn’t the ‘possum.  No, she started worrying me about the two bottles of bleach I’d taken out to the orchard.  Now, I don’t really know why I took them out there…I guess I could have used them to clean up the ‘possum mess, but I couldn’t get the labels off very well.  I bit the handles, but nothing happened, so I got bored with them.  She kept smelling my breath and my fur and talking to herself about dogs drinking bleach.  I could have told her not to worry about it—I would never drink bleach, I just wanted to know if white plastic tasted the same as black, but she never really asked, so I kept that to myself. I guess that did cause a little unnecessary worry for her.  Ooops

This week, she got really mad.  I mean….really, really mad.  She went all "Alpha-wolf" and screamed and hollered…she even threw a few things.  If you heard some sonic boom the other morning, yeah, that was Mama yelling at me for destroying her Brussels sprouts plants.  Ooops

I really don’t know WHY she gets all worked up like this.  She’s got thousands of these little bits of dirt with tiny plants in them that she’s always playing with…didn’t anyone teach her to SHARE?  I’ve seen her dump them out plenty of times…how did she know I wasn’t trying to help?  Oh…yeah…I dumped them in the driveway.  (I took a few to the orchard for good measure) And then I rolled on them. I ate a few too…because I love brassicas.  You know they’re really healthy and good for you,right? 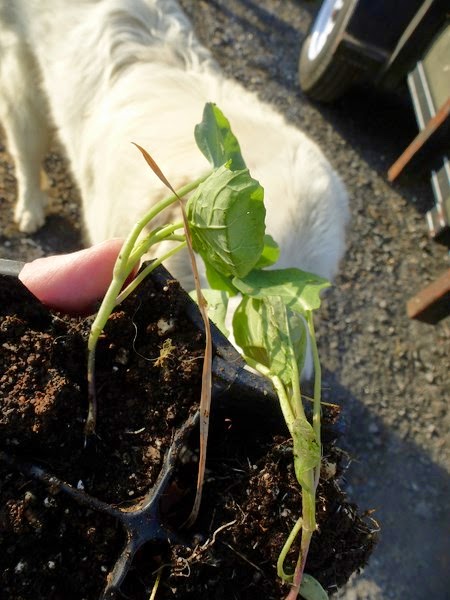 Anyway, she lost it…big time.  I think she threatened my life.  Should I let someone know about this?

After a little while, she seemed to calm down.  She got some more black plastic trays (man, I wish I had her endless supply of that stuff) and started over again.  She told me that I should be thankful she didn’t kill me.  The Boss also told me I should be thankful he didn’t get a hold of me after that incident. Later, she said that the situation wasn’t as dire as she first thought…but, she was still mad at me. I just don’t understand the two of them sometimes.

She says it's her new mantra.  I don’t know what a mantra is, but I’m pretty sure that it’s going a long way to saving my big, fluffy tail, so mantra away, Mama.  But, aren’t you supposed to put an “ohm” in there somewhere?

So, today I’m thankful for Mama’s new mantra (whatever it is). ...and here’s hopin’ she always sees me as a puppy! 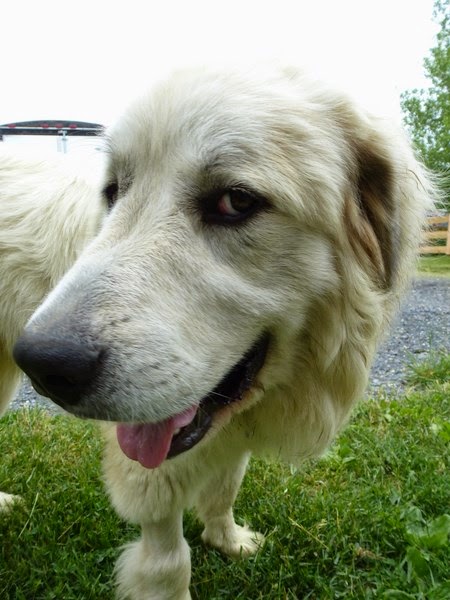