A Chicken in Every Pot

Did you know that chicken is the single most consumed meat in the US?

For the first time in history, beef consumption came in second. Think about it for a minute...chicken is on every menu in every restaurant, always available in grocery stores and farmers' markets, in almost every main dish recipe...giving some credence to Herbert Hoover's campaign promise of 1928 to have a "chicken in every pot". 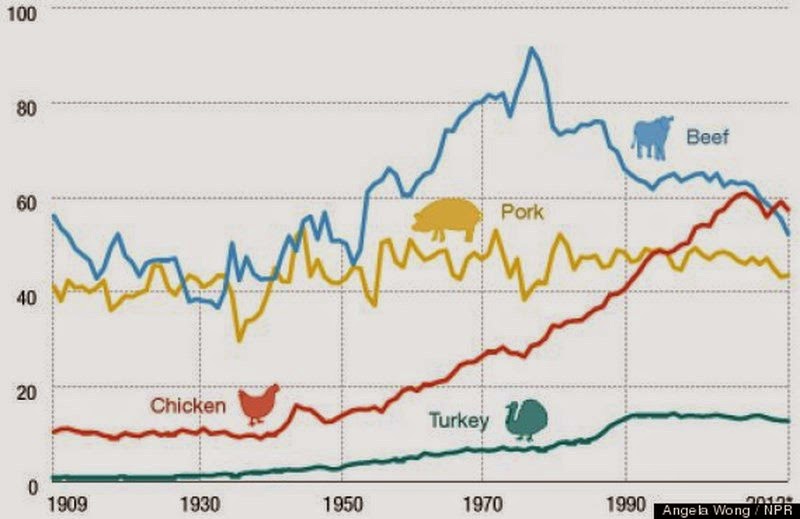 LOTS of chickens are processed in the US every year.  LOTS and LOTS. Over 8 BILLION broilers in 2012 alone.

The Boss and I have been processing broilers here on the hill for at least ten years. We make a highly efficient processing team and our chicken sales really help our bottom line.   But, we only produce 1/1,000,000,000  of the chickens produced in our state! (that puts us just slightly above microscopic size as producers)  Virginia is #8 (as of 2012) in broiler production, coming in far behind Georgia, Alabama and Arkansas.

And, no…we don’t want to produce more, even though I know we could certainly sell them.  It would be impossible to produce pastured poultry in the winter months here on the hill.  However, the constant demand for chicken in all its various presentations requires that it be available year-round.  That explains the poultry houses that you see throughout the Valley.

Most chicken producers use the same type of bird, sometimes called the Cornish Giant.  These birds grow incredibly quickly, often reaching  4 lbs. by six weeks of age! That’s without hormones or all the nasty additives you might fear. Which…for the record…are NOT allowed anyway. (nope, not even in the “industry”) These birds are just amazingly efficient at utilizing their feed. For more about our operation,  read THIS.

We’ve come a long way from eating the odd and random rooster from the laying flock.  There is absolutely no comparison when it comes to taste and texture. I had no idea there was such a difference until we made our move to the Valley. Click on and read this one.

Years ago, as part of our housewarming, we were given a gift.  A very generous gift.

We were given ten chickens.

Not live chickens, mind you, but, ten, fresh, pasture-raised chickens, all plucked and dressed and in plastic bags.

….as my mouth was saying “thank you….how very kind and generous!”  My brain was screaming… WHAT am I gonna do with TEN chickens? Ten WHOLE chickens? 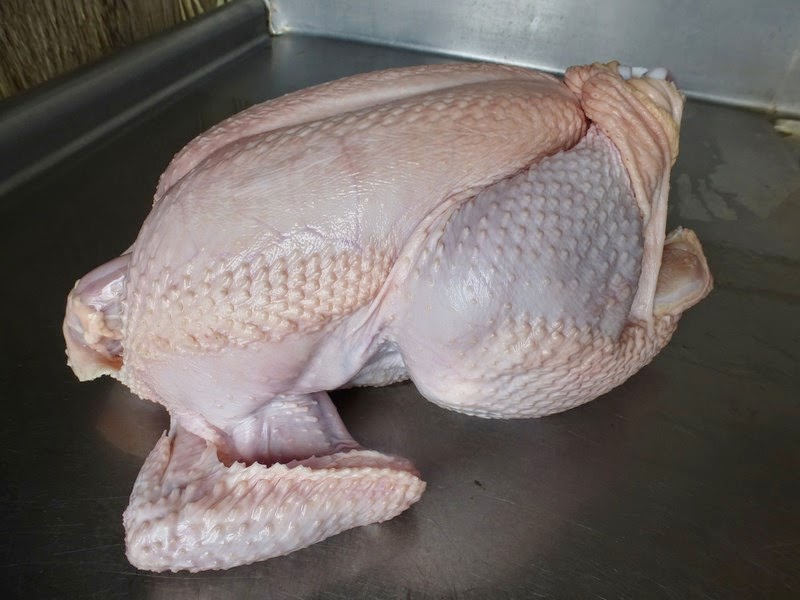 It was the WHOLE thing that threw me.  Despite the fact that I had watched countless cooking shows, been cooking for my family and others for years, and had even butchered chickens myself (okay, I helped), I had never cut up a chicken!  Up until that point in my life, when I wanted to make a chicken dish, I headed to the store, purchased whatever parts I wanted and proceeded with my recipe.

The Boss cut up that first batch for me, while our friends chuckled at my consternation. Later, I learned to do it myself and found that it wasn’t nearly as mysterious and difficult as I had thought.

When we started selling chicken at the Market, I found that WHOLE chickens were confusing/concerning to a lot of other people as well.  When I’d plunk that big, ole frozen hunk of chicken up on the scale, and some people would freak a little. “OMG…what do I do with that?!”

So we came up with a “cutting sheet” to hand out at the Market.  Check this out. 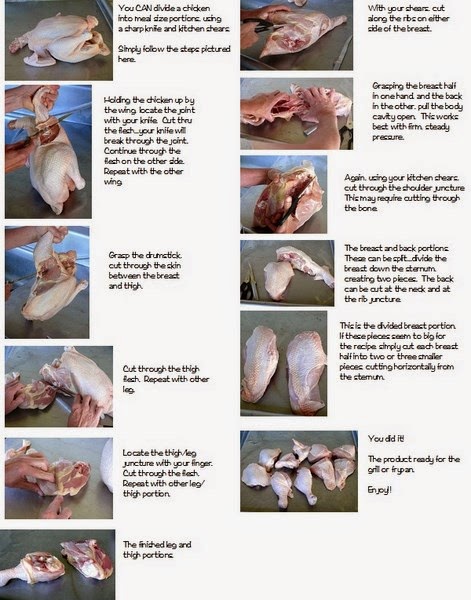 There are numerous videos on Youtube that you could watch (over and over if necessary) too. Once the chicken is cut up, you have countless options. Need ideas?  Check out this page.
Don't forget you can use the neck, back and bones to make some awesome broth for soups and gravies.  And, all those little bits that come off the bones? Excellent for chicken salad!

Sometimes the size of the chicken throws people.  “Oh, we couldn’t possibly eat all that!” well, no…neither could I (at one sitting) Our birds finish out at about five pounds.  That’s a pretty big bird. But, you can do all sorts of things with the leftovers, too.  (personally, I plan for leftover chicken, using it for lunches or possibly another meal later in the week)

Utilizing the whole bird requires a little creativity in the kitchen. But, it also gives you a great number of new and interesting options. If a whole chicken is really too big, we do sell half chickens (split right down the middle). 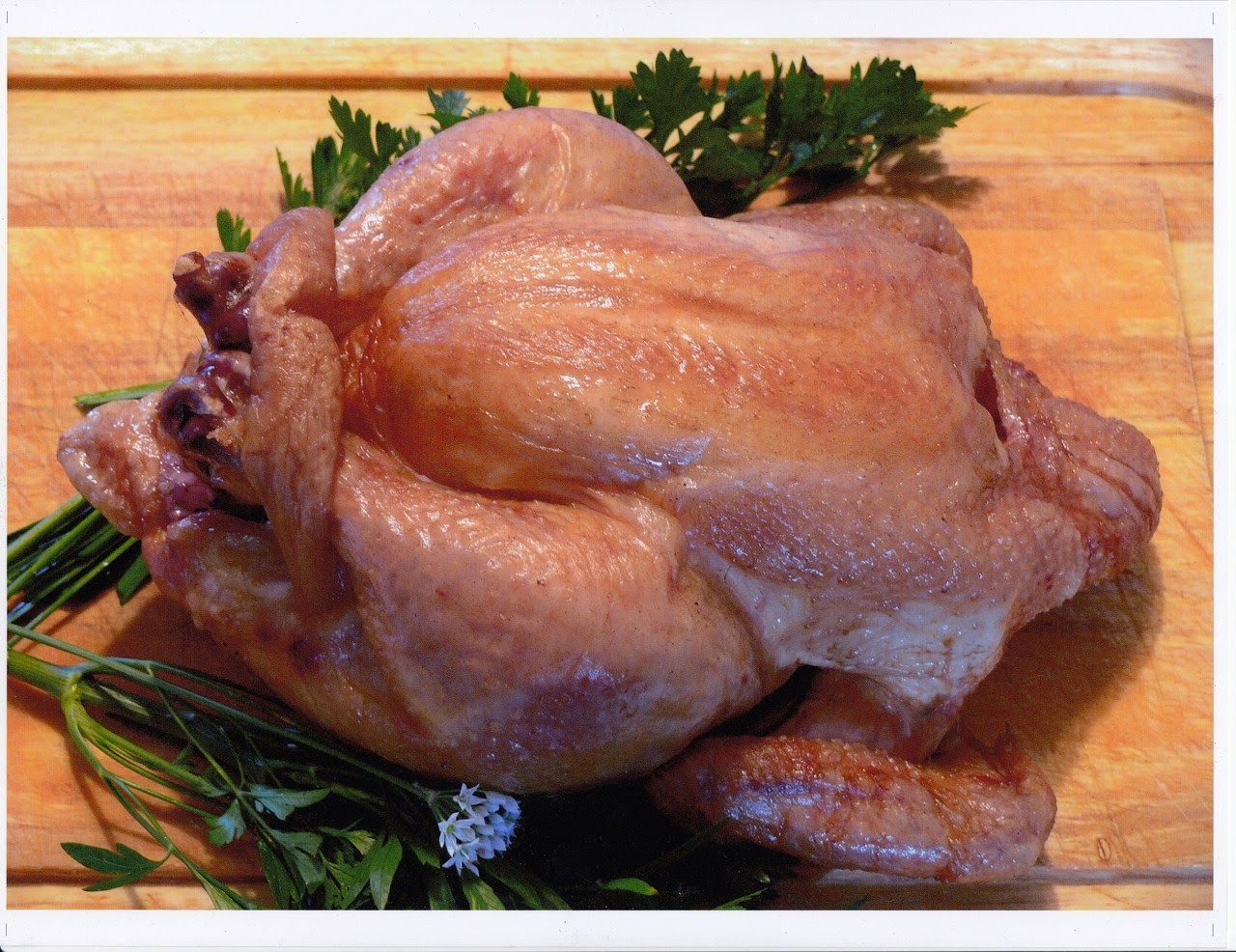 When in doubt, cook the chicken (whole, half or parts) on the grill...preferably charcoal!  Bon Appetit!