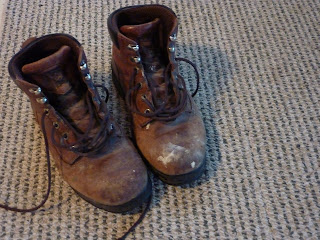 I have been betrayed.

While I can’t believe it…it’s true…and it’s a terrible feeling.

Long ago I came to terms with the fact that I would never be some tall and lithesome blonde that thrilled and scintillated everyone.  No, my somewhat short and sturdy stature is perfect for my lifestyle and occupation.

It doesn’t bother me that my bad knees kept me from sports and a lot of socialization all throughout high school.  Those two stints on crutches made me kinda cool in an odd sense of the word. That cortisone shot directly into my knee hurt incredibly, but got me walking normally the same day.

I finally realized that that weird “flopping over thing” that my right ankle does on odd and random occasions could be overcome by wearing workboots all the time. Yes, I have worn skirts with workboots. Now THAT is a fashion statement! But. it certainly beats taking a header off the front porch and/or suddenly falling over in the middle of the mall.

All those other little physical idiosyncrasies are just part of what makes me unique.

…when a gal can’t even walk down her own driveway…

I really think my body and I need to have some serious words!

It let me down, just when I needed it most.

It is finally Spring in our little corner of the world and that means that the workload just grew incrementally with that first rise of the mercury (hmmm, do thermometers still have mercury?)

Job ONE was potato planting.  Aside from harvesting the potatoes, this may be my favorite job.  It means that winter is finally over and the growing season has indeed returned. 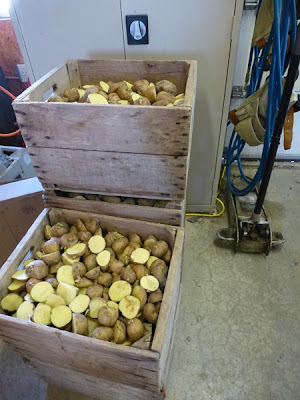 We had cut the potatoes and were just waiting until the frost thawed before we headed out to plant all those
‘taters.  While we were waiting, the Post Office called.  Oh…yikes!  Completely forgot about the new batch of broiler chicks.  OOPS! Suddenly, we were scrambling to get ready for an unexpected project that threw everything else into a tizzy.

The Boss headed out to rig up some sort of temporary brooder in the shop since the first batch of broilers was still in the real brooder due to the continued cold weather.  I set off for the Post Office to pick up the chicks.  Virginia, the Post Office Lady, loves when we get chicks.  When she is not being deafened by their incessant cheeping, she is reminded of the good old days when she used to raise turkeys, and she seems to enjoy reminiscing for a bit. 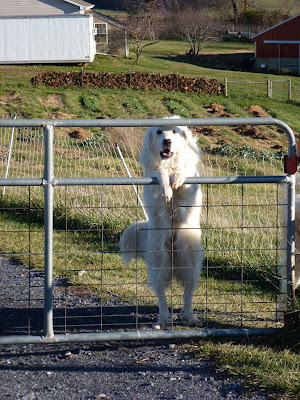 Since the Post Office is so close, I was back within minutes.  Ellie greeted me at the gate and I saw Jed trundling up the driveway toward me.  I knew that I needed to hurry. As I opened the gate, I pivoted in order to return to the Xterra.  I felt a pop, Pop, POP in my calf.   Ow, Owww, OOOOOWWWW!  Man, that hurts! It really, really hurts…but, the gate is open, the car is running, the dog is coming and the chicks are getting cold.  Pull yourself together!  Wincing from the pain, I closed the gate, rubbing my calf hoping the horrific pain would disappear.

Once I got back behind the wheel, it didn’t seem so bad.  Maybe I over-reacted.

I drove down the drive to the shop so I could deliver the chicks to the Boss. When I put both feet on the ground and tried to walk, I realized that no…no, I didn’t over-react.  *gasp* this really hurt!  The Boss commented on my weird gait and odd moaning noises.

We got the chicks settled and headed inside.  The Boss began to worry.  “What could be wrong?  You know blood clots cause leg pain…”  I adore the Boss, but this really wasn’t helping.

Since it was still too cold to get after the potato job, I began to research my injury.  I was fairly certain that I knew what happened.  I figured that I either strained or tore the calf muscle.  That Pop, Pop, POP…..OWWWWWW! indicated the classic symptoms of a torn Medial Gastrocnemius.  Further investigation revealed that it was almost certainly a tear.  I am still not certain of the severity. But, thankfully, it was not my Achilles…that would have been really bad. Before anyone offers advice…being self employed with no insurance...self-diagnosis and treatment are how we operate a lot of times. I am about 99.9% certain of my diagnosis. In situations that involve blood, or require testing equipment,  we don't hesitate to get expert treatment.

I must admit, it was more than a little bruising to my ego to find that this is quite often an age-related issue, due to overwork/overuse or being a “weekend warrior”.  Since nobody could call me a weekend warrior…I’m going with overwork.  (ha)

R.I.C.E.  is the method of treatment.  That’s REST….ICE…COMPRESSION…ELEVATION. So, find some ice, elevate the leg…where’s that ACE bandage?…grab a bunch of “Vitamin I” (that’s how us oldsters refer to IBUPROFEN), a pillow and wait.  Surely, the pain would subside. 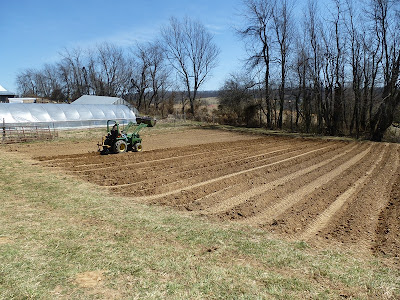 The potatoes got planted.  YAY! I was incredibly slow, but we were successful, due in part to the Boss’s cool new tool. (story to follow, I promise)  Upon completion, I returned to the couch, replaced my icepack and got some more Ibuprofen. The addition of some Arnica Montana seemed to get the pain and swelling under control.

It looks like the tables are turned for a while.  The Boss will be feeding the sheep and picking up the slack for ME while I wait for healing to take place.

There are a few things I can still get done in the meantime.  By employing the lawnmower as a mode of transportation, I can still get to the hoophouses…and most of the planting/harvesting/weeding is done on my knees anyway.  Doing the Market was an incredible challenge, but we got that done too.

A little more time, a little more ice, and a whole BUNCH of “Vitamin I”…and I’ll be back to normal before you know it.

But, in the meantime, I must say, I agree with Mick Jagger and the Rolling Stones…

“WHAT A DRAG IT IS GETTING OLD!”