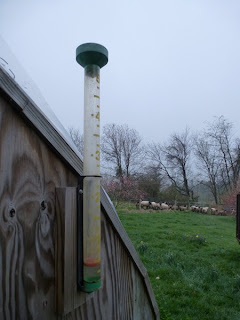 When we woke to the sound of rain, we both knew that the day was not going to go as planned.

A check of the weather indicated that the entire WEEK was not going to go as planned.

Ahhh!  Take a deep breath, re-group and re-think and go forward with the new plan.  It happens all the time, so we try to have a “plan B” somewhere in the backs of our minds. There’s always plenty to do around here, so a finding a new project is not much of a challenge.  Sometimes they just appear…

When the rain let up, we headed out to do barn chores…the sheep were already complaining and milling around the back of the barn. The cats and dog were following along, looking for a hand-out…

Wait a minute!  We have two dogs….

When she didn’t instantly appear, bounding happily toward me, I began to get a little worried. As we called several more times, she came skulking down the barn path. She actually looked a little embarrassed.

What on earth happened to YOU? 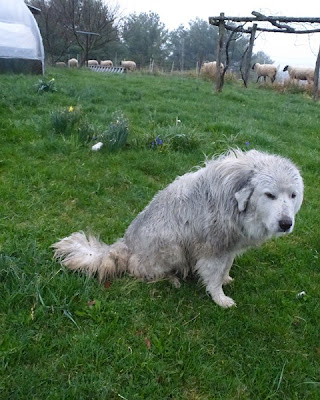 Her usually lustrous white fur was dull and dark…did it have gravel dust in it?  Then we got a whiff…

Aw, Ellie! Won’t you ever learn?

The Boss was the first to identify the smell…no…stench that was emanating from her.  Skunk…Big time SKUNK!  Blech

As is always the case in the dogs tangling with a skunk, we were on our way elsewhere.  Not wanting to smell like a wet, skunky dog for our trip to town, we put off the clean-up job.  But, I did add “de-skunkifying” items to my shopping list.

Now, quite honestly, I did NOT want to clean skunk scent off a dog, particularly a dog that was also full of gravel dust, and smelling particularly doggy anyway.  Ellie Mae is also rather skittish sometimes.  I had no idea what she would do when I began the attempt at clean up.  Unlike most dogs of my acquaintance, she will run away if you turn the hose on her (even on a hot day).

Of course, Jed wanted to "help". 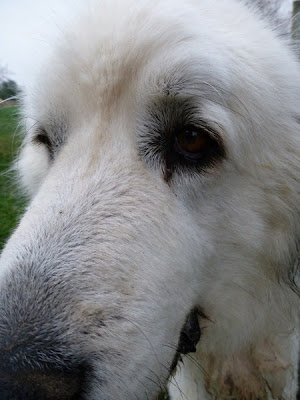 Jed’s idea of “helping” is to plant his 100+ pound body directly in front of whatever you decide to do or put his huge doggy face right next to yours...complete with canine breath and copious amounts of drool.  Bend over to tie your boots; he puts his nose in your face. Sit down; he will try to get in your lap.  Do anything to Ellie, he jumps on her, bites her, and rolls on the ground…trying to start a game.

This was going to be fun…NOT!

Jed was banished to the barn. 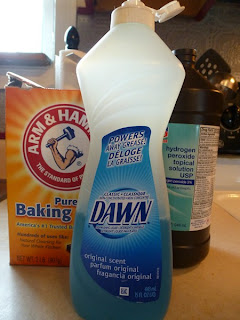 I decided to try the Dawn dishsoap/peroxide/baking soda treatment that has been making the rounds on the internet.  I also bought some enzymatic “de-skunk” stuff at the Farm Bureau (it seemed to work to some degree the last time) as a back-up. Here's the story of another skunk incident. 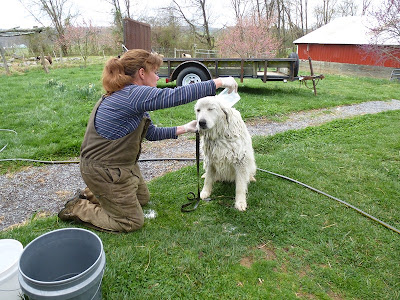 Amazingly, Ellie sat calmly as I scrubbed the solution into her long fur. 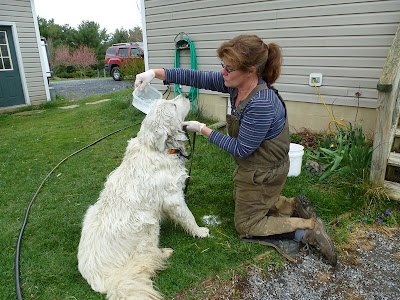 She didn’t even mind when I dumped water over her with a little bucket. 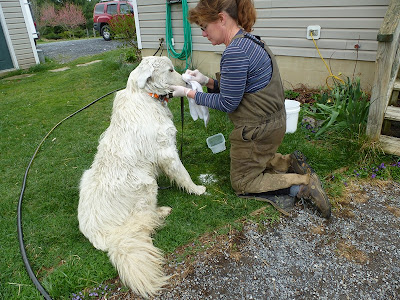 She closed her eyes when I rubbed her nose with a washcloth. She must have been desperate to be cleaned because she didn’t even budge when I turned on the hose!

I was pleasantly surprised that the Dawn solution worked…it worked quite well! The skunk smell was gone.

No longer stinky…she frolicked around the back yard, with what looked like a smile on her face. The cats and Jed were no longer avoiding her. Life was good. 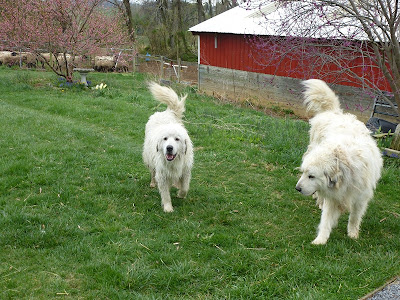 The Boss insisted that she still smelled somewhat like a skunk.  I didn’t get that…I thought she had been rid of the terrible stench and just smelled wet and doggy.

Then, I looked down….
ooooh….that might explain it.  My coveralls!  Yep, my coveralls are probably more dirty and smelly than anything else here on the farm.  No wonder I couldn’t smell the dog!

Wonder if the Dawn/peroxide/baking soda solution would work on this mess?
hmmmm, looks like a new project just appeared.