Farewell to a Neighbor 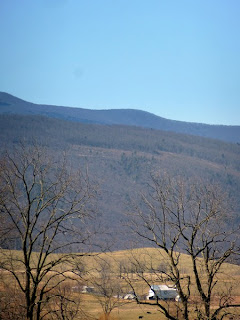 Over the weekend, one of our elderly neighbors passed on to his reward.  While this news didn’t really come as a shock as he was quite elderly and in failing health, I was surprised by my own sense of loss.

Old Mr. H was part of the landscape…he was as much a part of the scenery as the mountains and the fields in our little part of the world. At one time, hardly a day passed that we didn’t see him somewhere along the way.  He was perhaps one of the first neighbors I began to recognize by sight when we first moved here so long ago.  As a full-time farmer, he was often spotted driving his tractor, hauling hay or equipment or just putt-putting down the road.  We would always wave, because in this part of the world, you always “smile and wave to the man up on the tractor”. If we went out early on a Sunday, there he was…looking dapper in his church clothes complete with bowtie…driving his ancient blue sedan to services at the Presbyterian Church. 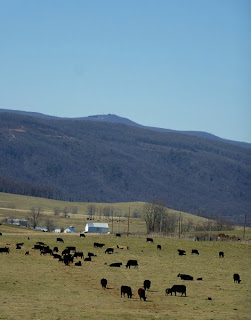 The first time I met Mr. H, I was struck by his sense of kind neighborliness.  Yes, despite the awful circumstances, he was really nice…a little gruff…but definitely nice.

You see, the first time I actually spoke directly to Mr. H, I had to introduce myself and tell him that…well…I ran over his dog. Not just any dog…one of his guardian animals.  Great introduction, huh?

I had done my very best to avoid that dog, swerving to the other side of the road.  But, the sickening thump told me that my best hadn’t been quite good enough. I had never hurt anything with a vehicle before…and I felt just awful walking across the road to where Mr. H was working to tell him what happened.  He only had one question…
"Was he in the road?"

"It wasn’t your fault.  He was in the road." His tone was kind, he didn’t yell and fuss…unlike his hired man who was fussing and fuming and really making me feel bad.

Before I could finish, he said, “I know you...I know your name and where you live.  It’s all right.  We’ll take care of it. It’s not your fault”   It was evident the conversation was over.

Later, through communication with the family, I found out that the dog indeed survived. While that fact was a relief, I still remember that day.

Years passed and we saw less of Mr. H.

When he retired from farming, his daughter took over the family operation.  She was looking for a farmhand for summertime, and hired Blondie to help around the place.  As Blondie only had her learner's permit to drive, either the Boss or I would accompany her on her trips down the road.  This granted us the opportunity to sit and talk to Mr. H while Blondie fed the critters in his barn.  Those were some interesting conversations about farming in the old days….and pet lambs.

Life shifted again, and we saw even less of Mr. H.  His wife’s declining health was taxing their family, and our family was changing too. The girls got jobs in town…they met fellas.   A few waves here and there…a quick word when he’d pass us as the girls and I took long rambles with the dog.

But, there was one last encounter with old Mr. H that I will always hold dear. During what was the most stressful period of my entire life, following the whole horrifying wreck ordeal…if you are wondering…the short version is here.…I heard from Mr. H.  He would call once a week just to “see how that girl of yours is doin’ “ After a quick update, he would promise prayers, and hang up. He continued to do this from the time he heard the news until I gave him the report that she would indeed walk again. Every week for a couple of months…he was amazingly predictable and quite comforting. 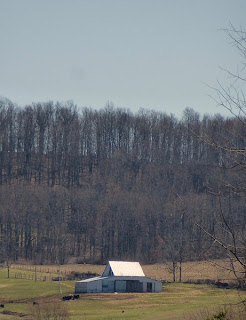 He knew our injured daughter only from her job at the local TSC store…and seeing her walking her dog.  He always mentioned seeing her walk her dog.  He didn’t have to call…lots of people (including some family) didn’t. But, call he did...and it meant so much to a very worried, stressed-out mama.

I'm sorry I never got to tell him just how much he touched my heart and helped me through a hard time.

You will be missed.