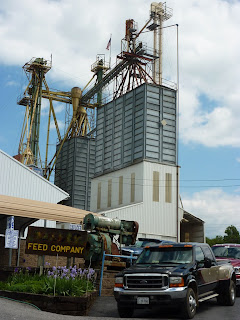 First thing Monday morning, I head out to town. The first stop is generally the feedstore, followed by the bank, the groceries, the gas station…well, you get the picture.

I really enjoy going to the feedstore. There are some great storytellers that always have a story to share. It’s one of the most interesting stops on my very busy day.

This morning was no exception. The historic weekend snowstorm had caused a power outage which had somehow affected the computer system, there were big deliveries to make, the phone was ringing off the hook…it was BUSY!

“Mrjim” and I exchanged pleasantries as he loaded the feed in the back of the pick-up. I thanked him and headed out to finish my errands. For some reason, every stop seemed to take longer than expected. I didn’t get home until sometime after noon.

The Boss had been busy all morning doing farm work, so we ate lunch before we began unloading the truck. When we began to unload, we noticed what looked like sand in the bed of the truck. “What’s that?” …hmm, looked like a feed bag broke. No big deal, we’ll just use that one first….wait a minute! WHAT is that stuff?

Closer examination revealed that some of the bags were NOT what they were supposed to be. Not only that, but one was broken and spilling its contents all over the back of the truck. While this was a nuisance, and required a trip back to town, it wasn’t a real big deal. But, if I didn’t go, the chicks were going to get hungry real soon.

I hopped back in the truck, drove back to town, amusing myself on the way by counting the number of neighboring farmers who were returning to work after lunching at the Meating Place. (Yes, that IS really the name!) I know I counted at least five! It was a pretty day, the songs on the radio were good ones; I really didn’t mind the trip.

I explained the mix-up at the feedstore office. No problem, just go tell “Mrjim”. “Mrjim” saw me before I saw him, and he was hurrying out to get me the right bags. It was an honest mistake, the storage bays are right next to one another. He apologized profusely; I laughingly told him it really wasn’t a problem. We exchanged pleasantries again, and I headed back out.

While I was pumping the gas, the feedsacks in the back of the truck shifted around. As I looked at them, I realized one of the ones I had just picked up had a green tag. This may not seem like a big deal, but the feedstore color codes their feed bag labels. While I am not certain of the system, I know that Sheep feed is green, chicken feed is tan, and grains are white. I took a closer look at the green tag…it had a RABBIT on it! Yep, somehow, this time I got rabbit pellets.

Since I was about 2 minutes from the feedstore, I drove back. When I arrived, no one was in sight. I looked around, and as I headed back to the truck…here comes “Mrjim”.

As soon as he saw me, he started shaking his head. “What did I do this time?”

HUH?? He jumped up in the back of the truck. “Well, I’ll be danged!” he said. “What in the world is goin’ on? Those guys must be messin’ with me! Your husband is gonna skin me alive when he finds out about all this!”

He got out the forklift, pulled down the whole pallet and we couldn’t find any more rabbit pellets in the stack. Once he satisfied himself that we actually had the right thing on the truck, he said “waaaalll, girl….as much as I like talkin’ to ya…don’t come back too soon!” A shared hearty laugh and I headed out for the old homestead once again.

I must admit, I had a very wicked urge to turn around at the stockyard, run up to the mill and say…”….hey, Mrjim…..” But, that would have been mean.

Instead, I laughed all the way home!
Posted by Barbara at 7:38 PM