I have been trying to work out the logistics of getting the barn kitties to the vet for their shots since we got the reminder card back in August. 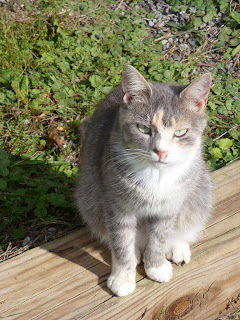 Trying to round up three barn cats, arrange an appointment around our farm schedule and the vet’s schedule is proving to be a task beyond the scope of my ability.

There are several days during the week that I cannot schedule a trip to the veterinarian’s office for there are far too many farm jobs to do. The vet won’t let you just “pop” in for shots anymore; the office is far too busy. I need to call ahead. They are not opened on the weekends. Then there is the cat round up…

That should have been the easy part. Ordinarily, all the barn cats, the dogs and the sheep are milling about the barn in the early morning looking for something to eat. Recently, Booooyyyy has decided that he is some mighty hunter and has been roaming the neighborhood. (All our kitties are “fixed” so procreation is not a worry) Sometimes he’s here…sometimes not. After a few days of freaking out and calling the neighbors, I have adjusted to his new wildly independent behavior.

Last week, I decided it was time to get to the vet’s office. I found and corralled the two girls with little incident. I figured Booooyyyy would show up shortly. After two and a half hours of the girls yowling away in the cat cage, and no sign of Booooyyyy, I let them out. The noise was more than I (or the dogs) could take. He came wandering in a couple of hours later, complaining that HE hadn’t been fed. I decided to bail on the vet trip for the week. In my frustration, I left the cat cage in the barn.

However, it was slightly ironic and majorly annoying when I found Booooyyyy taking his Saturday afternoon nap INSIDE the cat cage. 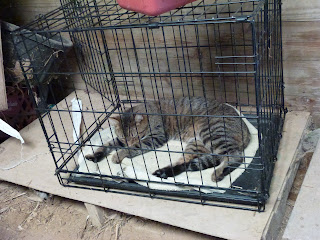 Sunday afternoon, Sissie decided to take HER nap inside the cat cage. 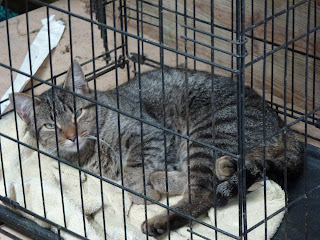 If I could only convince them ALL to sleep in the cat cage…say, Monday, Tuesday or Wednesday night…I might just get them to the vet this week.
Posted by Barbara at 2:33 PM