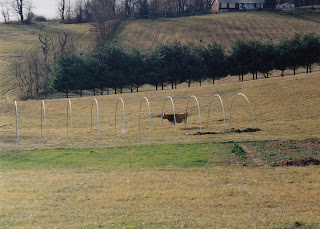 Hoophouse #1 is one of the older structures here on the hill. It became part of the landscape in late 1997. We owe a debt of gratitude to Buzz and CJ for helping “skin” it that first time. You guys will always have a special place in our hearts (and that’s just one of the reasons). 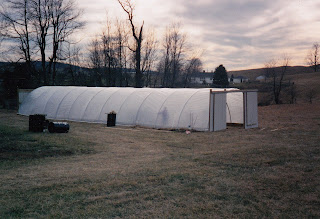 We built it to use as winter housing for the 300 Rhode Island Reds that would spend the rest of the year as pastured egg layers. 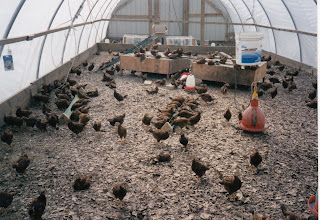 It was our intention from the start to use part of this structure as a greenhouse, or plant starting area. 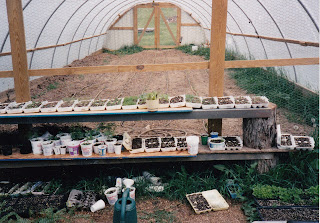 We didn’t intend for it to become a year-round growing venture. But, the chickens were only in it for a short period every year, and real estate is at a premium around here. During the summers we tried corn, tomatoes, and melons among other things. We finally found that broccoli planted in March provided the best return. 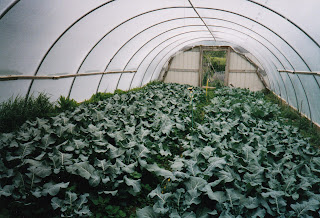 When we got out of the wholesale egg business, the hoophouse could be used for growing year-round. This makes it possible to have salads when there is snow on the ground.

I need to take a minute to explain our “hoophouses”. Known by a number of names: poly tunnels, hoophouses, high tunnels, and even cold-houses/frames, the idea is the same. They have a metal hoop structure to provide stability, are covered with some type of plastic coating, and are un-heated growing spaces. This is completely different than a greenhouse which has some source of constant heat, making it possible to grow warm weather crops year round. While daytime temperatures will get incredibly warm, even during the winter months, freezing temperatures at night are commonplace during the winter. The crops chosen for use in the hoophouse must be able to withstand these temperature fluctuations. 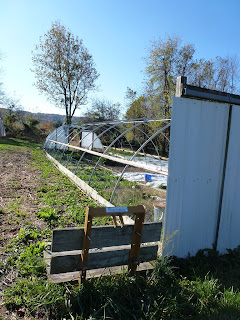 Since the hoophouses are just covered with a thin “skin” of plastic, from time to time this must be repaired or replaced. Generally, we get about 4 or 5 years from a “skin”. This time, we really needed to get more ventilation in the structure. Then, someone (who apparently did not know her own strength) poked a hole in the very top while removing snow. Since the “skin” was compromised, we solved the ventilation issue with a utility knife on the side. 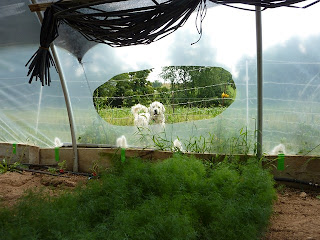 This course of action prompted us to “re-skin” a little sooner than normal.

Tuesday was chosen to be “the day”. 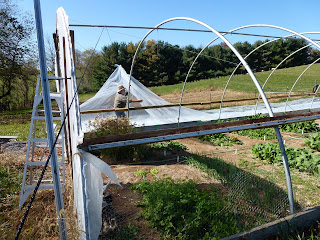 It is imperative that the “skinning” day be slightly warm, this makes the plastic stretch nicely so it won’t flop around later. It also needs to be a calm day. This is in fact a very relative term, as the air is never still here on the hill. Thankfully, it was just slightly breezy so the Boss and I didn’t go sailing over the rooftops of M’brook. Wind is the number one concern in using hoop structures in our particular location.

Years ago, we did have a “blow-out” during an incredible windstorm. I looked out the upstairs window to see the entire side of the hoophouse waving at me in the wind. YIKES! Amazingly, we incurred very little actual damage that time. Thankfully, we have never had a collapse, even when the snow drifted nearly to the top during the blizzard of ’09. 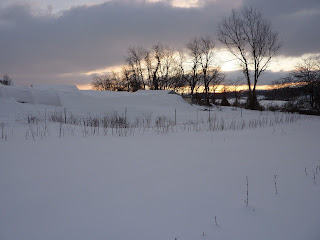 We spent the afternoon stretching and attaching the plastic to the structure. 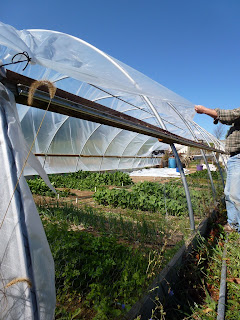 With the “wiggle wire” that locks into a special poly-lock channel, this job goes fairly quickly. 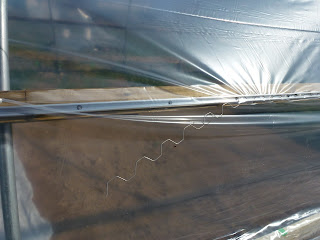 That would be quickly compared to our old way of rolling the extra plastic over boards and screwing them to the band board at the bottom of the house. That was an all day family event sometimes.

Now that the new “skin” is on, we can roll up both sides on hot days to get cross ventilation going for the lettuce. Combined with the shade cloth, we hope that will make summer time growing even more successful than in the past. However, we won’t be trying any of this until sometime next year. 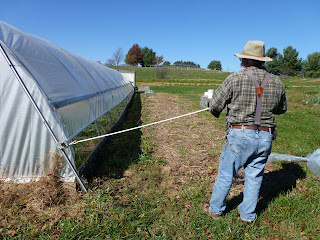 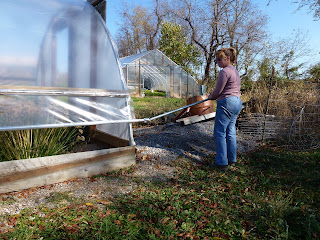 Next week, we’ll plant the last of the seedlings to take us into the winter harvest season. Then, we will look forward to picking all winter. To be in the hoophouse on a sunny, winter day can be a delight. 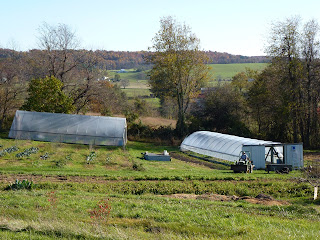 It looks like we got that plastic on just in time. The “S” word is in the forecast for the weekend!
Posted by Barbara at 7:01 AM