Keep an Ear out for the Weather 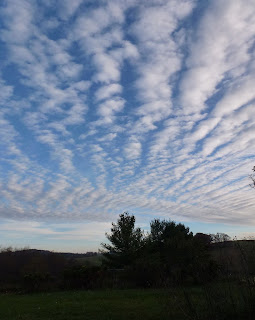 Some years ago, I crossed paths with “Papaw” while I was over in Draft running errands. There was a prediction for a big winter storm coming, so I asked his opinion. (Papaw is one of the few folks around who can read the signs in the woods and weather with great accuracy.)

“Hmmm”…”well, I saw a bunch of sundogs this week,” he said. Sundogs are those little prism-y things that you sometimes see in the sky. The old timers point out that they indicate precipitation coming. It has something to do with the humidity and ice crystals at the upper levels of the atmosphere. Yes, there is scientific evidence for this one.

“…and the clouds….look at ‘em” as we stood squinting up at the sky, discussing clouds and the possibility of precipitation, I was startled to hear the train coming. Startled because we were more than a mile from the closest crossing and it sounded as if it was coming through the parking lot where we were standing. “Uh oh,” he said, “ya know where that train is…right? When you can hear the train that clear this far away, it means we’re in for snow (or rain) in the next 24 to 48 hours. That’s what my daddy always said. You can tell by the train whistle…just listen!” When I asked why, he admitted he didn’t really know. He thought it had something to do with the atmosphere and the humidity. After we parted ways, I thought over our conversation.

When I found myself shoveling a couple days later, I began to pay attention to my surroundings just a little more. I’ve known for years that you can feel imminent snow fall, you can even smell it…but, I never thought about listening for it!

The train doesn’t run through M’brook. That’s one of the reasons M’brook faded from Augusta County history years ago. However, the train runs on the other side of the mountains and comes through Buffalo Gap and Swoope. Most days we can only hear the whistle in the distance as it warns the public that the train is crossing the roads. When the weather is right, we can hear the low rumble as it makes its way along the base of the mountains on its way to the coalfields of WVA. That’s when you know that we better get out the raincoats and galoshes or the snow shovel. 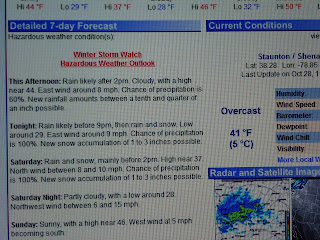 This morning when I saw the weather page with its prediction of snow and a considerable accumulation, I immediately thought of Papaw’s weather advice.
When I walked outside, the sky LOOKED like it might snow. 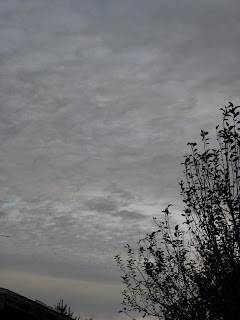 I kept listening for the train. Did I hear it?

Late this afternoon, I heard the rumble of the train. Then, and only then did I begin to look for the snowflakes.

Shortly after supper, I looked out the back door…and there they were. Lots and LOTS of snowflakes! This is going to make for an “interesting” (to say the least) Farmers’ Market in the morning. 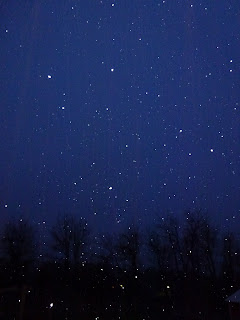 I just wish the train had let me know how much snow to expect. Next time, maybe I should listen a little more closely.
Posted by Barbara at 7:40 PM