Let's Get this Thing in Perspective

As I headed out to the Post Office to pick up the last batch of broiler chicks, things were looking pretty good. We had accomplished a great deal the day before, and we were on track to keep on schedule again. 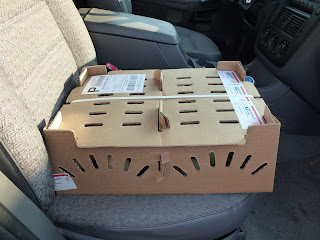 The box of chicks seemed rather “subdued” on the ride up the hill. Ordinarily, the chicks are peeping loudly, very loudly, announcing their need for food and water and freedom. This batch was making noise, but not at the level I have come to expect.

Upon opening the box, we discovered that a proportionally large number of them were dead, several were dying, and even more didn’t look too good. Ugh! Not a good way to start a project. It looked like they must have gotten too cold in transit, as all the dead ones were in the same compartment. An email was dispatched to the hatchery, and we went off to our various projects for the day. The dead chicks were a real bummer.

Somehow that seemed to color our thinking about everything. The weeds were suddenly bigger, the bugs suddenly more destructive, the weather hotter, the job list longer. (you get the idea) Things that seemed just “part of the deal” suddenly seemed insurmountable.

Then I remembered a story I had read about earlier in the day. In all the flooding from Irene last weekend, Vermont took some of the most significant agricultural damage. I had been keeping up with a story about the Brattleboro Farmers Market. This led me to the story of Evening Star Farm. While they were not the only ones to incur damage, the small farm similarites caught my attention.

Evening Star Farm is a CSA farm in Cuttingville, VT. (check them out on Facebook, look up their website) These young farmers were enjoying a successful first year on their farm. Then the floods came through. 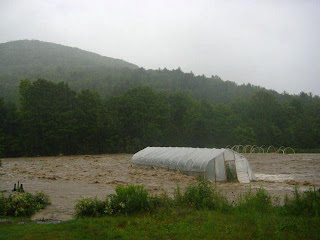 In a single event, hoophouses, gardens, tools, their dreams and aspirations were all washed away. While the community has come together in an amazing way to help them re-build, the enormity of the task may be insurmountable. 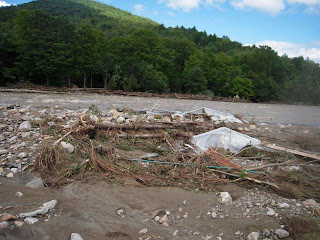 That made me realize that I was just feeling sorry for myself, letting a small problem affect my day when it shouldn’t have even been a “blip on the radar”. The hatchery will refund the money for the lost chicks, we can weed a little more, battle the bugs a little aggressively, and so on.

While the work remains, so do the possibilities for next year. We didn’t see our lives wash downstream like the folks in Vermont.