We must be NUTS! 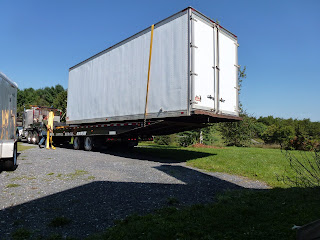 Yesterday we bought a 26-foot “reefer” body. WHAT were we thinking? That’s huge! Surely there was a better solution for storing crops. 26 feet?!?! Are we NUTS?!? Yes, buyer’s remorse hit with gusto. But, the deal was done, now to get the thing here.

You don’t just hook a "reefer" body on the back of the truck and tool on down the interstate. Nope! We only bought the box, no chassis or wheels. You must hire a professional towing company.

A phone call to Bobby’s Towing and we were in business. For a price, they would go to H’burg, load up the reefer on a trailer, haul it here, and put it in place. Or, at least that was the plan.

Tom had been worrying over this part of the venture since last night. At some point he realized that the neutral wire that hangs from pole to pole across the lane might just be too low for this monstrosity to fit under. As a former “vepcovian” (VA Power electrician) all sorts of safety issues pray on his mind that never occur to the rest of us mortals. He measured, he got out his bodendick stick (a special device for moving electrical wires), and he went to wait for the truck.

Since I knew this would be blog-worthy, I set up out front to take pictures. Soon, I could hear a big truck jake-braking down M’brook Road. Hmmm, that must be them. Hmmm, that sounds REALLY big. From my vantage point I could see them turn on Mish Barn Road, the rig, the trailer…finally I could see the box. 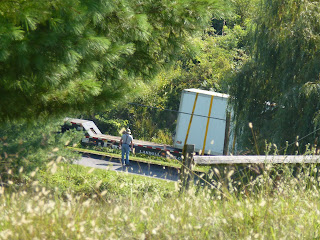 Oh my! The rig was ginormous! I began to wonder if it could make the turn to come up the lane. Would it clear the wire? Would the bridge hold up? Could they make the turn into the driveway? Wow…so close…. 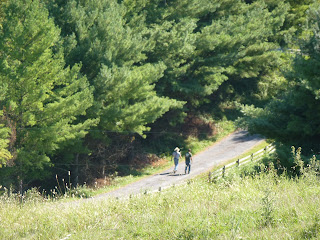 I got a sinking feeling in the pit of my stomach when Tom and the driver began to walk up the lane.

But, they cleared the wire… 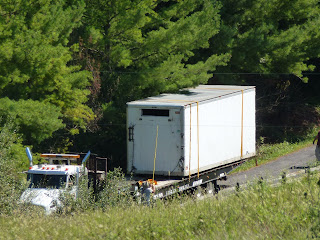 the bridge held out… 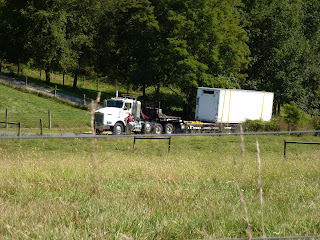 then they decided to back into the driveway. 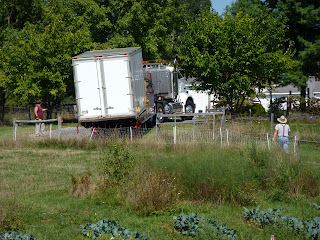 Easy does it fellas! 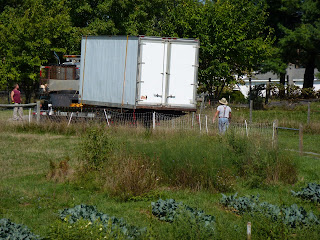 Well, humph! Now what? The rig was too big to pull down to set the reefer body off where we really wanted it placed. 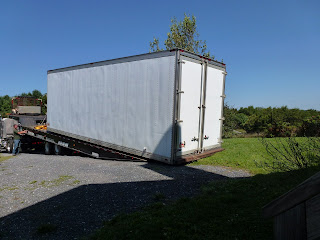 They got it off the trailer, and thought it could be pulled with our Dodge. The helper-dude said we needed a FORD! They hooked their chains to Tom’s truck…it pulled a little way…and started spinning. 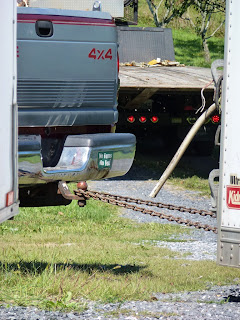 The helper-dude said we REALLY needed a FORD! After several attempts, Tom settled up with them and sent them on their way. At $95.00 an hour, this was getting expensive! Surely, we could think of something.

What to do? He said we could use the truck AND the tractor…then we could get it done. I said I needed LUNCH because I was almost “done”. He continued to think out loud…we do have friends with BIG tractors…maybe a backhoe….we could put poles under it… 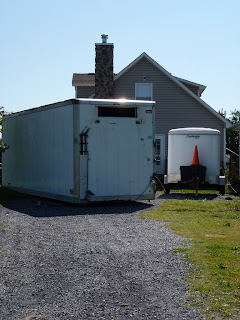 Maybe we get used to it in the middle of the driveway?

After lunch, he went it on his own. And, the following photos prove that Dodge is indeed RAM tough! Sorry, T-bone. 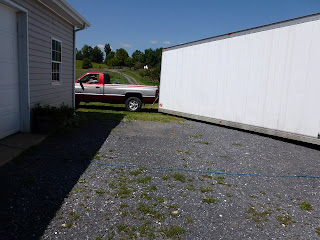 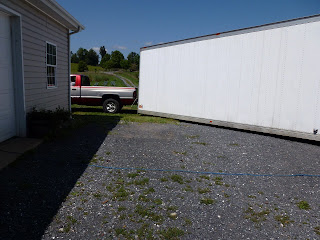 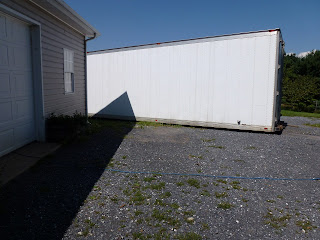 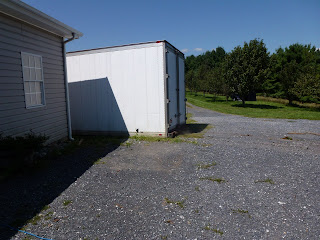 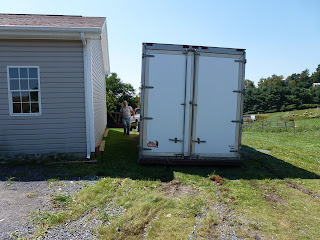 With a little further manipulation, Tom pushing with the tractor, me driving the truck to pull, we got it in place! Yippee!

A little cleaning, a little leveling, the usual 49 trips to Lowe’s and then Tom will be able to put the cooling unit and partition in it and we will be good to go…just in time to harvest all them ‘taters!

Buyer’s remorse behind us, anticipation of better management ahead of us, we know we are NOT nuts after all. (not this time) 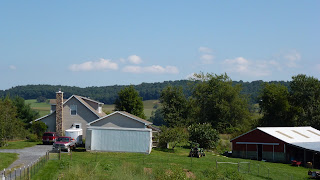