A Multitude of Mushrooms

As I returned home the other day, I glanced up the hill toward the house as I turned in the lane. I have made it a habit to check things out as I approach the old homestead….never know what odd and/or random thing may be happening.

Wait! What is that under the pine trees? 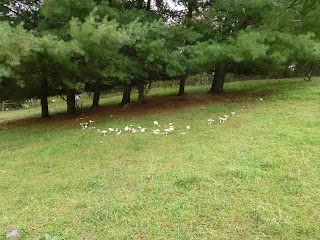 I headed out to check it out. Of course, since the sheep are in that paddock, they went along to “help”. That always keeps things interesting.

The pine trees grow in several large groups out front. In the history of this piece of land, at one point someone wanted to start a Christmas tree farm. The next owner thought this was a completely stupid idea, and attempted to bush hog everything. The land is hilly and lumpy and a fair number of trees escaped the bush hog. That was about 20 years ago, so the trees are quite large now.

As I rounded the first group of trees, I could finally identify the “stuff” I had seen from the lane.

It was MUSHROOMS! Bunches and bunches (and bunches!) of mushrooms. 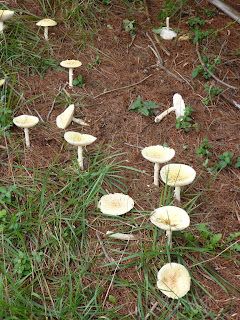 Mushrooms kinda freak me out. I immediately assume that they’re all highly poisonous. (I think this is baggage from reading Babar the elephant as a small child.) There were all kinds of mushrooms: yellow, red, white, puffballs, some slimy mushrooms and some that defied description. Yikes! 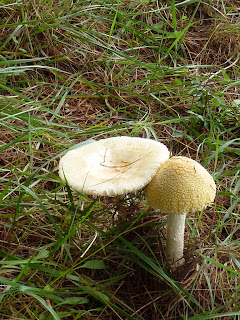 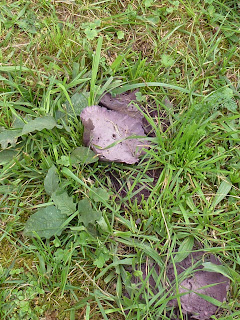 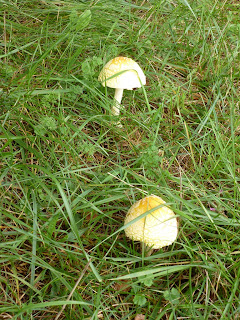 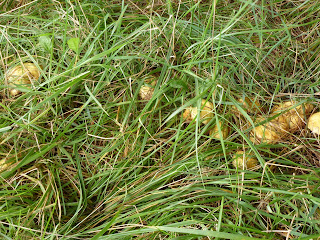 The sheep were in this paddock. Had they eaten the mushrooms? Would the mushrooms hurt them? There were lots of damaged mushrooms. I couldn’t tell if they had been eaten, or just walked on. I know nothing about mushroom identification. Sure wish “papaw” hadn’t sworn off the “ ‘puter”! I could have emailed him some pics and he could have identified them. As that wasn’t an option, I put the helpful sheep in another paddock for safe measure, and did some internet research.

My internet research revealed that I don’t have anything to worry about. It doesn’t appear that they are highly toxic. And, as the Boss pointed out, the sheep probably won’t eat them anyway with all the grass available. Although, I am fairly certain that a couple of the "characters" had to at least taste one.

It would appear that weather conditions were just perfect for great mushroom growth for the first time in our history with this piece of property. It is just part of the growth habit of this particular species to grow around coniferous trees.

Well, that’s one for the books! We’re supposed to get some real cold weather later this week, so that will spell the end for the mushrooms.