As the sleeping lambs wake and stretch, I continue my rounds in the barn.  Jostling a few here and there, clapping my hands, I rouse the others.

In the winter time, morning chores start with a wake-up call for all the lambs.  Only after I’ve watched them all get up, stretch and react to the morning do I go and get the grain bucket.

I don’t do this simply because I like the whole “wake-up” duty.  Although I am pretty good at it, having honed my skills on a very hard-to-rouse teenager some years ago.  Part of my job as shepherd is to assess health, and there’s no better way to do that than to observe a lamb as it wakens.

Healthy, hearty lambs stand up and
str-e-e-e-e-e-tch, then they shake themselves and make some sort of little noise as they head off to find mama and get their little sip of morning milk.  At this point, they generally play with the other lambs, leaping and running around the barnlot.  Any other type of behavior generally indicates poor health.

So, when I saw one little girl hunched up under the light, I got a little concerned.  Realizing it was the same one that had been screaming intermittently for the better part of two days, I got even more concerned. It was obvious that she was chilled when I picked her up, her little hooves were like ice and her ears were very cold.  But she would suck my finger and her mouth was warm inside.

At first I put a little jacket on her, hoping if she retained some of her own body heat she would feel better.  I also gave her a little dose of vitamins…sometimes that helps.  Nope, she just stood there with her back hunched and looked miserable. As the smallest of a set of triplets, she’s been on my radar for a couple of days.

She was quite cold, she wasn’t yelling anymore, and she was fairly lethargic.  *sigh*  It was time to head to the “hospital pen”.  Tucked inside my makeshift hospital with the original bottle lamb, she still didn’t have much kick.  He seemed to appreciate the company, though and after he downed his bottle, he snuggled in for a nap under the light.  After she warmed for a while, I attempted giving her a bottle. (after being with her mom for nearly a week, I figured this adjustment would take a while) She drained every drop!

By the next check, she had figured out the whole bottle thing completely.  She drank all of her own bottle and tried to drink his.  Within twenty-four hours, she had completely revived and was hollering away every time she didn’t get a bottle. Then, they figured out how to escape and look for bottles on their own.  (the Boss was called in to rectify the situation)

So, it looks like I have become a mother yet again.

We now have two lambs living in the shop…hoping for warm weather so they can relocate to the barn.  Right now, I’m thinking it will be July before they move.(...oh...the weather...)

As a testament to my “utter creativity” when it comes to naming animals, they have become “Mouthy” and “Pooter”.  Why? You ask.  Well, because she is….and unfortunately, well…he does. …and it’s funny. Believe me…right now I need funny.  The horribly cold weather is making farm life fairly miserable for man and beast. All the animals are eating constantly just to maintain their body temperature. We’re staying busy checking on them all, hauling hay and water and the Boss has to gather the eggs every hour just so they won’t freeze.

Then there is the ever insistent… 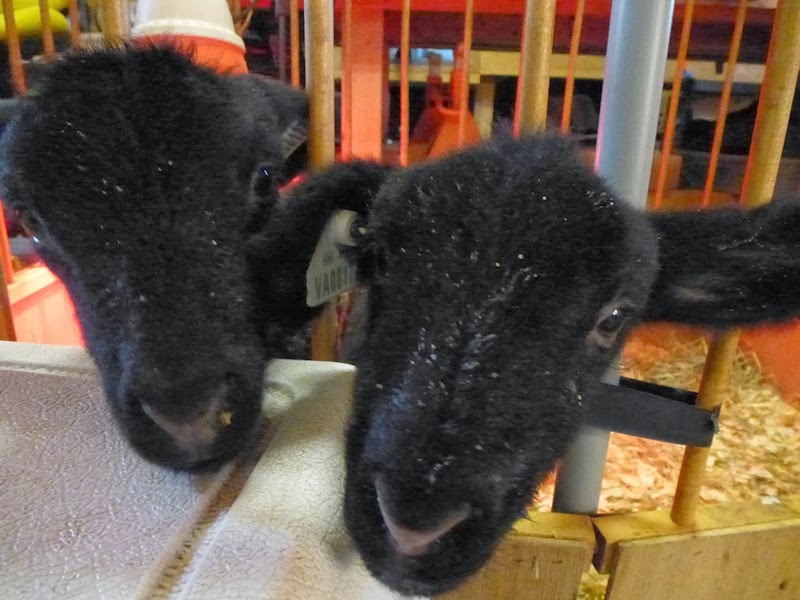 ‘scuse me…I am being summoned.