Havoc in the House

(or why sheep really belong in the barn/outside/somewhere...anywhere...else)

He was so tiny and fragile, so cold and needy.  Human intervention was a true necessity. So, we tucked him in a towel and placed him next to the woodstove after getting a little milk down his tiny throat by "tubing" him. (a soft rubber tube was placed down his throat  and milk added to a syringe and drained directly into his stomach)

His survival was fairly uncertain.  I had honestly thought he was dead when I first pulled him from his mother’s warm womb, but he had revived and she had provided what care and attention a mother sheep can provide. But, he was so small, his siblings so large, that the chances of his being able to compete for the life-giving nourishment was pretty slim. The heat of the lamp in the barn wasn’t doing much to keep him warm, either.

His tiny hooves hadn’t even hardened when I brought him indoors, so for him to even stand was a challenge. (did you know that lambs hooves are covered with a soft, gelatinous covering when they are born?  This protects the mother’s delicate insides as the baby slides out.  The hooves harden after birth.  Nature IS amazing!) 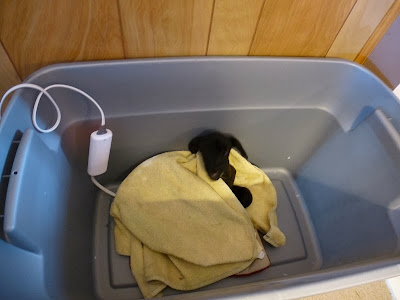 Leaving him in a box with a heating pad, knowing we had done all we could, we headed out to finish the jug project in the barn.  (a jug is a small pen used for separating the ewe and newborns from the rest of the flock.  This allows the family to bond, and protects the babies from the larger animals.)
Imagine my surprise upon my return to find the tiny lamb standing and looking over the top of the box.  MAAA!  …and he was hungry! 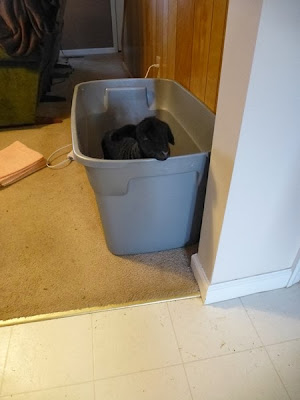 Feeding him was going to prove to be a challenge.  His little hooves had indeed hardened, but the kitchen floor was slippery and he hadn’t quite mastered the whole standing, walking thing.  He ended up spread eagle on the floor, looking very much like a large, very ungainly, black spider.  He didn’t understand that the nipple on the bottle was the source of nourishment, either.  He kept bunting my arm, my hand and gnawing on my sleeve.  Mother sheep guide their lambs to the teats by gently nudging them(sometimes not so) toward the udder.  In my case, I simply held his head still and forced the nipple between his lips.  As the warm milk slid down his gullet, he would get all excited and detach…and we would have to start all over again. Finally, I felt confident he had received enough and I tucked him back in his box.

He dozed quietly and all was well.

Well, I wanted him to recover.  And, it appeared he had.  Hunger was again the focus of his little world.  (and by default, mine, too) We did the whole bottle routine again.

When the cat came in the house, she immediately checked out the box and its inhabitant.  She was not amused.  It became apparent that she did not approve of our houseguest.  She paced and twitched her tail; she vocalized her dislike and wouldn’t even sit on the couch.

As the Boss settled in to watch a show on television, hunger overcame our houseguest again.  MAAAA! The Boss rolled his eyes at me.  It seemed no one in the house was too thrilled with my new project. (quite honestly, the appeal was wearing thin for me as well)

I fed the little guy again.  As I sat on the floor with him cradled in one arm, trying to get him to eat the bottle, Tess (the cat) sat beside me.  I thought she was being lovey and sweet until she started trying to catch the lamb’s tail as it waggled back and forth (lambs wag their little tails as they drink, it has nothing to do with cuteness, it has more to do with their digestion) Then, she grabbed his tail and bit it!  She was getting more and more irritated. She became disinterested and wandered off in search of entertainment elsewhere.

I set the lamb on the floor again to observe him.  Bodily functions were now my concern.  The only way to tell if he was getting enough fluid was to observe him peeing. (I suppose I should be proper and say voiding…)  And then pee he did! …ALL over the kitchen floor.  It was like one of the Great Lakes.  Well, there was no question that he was hydrated. I cleaned up the mess and put the lamb back in his box, hoping for a short respite.

No sooner had I settled into the chair than….MAAAA! The look the Boss gave me was very much like the look on Tess’ face as she continued to pace around the house, twitching and glaring. The atmosphere was just a little chilly as little lamb continued to complain.

We did the whole feeding deal again.  He could only handle about two ounces at a time and I ended up wearing a portion of that.

Little lamb was banished to the office with the door shut. Tess settled in on the couch, the Boss returned to his show. Peace reigned momentarily.

A muffled maaa echoed down the hallway. Again he was fed.  This time, he finally passed the meconium that had been in his intestine prior to birth.  This meant his digestive system was working. That was great! It also meant that there was lamb poop on the office floor. Oh, yuck…not so great.  Well, it is a farmhouse! (and it could be cleaned fairly easily)

Another round of barn checks and it was time to head to bed.  No sooner had our heads hit the pillows than….thump…thump…MAAAAA!  I thought maybe I could ignore it.  Maybe the Boss didn’t hear it.  But, then his whisper came through the darkness. “Do you hear that thump?  What is it?”  I knew, but I really didn’t want to deal with it. (I was SO sleepy) The little lamb was standing in his box, looking around for food.  Still somewhat wobbly, he would totter and bump the side of the box.  Since the box was directly on the hard floor, the thump vibrated into our bedroom next door.  A rug under the box solved that.  Another bottle solved the food issue.

All too soon it was time for another check of the barn. But, not before I heard….maaa…Maaaa….MAAAA! through the darkness.  Geez!  How does a mother sheep deal with this? Again I sat on the floor, feeding the little creature.  He was certainly perking up, that was a good thing.  But, now I had lamb poop on my pajamas and lamb milk in my hair and on my shirt. (yep, I am that classy!)  The ewes have my unconditional admiration. I cleaned up, checked the barn and collapsed into the recliner.

When daylight came (about two minutes later) we resolved to get the lamb out of the house.  Since he is so small and has no siblings to keep him warm and his mother cannot care for him, he would become a patient in my make-shift hospital pen in the shop, outfitted with a heatlamp and plenty of wood shavings.  My little hospital pen is a vintage wooden playpen I found on Ebay and the Boss modified for me.  It was my first Ebay purchase ever and I still think it’s the best 15 dollars I ever spent! (a special thanks to Blondie for helping me set it up)

With the lamb in the shop, I could clean the floor (again), wash the towels that had been in the box and allow life to get back to the usual state of somewhat normal-ness.  Until I walked out the door…

Yep, he’s looking for a meal…and he can be heard OUTSIDE the shop.  (well, at least he’s not in the house creating mayhem)

...so I’m off to make another lamb bottle. He'll need to eat about every four hours for about a week, then he'll begin to get bigger amounts of milk less frequently.

But, it looks like this little guy is gonna make it…Hooray!