Gus’ incredible cute-ness has a lot of folks gushing over him.

It is imagined that he sleeps in the house and that he is spoiled beyond measure. It has been suggested that he visit the Market…that he have play-dates with other doggies…and that I indulge myself in lots of canine kisses. 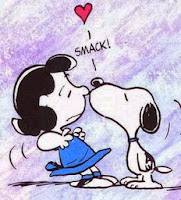 Unfortunately, I have to burst everyone’s bubble.  I get to be the “mean mom”…tough old farmer-woman when I say…

NO…Gus is a guardian dog.  He works for a living.
See, doesn’t that sound mean? Gus doesn’t get to go on play dates or sleep in a soft and comfy bed in the house and there is no way he’s ever going to the Market… While his every need will be met…he will be loved, appreciated and always treated well,

you must understand a guardian animal is different than a pet. 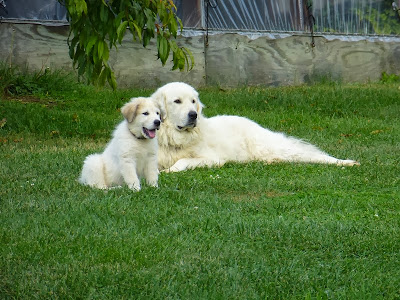 Over time, Gus will come to know his family, his farm and his animals quite well.  It is his natural instinct to protect those who belong to him…and ONLY those who belong to him.  Our cats (once they overcome their terror of the chubby nuisance that tries to get them to play all the time) will be watched over with a canine benevolence.  Any neighborhood cats will be chased off the property in a flash. 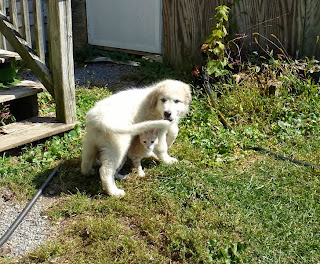 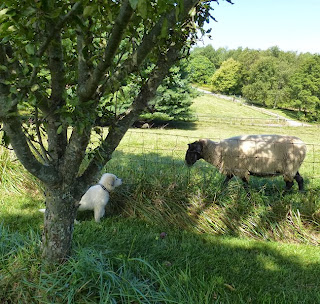 He is fascinated by the chickens, but they pay absolutely no attention to him.  After one encounter with the electric fence, he doesn’t even try to “visit” the chickens anymore.

He will bond with Ellie Mae, who has taken on the role of mentor (albeit rather unwillingly). They will work in tandem to guard the sheep and alert us to threats to the chickens and quite possibly (hopefully) apprise us of invaders in the gardens. They'll catch squirrels, rats and groundhogs.  All other canines, be they neighborhood dogs or coyotes, will be summarily dispatched from the premises.  That is the role of a guardian dog. That also explains why Gus can’t play with other dogs…if he accepts one unknown canine as a “friend” he may someday accept coyotes as well. 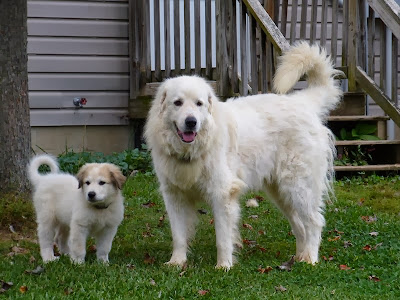 The Great Pyrenees are a fairly massive breed. If his current rate of weight gain is any indication, he will be enormous!  He gained over 11 pounds in just three weeks.  He eats anything he’s given…and a number of things that I would really rather he didn’t. 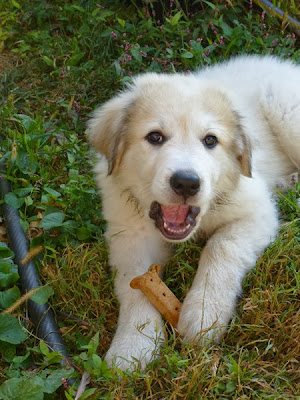 I know it will cause dismay to those dog lovers out there when I unequivocally state that Gus will never sleep in the house. (sorry 'bout that)  Presently, he does sleep in the barn, in what one of our shepherd-friends calls “the lion cage”.  It’s a fairly large wire pen that the Boss built years ago to haul Blondie’s show lambs around. It makes a nice puppy kennel.  (And, really, I have no idea why it’s called “the lion cage”.) But, eventually, he will sleep outdoors.  The guardian dog patrols the farm at night, doing his/her heavy sleeping in the middle of the day.  Since all the other farm animals live outside, the dogs must be out there in order to protect them.  The Pyrs have a heavy, somewhat water-resistant coat and love cold weather.  The breed originated in the high mountains between Spain and France.  They are well-suited to braving the elements. 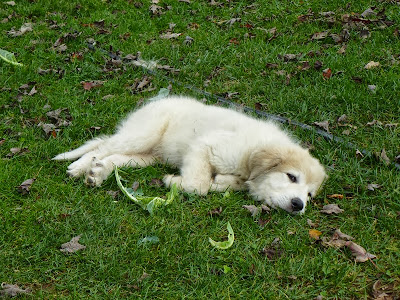 While Gus is growing, we will try to teach him some manners.  He needs to learn basic commands…you know,” sit, stay, and come”. This is for his safety and our peace of mind. Pyrs are notoriously stubborn, so this is a real challenge.  Ellie has already taught him the one basic thing that will assure his survival here on the hill …no one…NO ONE eats Ellie’s food or takes Ellie’s bones.  That is NO ONE!

He’s started to patrol and bark at those things he perceives to be unusual.  He’s also developed the rather annoying habit of barking when he’s corrected.  It’s like he’s talking back. While it’s kind of funny right now, I can assure you that’s not going to continue…I didn’t let my kids do it…I certainly won’t put up with back-talk from a dog! 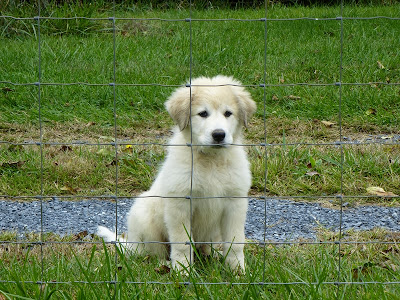 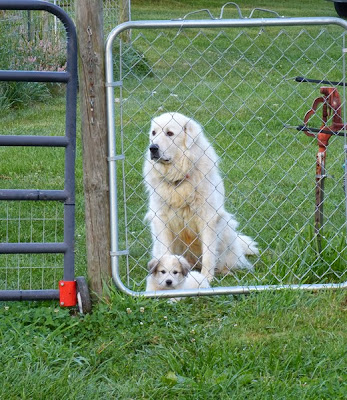 with a lot of play-time thrown in for good measure. 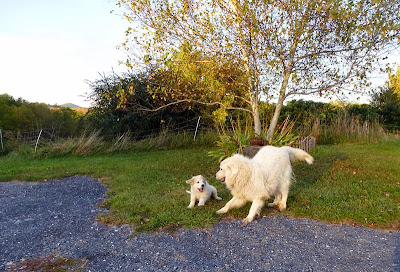 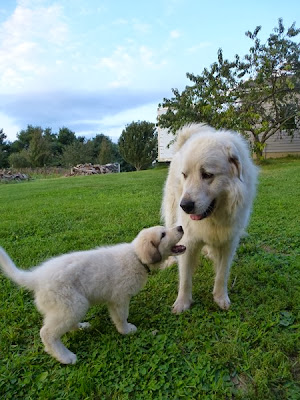 And while he’s a working animal, he’s also part of the “team” here on the hill. He’s going to be a real asset, so we will do our best to provide for his every need. 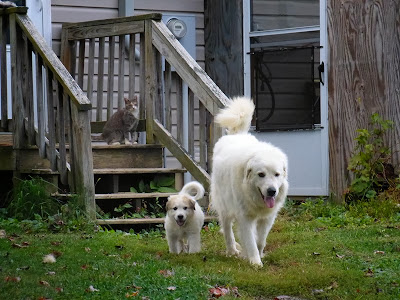 We’re real “hands-on” around here, so he’s probably a little more of a pet than a lot of sheep operations would allow.  (that’s just what works for us)  He’ll get plenty of ear and belly rubs and little treats from time to time. He’ll learn to follow us anywhere…more for the companionship than any real assistance. 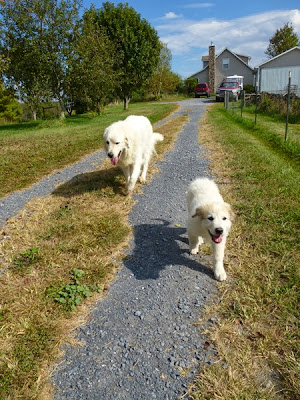 …and his somewhat goofy actions will provide us with an endless source of amusement. 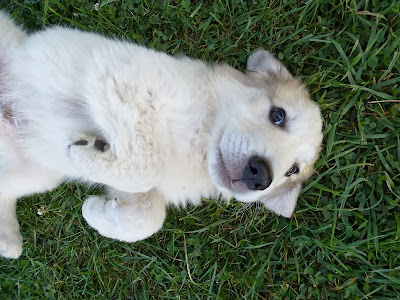 But, as for those canine kisses…

I’m in total agreement with Lucy vanPelt on that one!