I’m not into vigilante justice…not really.  But, there is a line that should not be crossed.

…well, there is a reason my kids say “don’t mess with Mama!”  I can assure you, if I say I will do something…I will do it.  Really…

A story? …oh yeah…there’s a story. 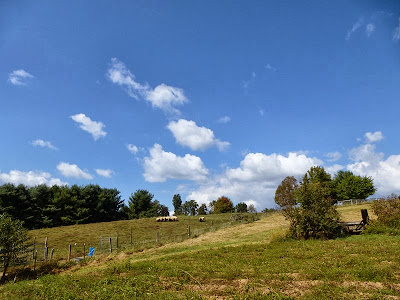 I was minding my own business, really.  I had a few minutes to kill before doing a phone interview, so I walked down to the hoophouse to turn on the irrigation system.  It was a beautiful, bright Autumn day…the kind of day that the newly planted crops would surely need some water. I was concerned about the newly planted Hoophouse #2, but the hydrant and irrigation control is in #1. (In a matter of moments, I would be glad for the fact that I haven't gotten #1 fully planted.) 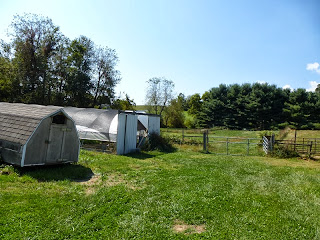 I walked in, put my hand on the hydrant…and then I saw him (or her). A big, fat groundhog…INSIDE the hoophouse. WHAT?  Again?  This is NOT funny!
Did you read this?
Our ongoing issues with groundhogs have me feeling a little like Bill Murray in Caddyshack. Here, read this.

We had just “fortified” this hoophouse, so the hateful creature must have wiggled over the front threshold that is so high I nearly fall over it when entering the hoophouse.
The groundhog and I eyed one another.
He was looking for an escape route.  I was looking for a weapon.  Because to my mind, there was only one way this encounter would end.  One of us wasn’t leaving the hoophouse the same way (or in the same condition) as we came in. …and I was standing in front of the door. I knew shutting the doors wouldn't work...there's a fairly large gap, even when they're closed. I couldn't continue to stand there...what could I use?

My choice of “weapons” was rather limited…a hoe, rakes, a couple of bags of humus…the hose…no real possibilities. I didn’t want to wound him and make him angry.  You do know groundhogs have big teeth and claws, right?

I needed reinforcements. I reached for my phone. Of course, my phone was sitting on the desk…in the house…where I left it when I ran out for “just a sec” to turn the water on in the hoophouse. Oh damn and blast! (yes, I really do talk that way…sorry)

Blasted creature…STOP eating my lettuce! You are NOT getting away from me!  I spoke aloud to the groundhog as he careened back and forth looking for an escape.  He grabbed the chicken wire side with his feet and teeth and tried to pull it down.  He galloped to the other side and tried to burrow out. Then he headed toward me.

Rrrrrr! (I was getting angry and I know I growled just a little)  I am gonna get you! You will not get out of here.  My only option was to detain the lettuce eating menace until I could get the Boss to come and dispatch him. I looked around for something to capture him.  The only thing I could find was the Boss’ big weed bucket. 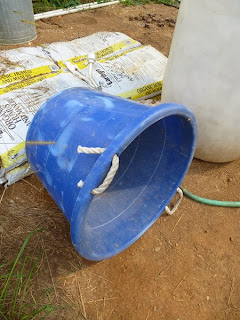 I headed toward the ‘hog with the bucket, hurrying through the freshly tilled earth, thankful I wasn't trampling seedlings.  He ran for the far corner.  As I got closer, he turned around and bared his teeth. (oh, now this was a development I hadn’t planned on!)  A couple of false starts and I finally got the bucket down over top of him. He actually bit the bucket repeatedly as I squished him inside.  Gosh, he was big! He was thrashing around inside the bucket, still looking for an escape. 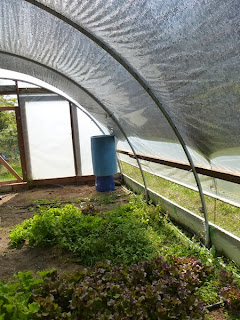 Now, how to keep him inside?  I grabbed one of the storage barrels and stacked it on top of the bucket.  That should hold ya ‘til I get back.  (I was only concerned with him tipping the bucket over, I never considered he could go under it) I quickly headed for the house.  I was trying NOT to run (I didn’t want to be all breathless and weird sounding for this interview) but I really needed to hurry.

Thankfully, I heard the Boss open the back door about the time I reached the barn. I couldn't see him, but I knew he was heading my direction.

I need you and your pistol!

Your Pistol…PISTOL! I need you to get your PISTOL!!

Oh, yeah…okay…why? I heard him open the door to get his firearm.

I had finally reached the back porch by that time so I quickly apprised him of the situation. “You trapped him with a bucket?  A bucket?! My weed bucket? That’s pretty good!”

Wait…take a picture…could you?  I held my camera toward him.

But, my interview…I only have a couple of minutes…

As we headed down to the hoophouse, he continued to laugh about how I had trapped the thing in a bucket.   He walks faster than I do so he got back to the hoophouse first.

No, there he is in the corner…shhhh!
In the short time it took me to get back to the house and get the Boss and his pistol (NOT a pencil) ---2, maybe 3, minutes tops---the groundhog had burrowed underneath the bucket and was again looking for his escape route.  ARGH!

There is a reason I needed the Boss and his pistol...he's the best marksman I know!

“I still can’t believe you trapped that thing with a bucket!  Good job, dear.  The girls were right…don’t mess with Mama!”

So, any other groundhogs out there…take this as a warning…a very serious warning…

Don’t Mess with Mama!    (especially when lettuce is involved)


A special thank-you to the Boss for taking care of the lettuce-eating menace!  Hopefully, that's our one and only groundhog story of 2013.

**and I got back in time to do my interview.  Maybe I should have told the interviewer that story…**