Well, Now That's NOT What I Had Planned 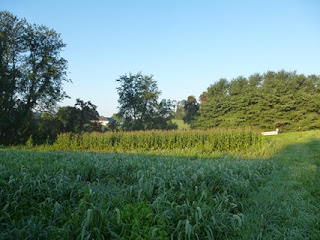 You just never know what will happen around here…never.

Every morning when we head out to feed the animals, we do a quick scan of the farm.  We do a cursory check of animal health, farm conditions and harvesting/weeding needs.

Occasionally, some previously unnoticed issue needs attention.  This may be some sort of animal health or housing issue or an immediate need for harvesting.  Generally, this check just confirms what we have already planned for the day.

The Boss got out back to service the broilers before I left the barnlot.  As I fed the lambs, I noticed him checking the corn patch.  The morning light was quite nice and I wishing for my camera.

Wait a minute…something looks odd.  Why is the Boss signaling like that? 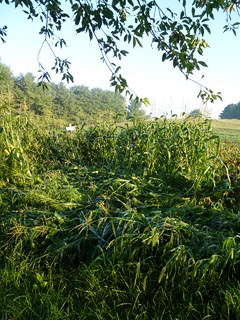 Oh my!  Oh my MY!  What happened to that end of the cornpatch?

It seems we had some visitors overnight.  Some very destructive, very hungry visitors.

Look at this mess!

It would appear that ‘coons got the corn and had a feast or a party last night.  They tore open and ate the corn that was just ready for Market…the beautiful, perfect ears.  They didn’t bother with the immature corn; they went for the good stuff. Not only did they eat the kernels off the cobs, they tore down the stalks and trashed the entire area. 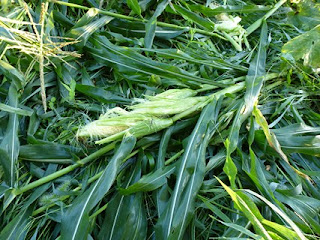 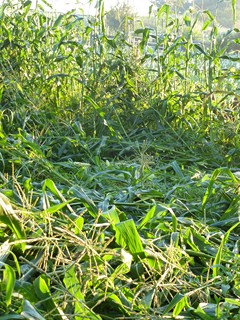 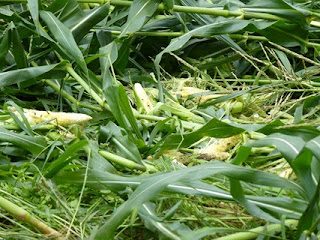 The Boss and I exchanged knowing looks.  Whatever we had planned for the day would have to be re-scheduled.  At some point, we would have to harvest what was left of the corn.  Otherwise, the corn party would last another night and we would be left with nothing. Fencing the area or setting out traps would be pointless. Since the critters knew about the bounty, nothing…nothing would keep them from returning to finish their feast.

We rearranged our other jobs in order to fit in this unexpected change of plans. In the afternoon, when things had finally dried out some, we set to work harvesting what was left.

There wasn’t a whole lot to harvest.  The ‘coon party took out a large portion.  A lot of the plants are small and the ears are not yet mature since I re-planted after the crow attack in the early part of the season .The enormous amounts of rain in July made it nearly impossible to work in the cornpatch, so the weeds got a little out of control, further reducing the success of the crop. 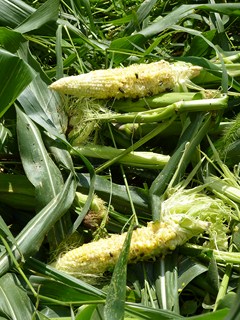 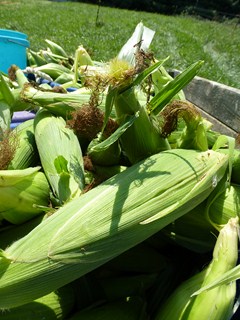 But, we will have corn for the Market!