If At First You Don't Succeed... 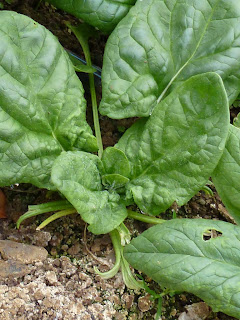 Every year there is one crop that leaves us tearing out our hair, cussing out loud, prayerfully rejoicing, or enjoying the enormous popularity.  Sometimes…just sometimes…it does all those things (and more) in a single season.

Spinach is one of those incredibly popular greens.  It seems EVERYONE loves spinach.  Sauteed, boiled, in salads and sides, it may surpass lettuce in its desirability.  There is no way we will ever grow enough to satisfy demand.  NO WAY.

Unless of course, we were to do this...

I hope you’ll watch those two videos.  No matter what you think of “conventional agriculture”, it is truly necessary.  The amounts of food needed to feed the world populace are bewildering and you must admire those folks who choose to work so hard for so little...for everyone else. When you watch a video like one of the above, it gives you just a little perspective as to how tiny we really are, and how much food must be produced.

Sorry, rant over….back to the spinach. 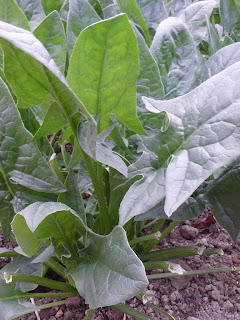 The spinach has been a challenge this year. ALL. YEAR.

First, there was the skirmish with the mice. I think I wrote about that. Yes, I did! You can read about it here.

Then, there has been a germination issue.  Same variety, same supplier, same starting soil…so how come?

Then, there was the heat, the Derecho, and more heat.

My surefire method of starting seeds in the greenhouse with all my “mouse protection paraphernalia” in place failed. It FAILED miserably! Somehow, the mouse ate ALL the bait out of the mousetraps WITHOUT tripping them, ignored the sounds of the “mouse zapper” (a device that makes a noise that is supposed to repel rodents), AND got underneath the protective screen across the flats.  He/she then proceeded to dig out and eat the seeds and seedlings out of all the flats. It was not a good start to the day.

Unfortunately, once a mouse digs in the soil and eats the seeds, I can’t just re-seed and go on.  I have tried numerous times with no success.  I don’t know why, but after a mouse attack I just have to dump out all the soil and start over again. It leaves me wondering if mouse saliva has some odd enzyme in it that prohibits germination. This is frustrating and costly and generally leaves me pitching some sort of fit in the greenhouse. The re-start also puts harvest time further away.

After much consideration, I thought perhaps direct seeding in the hoophouse might eliminate one step along the way and get us back in spinach production faster.  The Boss suggested putting diatomaceous earth over the seeds to deter the rodents that we KNOW are in the hoophouses. (the sides are rolled up on the hoophouses in the summer so all sorts of critters get inside) The diatomaceous earth is an organic substance that we generally use to keep insects out of the crops.  You can read about it here. 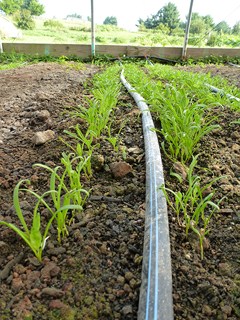 Lo and behold, the spinach came up beautifully!  We had great germination and fairly rapid growth.  Woohoo! Maybe I am onto
something.

So, we decided that we would plant more, seeding directly and thus eliminating a step that was costing us time and money and making me frustrated.


…and you know what happened.

Something in the hoophouse ate the seeds. Long stretches of seeds were hollowed out and thrown out of my carefully seeded rows.


I sighed and re-seeded. 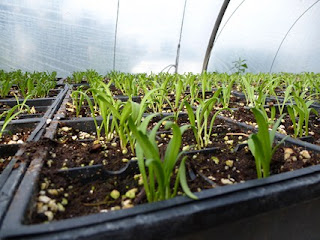 Then, I went to the other greenhouse (the one with fewer mouse problems) and seeded in a bunch of flats.

Presently, there is spinach germinating in both greenhouses, growing in hoophouse #2, and some more is ready to go in the ground in hoophouse #1.