It’s gonna be a long, hot summer, we should be together
With your feet up on the dashboard now…
Singing along with the radio, it’s such a beautiful sound...
-keith urban

As the Boss escorted me from Urgent Care  Thursday evening, I couldn’t help but think THIS was NOT what Keith Urban had in mind when he recorded "Long, Hot Summer".   The song had been the last one I listened to on my MP3 as I harvested and processed vegetables, and it kept playing along in my head. The feet on the dashboard line was giving me the giggles all the way home.

Oh, but…I suppose I should start this story at the beginning!

It started out as an average Thursday here on the hill.  We were actually making a good deal of progress in regaining control over the chaos that had seemed to take over the farm last week.  I was so encouraged and planning to “blog it all” later.

There has been no break in the heat and humidity, but we were starting to make some real headway in the “to-do” list.  When we worked the sheep and turned Waylon in with the ewes, I knew we were making progress.  Of course, completion of that project was also evident by a glance at my clothing.  I had little black sheep hairs on my shirt, grass-stained knees and sheep wormer on my shorts.  No problem…we work at home!

The next project of the day entailed picking squash for me and digging potatoes for the Boss.  With all the rain of late, we both got pretty (make that VERY) dirty.  Again…not a problem.

I have been trying to get all the seedlings for fall started, and only had a few more flats to fill.  So, off to the greenhouse.  Of course, heat and humidity again mixed with potting soil this time and I was fairly filthy when I finished. But…no prob…

Then it was time for chores.  I think I managed to stay relatively clean this time, but over all I was not a tidy sight as I went in the house to finish supper preparations.

The house smelled amazingly good.  I was trying a new lamb recipe in the crockpot and it seemed to have real potential. I put on a pot of rice and turned my attention to another new recipe a customer recommended.  I really don’t know what happened next.

Somehow, the newly sharpened butcher knife in my hand, or maybe on the counter, was suddenly falling, falling….slowly…toward the floor…no, toward…onto/ into my foot.  Ow! OW! OWOWOW!

The Boss called out “are you okay?” from the office.  My outbursts are not uncommon, but generally uneventful.

Blood was dripping down my foot onto the floor.  No, I am definitely not okay.  He was instantly in the kitchen.  I had no idea he could move so fast.

Doesn’t look good! That was his instant assessment. Great…

It can’t be that bad…

I looked down again. The wound was fairly large and bleeding profusely.  It certainly wasn’t good.  Okay, direct pressure, elevate it.  I did remember something from that first aid class about a hundred years ago. 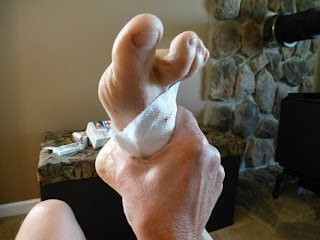 While the Boss rummaged around for some butterfly bandages, my thoughts ranged from the pragmatic…well, we can fix this…we’ve vetted sheep and cows with great success.

….to the annoyed…man, supper is looking so good, and this is going to ruin it! (and I am really hungry!)

…to the amused…this will make a funny blog entry. (which explains my taking my camera along while forgetting my wallet)

…to the worried…hmmm, it’s been AGES since I had a tetanus shot. (and I have serious issues with shots)

…to the more than a little concerned…HOW am I gonna work tomorrow?...and if I go to the doc, it is going to cost a fortune! 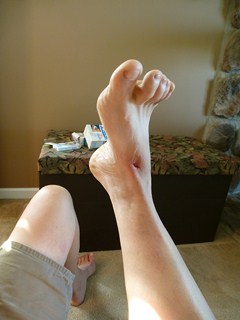 Man, that IS a big hole. 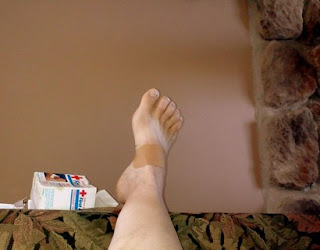 We got this thing!  I’ll just talk the Boss through the rest of supper prep…..then, I stood up.

This isn’t so bad. It only hurts a little.

Oh, wait…I’m leaving a trail of blood across the floor.

It was then the Boss pulled rank and decided to haul me off to somewhere because he KNEW I needed stitches AND a tetanus shot.  …and quit your arguing. But, but….oh my…look at my clothes! (my knees…my very dirty feet…) Oh, and dear...you're not so clean yourself! 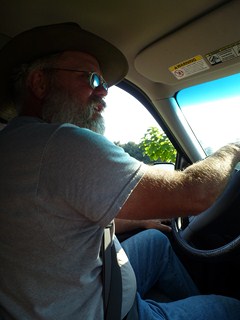 A consult with EMTdaughter didn’t help much.  “You need to update your tetanus, and you probably need stitches. I’m just trained to treat and transport…” I think she kind of chuckled.

So, off to urgent care.  They took us right away and the nurse was keeping up a steady stream of conversation.  Suddenly, the recall of another Thursday night, in another emergency room rolled over me.  It wasn’t the blood or the situation, the paint color in the exam room was exactly the same.  I started to feel more than a little odd.  “Hey, are you okay?  I think you need to lie back. Lots of people have a problem with blood…”  It wasn’t worth trying to explain the flashback to that awful night in 2010.

The doctor came in to assess the situation.  “So, stabbed yourself with a knife, huh? “ He didn’t even have to look at the chart.  “Let’s check this out.” I thought I would faint when he wanted to move my toes. 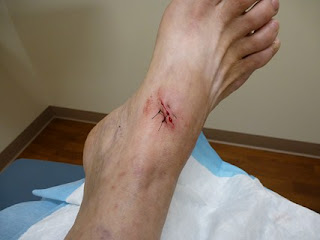 Apparently, I didn’t do any serious damage to the ligaments. Oh yikes, I hadn’t even thought of THAT!  The four little stitches only took a couple minutes.  The tetanus shot made me feel weird and woozy, but then I was rolling back out the door again.

Now, I just feel stupid…for not wearing my shoes, for not paying attention, for not having quicker reflexes,  for not cleaning up BEFORE supper, for being a “wus” about needles,  for needing the Boss to take over everything I was planning on doing last night, for whining and limping about because of four little stitches…and on and on.

Today’s harvest was difficult because walking hurts.  I drove the lawnmower back and forth, but harvesting/processing/packing requires SO much walking, kneeling, squatting and all those activities affect one’s feet. Who knew?

Three steps toward the door would have put me further from the counter…and I wouldn’t have hit my foot with the knife! and I wouldn't be in this predicament.

Three steps…and urgent care wouldn’t have to “see me no more."

Three steps?…I won’t be taking them for granted anymore!

So… Won't you (somebody) give me three steps?

At this point…I’d settle for even one that didn't hurt!