The Week of the Broiler 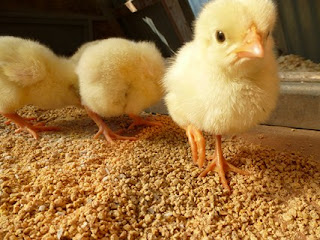 From March to October, the number of farm inhabitants is at its highest.  Once a month, we get a batch of broiler chicks.  While the number of broilers we process is miniscule in comparison to other producers, the principle is very similar.

This week we “processed” broilers, re-located broilers and picked up broilers.  Of course, we also fed the broilers.  If this breed of chicken has any talent whatsoever, it would be eating…and eating…and EATING! The daily move of the pasture pen is also part of our routine.

We began the week by processing the eight week-old birds that were on pasture out back.  We have finally hit our groove with this activity and can get everything done and cleaned up in a relatively short period of time. The Boss and I make a pretty good team.

The birds were frozen and will be available at the Market this week. I even remembered to stock the Market freezer! 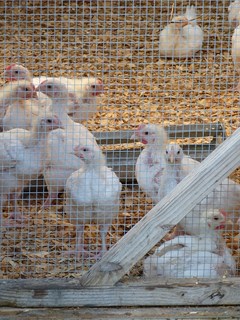 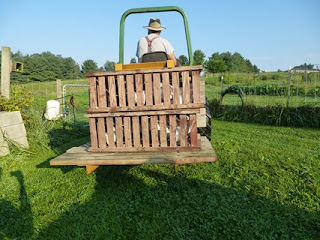 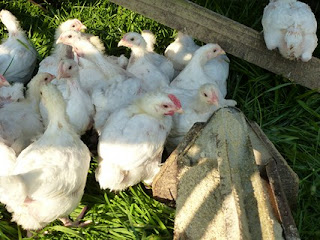 Then, the mid-sized birds had to move from the brooder to the pasture.  This involved catching them, crating them and hauling them out back.  Can’t say that this is the most enjoyable job on the farm, what with all the screaming chicks and flying dust. But it is so funny to put them in the field pen…they can’t seem to figure out WHAT just happened to them.  They adjust quickly and begin eating once more.

The brooder is cleaned up and re-furbished before the next batch of “babies” arrives. The day-old chicks arrive in a special box at the Post Office. 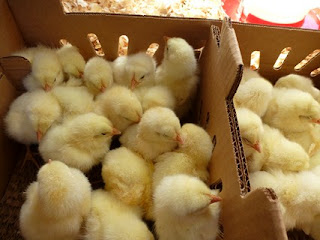 Usually they make such a ruckus that the “post office lady” wouldn’t have to say anything when she calls, she could just hold the phone out and the peep-peeping would alert me to the situation.  Since the post office is less than a mile away, they could probably open the door and I would hear the noise and head out to pick up our new charges.

They look so warm and fuzzy there in the box. 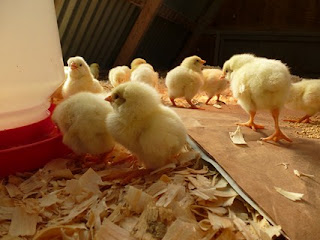 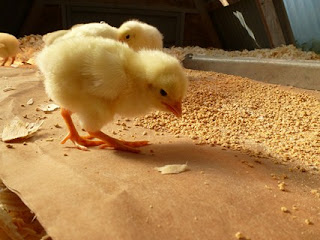 Their cuteness doesn’t last very long.  Within a few days, they are beginning to feather out.

They will be ready to go out to the field in a couple weeks when the whole cycle begins again. Or perhaps I should say...continues...until October when we will be done with the broiler project for the year and turn our attention to raising out a new batch of layer chicks.