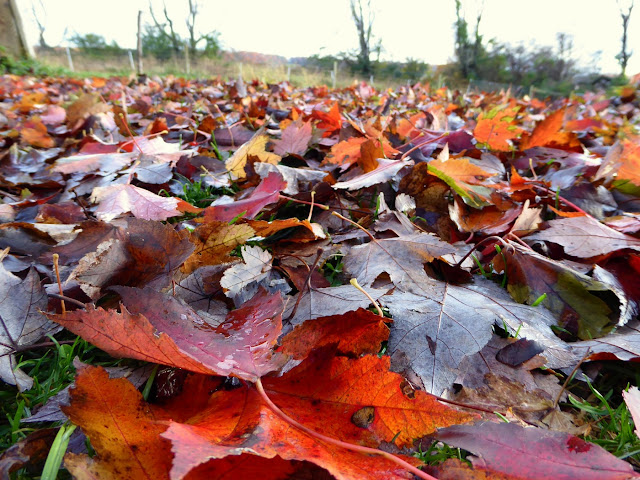 So, here we are. It’s November first. That’s hard to believe. I don’t know where the time has gone.

This week, like so many before it, simply flew by.

And, while it probably wasn’t the most productive week, we did manage to get some stuff accomplished. More importantly, I did not share my germs with the Boss and I’m back to being as normal as I ever can be. (thanks to those of you who voiced your concern)

November is a month of lasts…last batch of broilers, last load of lambs, and the final Market of the season.  Everything has slowed way down…almost to a crawl. And, honestly, it’s more than a little challenging to keep motivated for the Market as the season winds down. But, during the last weeks of the Market we generally make a fair amount of sales as our customer-friends stock up for winter. For the most part, our scintillating schedule doesn’t make for interesting copy.

I spent Monday afternoon with one of “my guys”, so that his mama could say good-bye to a dear friend. And, can I just note that my list of accomplishments now includes successfully navigating my son-in-law’s new car down the interstate with the crazy big rigs despite my grandson’s most aggrieved howling in the backseat? That one was simply a testament to the power of prayer. 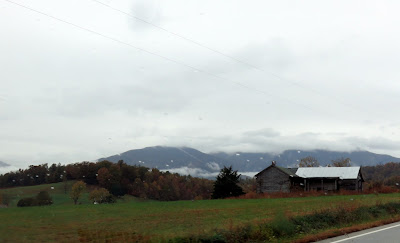 The rains came in on Tuesday, so the Boss and I headed over the mountain for his birthday lunch. I’m not sure how this became a tradition, but according to Facebook, we took the exact same trip six years ago. (nothing like being predictable…)

And, there were countless pumpkins in the same fields. I’m pretty sure I’m not the only one who ever wondered about ALL those pumpkins…read this. But, now I’m wondering about all those pumpkins left behind. You know, the broken ones, funky ones, little, itty, bitty ones. What happens to those? I guess I need to do some further investigation.

Wednesday dawned far too wet and far too dark to do anything outside. I suppose I could have worked with my headlamp on in the hoophouse, but the light is growing dim and the mess on my desk was screaming for attention. I conquered the filing, got all the receipts recorded and started in on all the outgoing expenses.

In the midst of it all, Blondie called to ask me to sit with her little man while she kept an appointment. By that point, I was ready for a break (and the data entry work could wait).   So, I ended up spending time with both our little guys in the same week. It’s so amazing to watch them change and grow.

However, I got very little actual farm-related work done until Thursday. Not complaining by any stretch…

But, by the time Thursday rolls around, it’s time to focus on the Market again. This week there was a lot of stuff to harvest. And, that’s a good thing.

Speaking of harvest, the corn and soybeans around Mbrk are just about finished. The big trucks loaded down with grain have been seen on a daily basis headed into town.  The other night, I was privy to a late night harvest on the farm across the way. I’ve never seen that before. It looked almost like a dance, the lights of the harvesters twinkling across the valley as they made their rounds in the field and the low rumble of the equipment created a deep melody line. It was too dark to capture it on video, so you will have to take my word for it. With rain predicted and muzzleloader season beginning, I guess night was the only time that would work for the harvest team. I can’t imagine how hard it must be to run big equipment in the dark, but I’m glad that someone is willing to do it.

Harvest here on the hill is not a big one-time event (like grain or hay) but an ongoing process and unless you know what to look for, you wouldn’t even notice.

This week, the only noticeable change around here had absolutely nothing to do with harvest. We finally pulled the shadecloth off hoophouse #1, so it’s much brighter inside. The shorter height and rounded shape of this house actually retains more heat than the high, pointed gable roof of #2, so we were trying to keep from cooking the plants inside.  Since it’s a pretty sure bet that we have seen the last of the 80 degree days, it’s time to think ahead toward actually retaining some heat during the cold winter months, as well as getting the last of the greens and scallions planted.

There is nothing quite as wonderful as a freshly picked salad during the long, cold days of winter.

I guess other folks think the same thing, because at the Market I had at least a half dozen folks ask me if we were going to do our usual “winter thing” this year. We certainly hope so! (although, we really need a better name) I would like to sound more absolute than “I hope so”. However, we are always at the mercy of the weather.  Most winters we have some variety to offer. But, last winter was so cold that we rarely had anything green to offer (although we did have other stuff). So, in all honesty, we can only offer our hopes for a mild winter and lots of leafy harvest. Even my vague hopes were met with enthusiasm. It’s so nice to know that our Winter Customers are such an understanding and supportive bunch!

During relatively slow time of the past two Novembers, I have taken part in the Blogging for Agriculture challenge, writing something Ag related for each and every day during the month.  If you’re interested, you can read ALL those blog entries by following the links below.

This opportunity didn’t avail itself this year, and I’m not so sure I could come up with something original to say for 30 days straight again. Do you have any idea how hard that is? But, after a very long dry spell, my typing fingers were getting itchy.

There’s a big writing challenge for November where the participants attempt to write a 50,000 word novel in just 30 days. Novels aren’t really my thing, but I did find a non-fiction writing challenge. I like the idea of a writing challenge because it gives me some sort of focus. Now, I guess it’s time to put up or shut up and get to work on that book that a number of people have told me I really ought to write. The one that I’ve been thinking about for years. I have no idea if I can do it. And, honestly, it’s more than a little daunting to try. But, I do actually have an outline and a few pages done. And, by telling you about it, I will feel like someone will hold me accountable.

Perhaps, in working on this project, I can recapture my creative abilities to write interesting copy.

Because, honestly, the whole "Sunday Walkabout" thing has gotten more than a mundane and in some cases, downright boring. (but, it's all I've got right now and I know that there are some actual, loyal readers---thanks, guys!)  I do have a bunch of ideas that don’t fit in with my outline, so maybe, just maybe I can produce some  blog posts that don’t include the phrase “not much happened this week” or “the same old, same old”! That would certainly be a step in the right direction.


Back to the reality of the farm…

Despite the time change, it was still dark as pitch outside at choretime. But, the animals are awaiting their breakfast and there are other farm chores to do. So, we’re off to start another day, despite the rain that has settled in for the foreseeable future.

Thanks for stopping by! I hope you’ll visit us again real soon.