Here’s a quick look at the week that just flew by. That extra hour that we supposedly gained last week has done nothing but confuse all the residents on the hill.

The animals seem to think we are late. Very Late. All. The. Time. And, as for the humans…we’re dropping over with sleepiness right after supper and waking up when it is far too early for anyone to begin the day. Here’s hoping that this week grants us some much-needed adjustment. And, that’s the end of my time-change whining. (until Spring)

After some hemming and hawing, scheduling and re-scheduling, we decided to go ahead with the original plan and process the last batch of broilers. When the days get shorter and darker, the chickens don’t eat as much. Since they’re day-light sensitive, they get sleepy…just like we do. Sleepy chickens that don’t eat as much don’t grow as fast. It is possible to put light on the birds, simulating daylight and causing them to eat more. This is how the industry regulates growth in the broiler houses. However, our field pen is not really designed for this and the little solar pathway lights that we have used in the past are not terribly reliable and its effectiveness is questionable as well. When we considered the added expense of feeding them for another week AND the possibility that November weather is not always conducive to outdoor work, we decided not to delay the inevitable.


In case you were wondering, we don’t have any broilers here on the hill (except in the freezers) from mid-November until the end of February when the first batch of chicks arrive for the new season. Winter weather precludes use of the pasture pen and our outdoor processing shed, so we take a break from broiler production for a while.

With the broiler pen empty, the Boss moved it to its winter resting place next to the hoophouse. It’s in need of a few repairs and he is starting to make noises like he’s going to rebuild the whole thing. One way or another, it’s out of action for a while. (and leads to my next story)

With the pen out of the way, we could move the lambs into the broiler paddock to take advantage of the lush grass until the last few head off to the processor next week. At that point, we will do a major re-arrangement of sheep and lambs. The ram will move to his bachelor pad-dock and all the ewes and ewe lambs will head out front for a while. At the end of the year (or the first big snowfall) the ewes will head to the winter paddock near the barn until lambing season. But, I’m getting way ahead of myself!

With the lambs in a new place, it became evident why you must ALWAYS pay full attention to yourself, the animals and your surroundings. Which I totally failed to do. There is one ewe lamb that is particularly friendly and follows me looking for treats. Not only does this make me feel a little like L’il Bo Peep, she manages to get herself where she really doesn’t belong.


Hungry lambs and leafy garden crops are not a good mix. Thankfully, she was rounded up fairly easily…with the feed bucket (and a little help from the Boss). 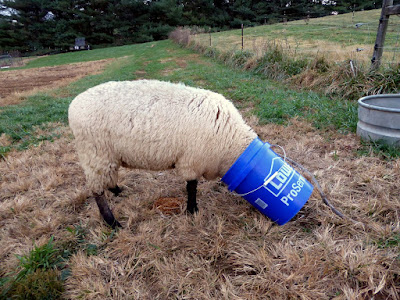 In other garden news, the hens are set to move into the potato garden come the first of the week. Here they will peck and scratch for a while in hopes of cutting down on weed seeds and bugs for the early crops of 2016.

Once the Market ends and we are finished harvesting the lower garden, they will move there for the majority of the winter. This will give them green matter for their diet and theoretically cut down on potential weeds and pests for the upcoming season.

But currently, they are enjoying a feast of great abundance as they eat all the weeds from hoophouse #2. The chickweed takes over that space the way kudzu has enveloped over parts of the South. And, unfortunately, there is no real solution except to pull it (and the crop) out and start over again. The worst part is when the chickweed is pulled it drops tiny little seeds everywhere and they seem to be able to germinate in any possible type of growing condition. We spend so many hours in combatting weeds that we could spend doing other more profitable things. Honestly, I totally understand the use of herbicides in the industry. (but, don’t worry…we don’t use any here on the hill) Perhaps we could convince our customers to eat copious amounts of chickweed…? But, then, the hens would probably revolt. So, I guess we’ll just pull weeds…again and again.


November is a notoriously slow time in the garden, but look at the garlic!

Look at the kale! 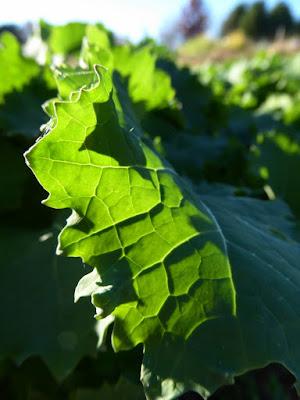 After the Boss cleared out the hoophouse, I spent some time planting greens that we hope to offer for sale during the winter.

With just a few Market days left until the 2015 season goes into the history books, everyone was hoping for a nice day on Saturday. Particularly since Friday’s weather set records for warmth throughout the area.

It rained and rained and rained. I felt so sorry for the veterans (and the spectators) as the Veterans’ Day parade rolled through the streets of Staunton. The words rain and parade really don’t belong in the same sentence. Market customers were trying to juggle their purchases and umbrellas during the worst of the deluge. The unfortunate ones without umbrellas were dashing from vendor to vendor, hoping to get under cover as they made their purchases. Despite the fairly miserable weather, most everyone found some way to be cheerful and it turned out to be a great day for sales.

I would like to put in a request for nice weather for the next two Saturdays. Please.

And, that was the week on the hill.

Not too exciting this time of year, I must admit. But, the first seed catalogs for 2016 arrived this week, so we will soon turn our attention to the next growing season. But, there are countless other jobs that need some sort of attention first. Fall maintenance and preparation jobs can actually be a little overwhelming as winter weather predictions start. For right now, I’m not listening to anyone who says the “s” word. Let’s get through the end of the Market and Thanksgiving and then we can talk about winter.


Want to virtually visit the Market on a rainy day?  Here is the link to the Boss’ photos.