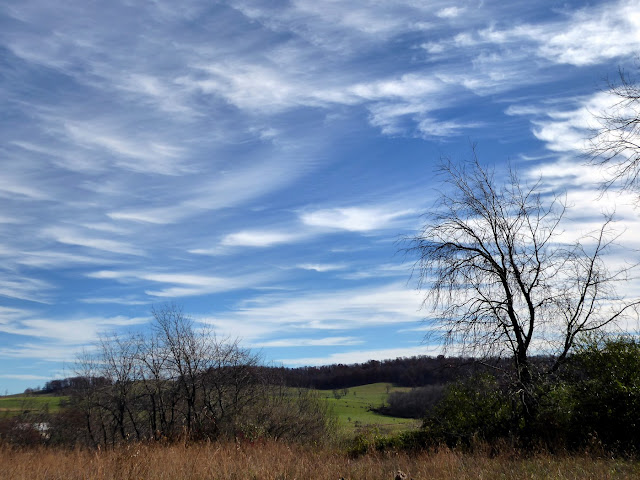 With very little revision, that could serve as this week’s blog post.  …’cause…well, nothin’ much happened!

Mid-November is just an awkward time of year. It’s too late for planting for this year, too early for planning for next and we still have a couple of Markets to focus on before we get into “winter mode”. It’s an exercise in perseverance, which doesn’t make for much excitement or interesting copy.

It’s a time for cleaning up and winterizing which don’t make for pretty pictures, either. But, we are making progress. Since we won’t be doing any front porch sittin’ until Spring, the rocking chairs were upside down so we won’t have to listen to them creaking as the winter winds howl and the houseplants returned to the spare room. The canned goods are all tucked away on the shelves and the canning paraphernalia has returned to the freshly cleaned and organized shed for another season.

Next up, the greenhouses… Because it will be time for next growing season before you know it!

November’s weather can be challenging, too. In the past week to ten days, we have had record-setting warmth, a couple of rain storms, a day where the temperature never reached 40* as a high, and then we spent two days under a wind advisory. This made it somewhat difficult to get any outdoor work done. But, all in all, I guess it’s better than last year. It was 16* at the Market at this point of 2014. And there was snow before Thanksgiving!

The wide variety of weather made for some pretty photos.

No, we won’t be complaining about this year’s winds and rain!

The Boss got the hens moved into the middle garden this week. Which, I might add, was no easy feat since the ground was still so soggy following the rain. Moving the henhouse from the middle garden to the lower garden in a couple of weeks may prove to be interesting, as it is currently sunk to its axle in mud. But, the move was successful and the hens are hard at work scratching around, feasting on weed seeds and insects. 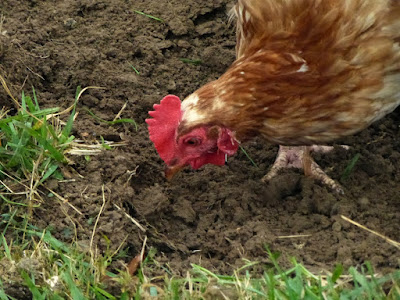 All was well until a cold front blew in, bringing with it some serious wind. Wind is nothing new on the hill, but when the gusts are measured at over 40 mph, we generally have some sorts of issues. And, this time was no exception. The wind caught one of the flaps that cover the henhouse windows and ripped it off its hinges. This caused all sorts of mayhem among the hens as they reacted like the chickens they are, squawking and flying around, and a couple of them escaped in the process. They managed to remain undetected in the garden for the better part of the afternoon. They were having a grand time, but we couldn’t have them eating the Market vegetables.


There is no easy way to get escapee hens back where they belong. Chickens don’t follow directions, and they don’t herd well, so the Boss ended up chasing them around the garden with his big fishing net. Which proved to be quite the experience.  (and kind of funny) This is only amusing to those who are not involved in the aggravating activity of chasing chickens. This time was made more aggravating because they could use the cover of the garden to out-maneuver the Boss. However, he did win out in the end. I am wondering if we couldn't market some sort of farmer fitness program...look at those moves! 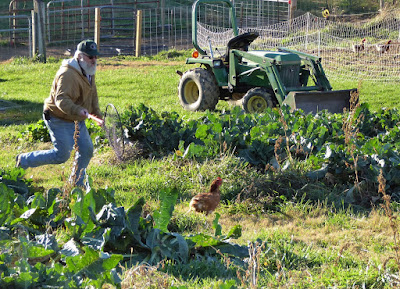 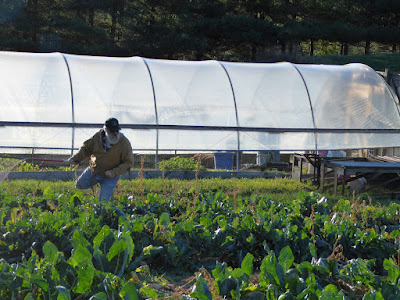 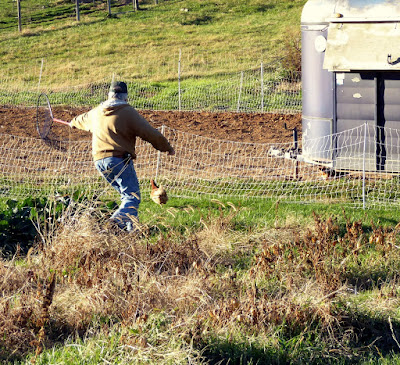 My own animal escapades didn’t work out so well, and I pulled something in my back when we were working lambs early in the week. Combined with all the bending and kneeling that harvest requires and the five-hour stint of standing at the Market,  I’ve been spending some quality time with the heating pad while ingesting the maximum dosage of “vitamin I” (you know, ibuprofen) Not much fun, but it did get me out of chasing chickens!

Thankfully the winds have finally died down somewhat. Wind always create challenges here on the hill. And, it pretty much blows ALL the time. Over the years, we’ve lost shingles, had the side blow out on one hoophouse, and wonder if that flickering power will actually be an outage (not this time) Generally our somewhat temperamental internet connection finally just gives up all together.  This is frustrating because we lose phone service as well, making us feel more than a little isolated.  After two days of wind and its challenges, everybody gets a little testy. I’ve been working on an entire post about the wind and the Market…so be on the lookout for that soon.

I am quite happy to report that despite the challenges brought on by the wind and the cold, the next to last Market was a good one.

The upcoming week is going to be one of lasts. The last batch of lambs will be hauled on Tuesday. And, Saturday will be the last Market of 2015. I am definitely looking forward to those two events.

See?  I told you that not much happened this week!

Here’s a quick virtual tour of the Market, courtesy of the Boss.