That about sums up our week here on the hill.

But, what is STC? you may ask.

Subject to CHANGE.  Everything is SUBJECT TO CHANGE.

While this is always true to some extent…some weeks it seems that any planning was a total waste of time when we look back at the week.

This was one of those weeks.

I am not complaining. No, not really.  We got a lot done.  Just not exactly what I had in mind. We’ll just have to change the date on the top of the “to-do” list.

As you have probably come to expect…weather played a big part in all our changed plans. A very big part. And, I hesitate to even mention all the rain.  There are folks not far from here that are praying (hard) for rain.  They’re even starting to use the “d” word in some places.  That definitely wouldn’t be here.  Heat has been a big factor, too.  The heat index was well over 100 degrees several days. But, I’m getting ahead of myself again.

When I closed last time, I mentioned going to pick up lamb from the processor’s.  That was job one for the week, since we were nearly sold out of a couple of items.  It was supposed to be blazing hot and rain was forecast for Monday (again) so hay hauling was put on hold and we set off on a little roadtrip.

We took a little different route this time and saw some new things. The corn and soybean crops here in the Valley look pretty impressive…in places.  You could definitely tell the areas that had been having a lot of rain.

Meanwhile, ”back at the ranch”, I was watching the sky (and the radar) hoping he would get back soon so we could get all the coolers out of the car and packed away before the heavens opened. We did…sort of. We just got a little wet. But, the important thing was we got everything in the freezers.
By the time it was all said and done, we had 1 ½ inches of rain. Seems those screaming weather alarms were right after all.

Needless to say, it was going to be too wet to get hay on Tuesday as well. The Boss headed out to clean the barn.  The barn really needed a good cleaning BEFORE we got the next load of hay, since we will have to use the space generally devoted to jug pens for hay storage for a while. As he scraped and hauled, we noticed a lot of wet spots in the floor.

The moisture was worrisome since wet hay will mold and moldy hay can cause health issues for the animals. And, hay is far too valuable (read…expensive) to waste!

If we put down some pallets and covered them with a tarp, the hay would be safe and dry.  But, pallets would require a trip to town…so, grabbing our work gloves, we set off to the feedstore to see if they had some old pallets we could have.

They did. The Boss worked on getting them in place while I headed to the garden to pick as much as I could before it rained again.

Another thunderstorm blew through.  This time, we only got about ½ inch. (if you're keeping track...we've had well over 2 inches of rain in just 5 days)

But, it came down fast and furious and caused a “water feature” in the middle of the barn. It’s a real good thing we got those pallets!

As the torrential rains rush off the barn roof, they are beginning to come under the wall.  Partly due to a design flaw (the barn sits in a little swale, downhill from the house) partly due to time and settling…and due in part to the fact that rats have made little tunnels along the outside wall…we now have a water problem inside the barn. Another unexpected project was in the offing.

Since it was still too wet to get hay, (we finally put the whole project off until next week) a dump run was in order.  And, while we were in town, we could investigate a possible solution to the water problem. We had discussed a number of ideas, although nothing easy and/or affordable readily presented itself. We came up empty at Lowe’s, but the Boss was on to a new idea and found what he was looking for online when we got home. The project doesn’t look quite as involved as he had thought AND it’s not going to break the bank.  However…it certainly wasn’t in my plan!

The wet weather continues to present a great growing environment for pests and parasites.  So, we worked the lambs again in hopes of avoiding any more cases of bottlejaw.  The heat also makes the stocktanks gross with all sorts of algae and provides a breeding ground for nasty bugs, so a good scrubbing was in order. Since many water treatments contain copper and other substances that can be harmful to sheep, we approach this one the old-fashioned way...with a scrubber and elbow grease


But,it looks like we have the issues under control and we certainly don’t have to worry about green pastures for grazing as we have had to in years past!

Despite the wet conditions, or perhaps because of them, the garden needed our attention.

The torrential rains beat down the tomatoes despite the trellising, so they needed re-tying.  Hopefully, we will actually have some ripe tomatoes for Market this week.  We had a lot of disappointed customers on Saturday who weren’t real happy that the tomatoes are just sitting there, not ripening. Can’t say that we’re real happy about that one ourselves!


Everything else in the garden is ripening at warp-speed and keeping up with the zucchini crop is a full-time job.

The high temperatures and torrential rains are making harvest a challenge and causing a fair amount of loss.

The Boss pulled out the spent broccoli crop, taking it to the hens.  He bush hogged the plants from the first squash, bean and cucumber plantings and tilled the beds all in anticipation of fall crops that we will be putting in later.

At some point during the week (I think it was Tuesday) I spent some time in the greenhouse starting seeds.  One greenhouse is completely full of seedlings and the second one is nearly halfway full. (the to-do list for the coming week is growing) By Friday, germination was evident!

And, speaking of germination…the potatoes are sprouting!

Neither one of us can remember ever seeing this happen quite so quickly.  But, that’s definitely a good thing. …as for getting the Spring potatoes harvested…didn’t happen.  Maybe this week…then, again…


This time we aren’t battling groundhogs or other varmints, it’s a tiny, fairly unobtrusive insect. Known as the Diamondback Moth, these creatures can wreak havoc on leafy greens, particularly anything in the brassica family. Much of the crop has been completely destroyed, so I will have to start seeding once again.

The Blue Moon had everyone talking…and while it wasn’t remotely blue and I’m pretty sure our daughter is glad it didn’t induce labor (we'll have to wait a bit longer for grandbaby#2 to arrive)…it was a sight to behold.  We won’t have another “blue moon” event until 2018, so the occurrence is quite rare, hence the expression “once in a blue moon”. 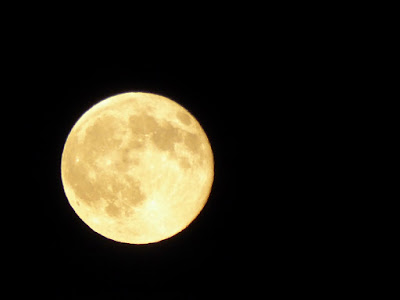 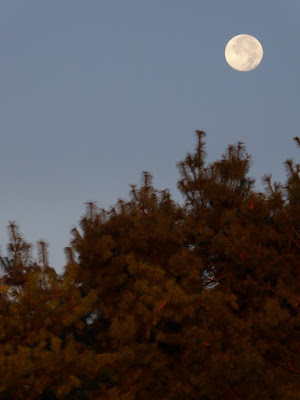 Saturday’s Market was crazy. It was the perfect combination of beautiful weather, entertainment at the market and LOTS and LOTS of customers, making for an excellent sales day. 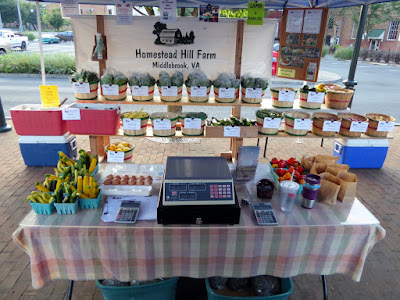 Today marks the beginning of Farmers’ Market Week. Both the Secretary of Agriculture and the governor have issued proclamations, emphasizing the role that Markets can play in healthy eating and vibrant communities.  I would like to hope that I could find the time to write something interesting about the thing that is so very important to us. However, it’s August, we’re running behind and I can’t promise anything.  Last year I did manage to write a number of posts.  The links are below, if you’re interested in further reading.  …and if you have any questions about farmers’ markets, let me know and I will try to address them. I really like to hear questions from the other side of the table!

That brings us to the end of another week on the hill.  Here’s hoping that we will be able to get something on the “to-do” list accomplished this week. But…then again, that’s STC.

There is one job that HAS to be done this week...but, I won't tell you about it right now.  Suffice it to say, one of the farm residents will be very happy...

Thanks for stopping by.  Come back and visit us again real soon!