It’s been a hot, busy week here on the hill and I am incredibly thankful that we generally take Sunday to be “a day of rest”. Because, honestly, I am beat. I’m pretty sure we will both benefit from a little down-time before the upcoming week that promises to be more of the same.

It’s mid-summer, perhaps the busiest time of the year on any farm, but around here it means that we’re busy harvesting the fruits of summer, preserving them for winter, planting fall crops and even looking ahead to next year.  But, I’m getting ahead of myself.

There were two full wagons waiting for us in the hay guy’s shed, so it really didn’t matter if the forecast for Monday was for HOT weather.  It looked like we were in for a stretch of dry weather, so haymaking was on his to-do list.

However, in order for the hay guy to load more hay, we needed to empty his haywagons first.  That was going to be Monday’s afternoon job, after I went to town and the Boss did a little bush-hogging for the neighbor.

My town trip was fairly uneventful, although Gus escaped on my way through the gate and I had a few moments of panic as he appeared to be setting off for the wild blue yonder. Thankfully he is NOT like our other Pyr, Jed, who must have been bitten by the wanderlust or perhaps had a little gypsy in his blood, because when he would get through the gate…he was off and running to parts unknown.  Once, the entire family (including a then-boyfriend) set off on a chase through the darkness, only to capture the aggravating creature in one of the town neighbor’s backyard.  I was not up for a dog-chasing adventure first thing on a Monday morning and I was grateful that he turned and headed for home without incident.  Until I grabbed his collar.  He does NOT like his collar grabbed, and he jumped straight up in the air, feet flailing wildly.  One of his enormous claws came down on my arm, bruising my bicep.  Then, it was a struggle to hold him AND Ellie while I closed the gate.  Holding onto 200+ pounds of jumping, drooling white fur and muscle while attempting to leave for town was not the way to start my Monday.  Thankfully, the day did improve.

After lunch, we headed over to pick up the first wagon.  The bales were big and tight and stacked high in the wagon.  It quickly became obvious that we weren’t going to get both wagons that afternoon. Hauling hay is hard physical work done in hot weather and it takes a toll. (and that bruise on my bicep really didn’t help anything) With that load of hay stacked, we figured we would go back the next morning for the other wagon.


But, the weather had other plans. Tuesday’s forecast was for rain. Rain and hay just do not mix, so the Boss decided we could start working on planting out the fall brassica crop. A little rain wouldn’t hurt us and the young transplants would actually benefit from the moisture. 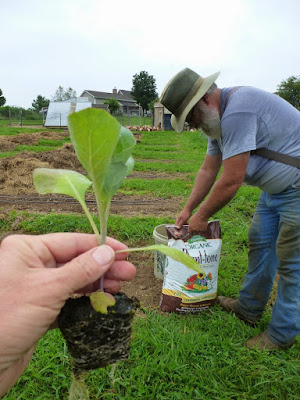 By lunchtime, we had over 600 broccoli, cabbage and cauliflower plants in the garden and had started getting them mulched.  We finished up mulching after lunch and headed to other jobs.  As I was in the middle of the cucumber patch…the heavens opened.  And, I do mean opened. The shower was brief, but I was completely soaked. Oh, well, it actually felt good and it worked to cool the cucumbers. 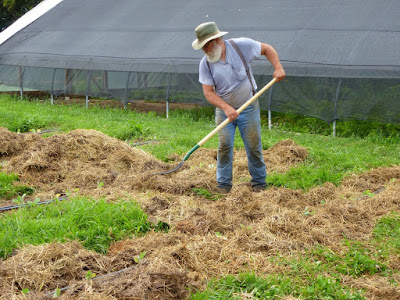 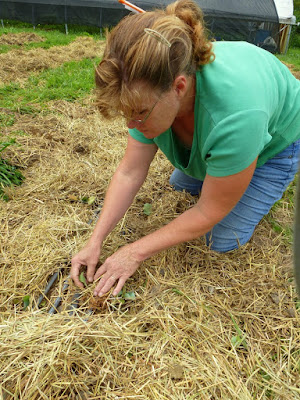 By Wednesday the dry weather was back.


With a beautiful stretch of weather in the forecast, the hay guy was busy cutting more as we picked up the second wagonload. He was hoping to have it ready by Friday, but completely understood that it would be at least Monday before we could get back to get it.


On Thursday, we had visitors. And, yes, we did make them work…just a little. Thanks, y'all.  Saying you can never start too early, Grandpa-Boss got that little guy (who is not so little) up on the tractor with him.

He seemed intent on the steering wheel… 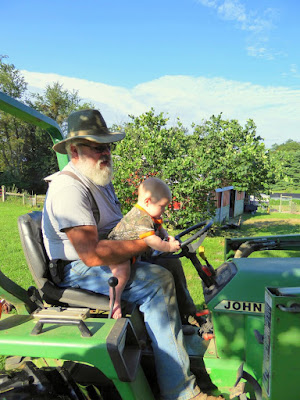 ...and he wasn't real sure WHAT to think of that other "helper". 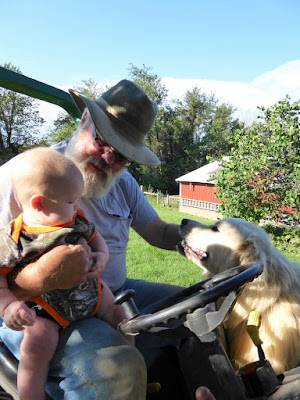 …and then it was Harvest-Friday. 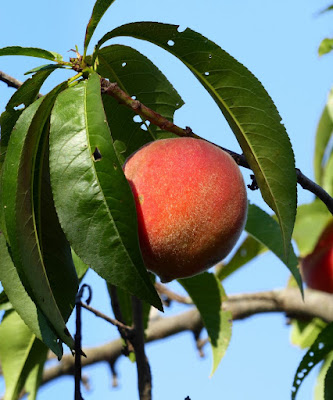 In addition to our regular picking schedule, we had to add rescuing peaches to the list.  The Japanese Beetles have arrived in full force and they are intent on eating EVERYTHING.  The birch tree in the front yard looks like lace.  The wild roses out back are simply bare. And, now they have moved into the orchard and the gardens.  We salvaged what peaches we could and vowed to “never let that happen again”, so I guess we will be studying up on orchard management before next season.

We’ve never seen a year with quite so many bugs (of all types) and the weeds are truly phenomenal.  This must be due to the fact that we didn’t have a late season frost like we generally do…and the Spring was so very wet. Different weather…different problems.

Despite the heat issues and the Japanese Beetle invasion, we had an amazing amount of stuff for Market.  In fact, I took the peaches with me since they wouldn’t ride safely in the cram-packed Market trailer.

It was crazy busy at the Market. By 10am, we had completed 100 transactions and we were sold out of a fair number of items! We simply had a great day. A big THANK YOU to all our loyal customers.

There wasn’t much left to take back to the hill…and that’s always a good thing. We will just have to add a little canning/freezing to our list of things to do this week.

After supper, the Boss and I were just relaxing when we heard rain. I mean RAIN. Again, the heavens opened.  This time, we got over ½ inch in about a half hour.  Looking at the radar, we were the only location in the county to get this little storm.

Incredibly, we actually needed it after the past week of hot, breezy weather.  I’m sure the little brassica plants and the potatoes we planted last week will benefit greatly from the moisture.

The upcoming week will include a roadtrip (the processor called---the lamb is ready) more hay hauling (the Boss thinks we can cram one more wagonload in the barn) , more seeding, planting and some hoophouse work (it’s time to think about fall and winter crops)…and I think he said something about getting the early potatoes harvested…

Today is definitely going to be “a day of rest”.  We’re gonna need it!

Thanks for stopping by.  Come back and “visit” again real soon.