A change from the routine and mundane comes at a price…

There was a mountain of culled tomatoes sitting in the middle of the living room and I knew there were even more in the garden, begging our attention. Breakfast time revealed there wasn’t even one slice of bread anywhere to be found. An avalanche occurred on my desk, and laundry was spilling out of the hamper. I think I saw a basket of pears sitting next to the woodstove…

…and I was supposed to think about what had happened in the past week?

Couldn’t happen. I tried, I really did. But, the chaos was too much to bear.

With a little concerted effort (and serious help from the Boss) some of the tomatoes were sauced.  Many more were put up for our Winter Sales. By supper time, several loaves of bread were cooling on the counter, the laundry washed and folded…I even made a cake! The desk avalanche was confined to a box with a promise to myself to get the filing completed soon. The animal chores were done (again) and it was time to relax.

So, I know it’s Monday, but…here’s Sunday’s walkabout review of the week.

Last week was unusual in that we were actually off the farm more days than we were on it.  Hence the catch-up day.

If somehow anyone missed it, we all went to the hospital last Sunday and welcomed Blake to the world.

A lot of people asked me how the cousins reacted to each other.  All I can say is they were completely relaxed in each other’s presence. In other words, there was a lot of sleeping going on.

While I made the town run, the Boss sauced last week’s culled tomatoes. I spiced them, cooked them and then he canned them off.  We now have 16 jars of pizza sauce ready for our wintertime larder.

On Tuesday, the Boss and I headed out to “shoot” the fair.  While this sounds fairly ominous and my own position as “second shooter” seems to indicate possible action by Homeland Security, we actually went to take photos at the  Rockingham County Fair  for the fourth year in a row at the request of our friend, Jeff, the Fair Manager.

Coming up with something original is becoming a bit of a challenge. Since this is an actual paying gig, the Boss is more than a little particular about our work.

The constant drizzle that turned into an all-out rainstorm didn’t make things any easier.  Expensive camera gear and water are not a good combination.

It’s interesting to note how the fair has changed over the years…and how some of it is probably the same as it was when the fair first started in 1949…and surely since it opened at its current location in 1980. At some point, I should write about the fair.  But, I think I’ve been saying that since the first gig… 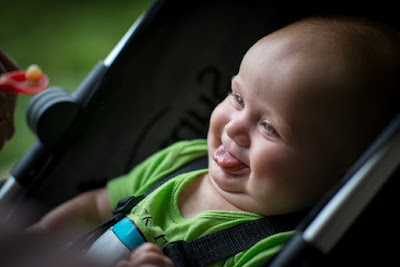 I have to say…I got just a little distracted by my lunch-date and probably wasn’t a whole lot of help.

But, I am certain the Boss did another great job. 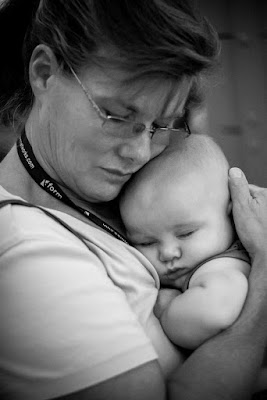 Wednesday we did a little catch-up work, but the rain began in earnest this time, so outdoor work was out of the question (again). And, Grandpa hadn’t gotten the opportunity to hold the newest little man, so we took the new family some food and passed the baby around for a bit.


And, then, it was time to get ready for the Market.

…and mow the grass (again) and plant some more lettuce, and…wait a minute…are those pears ready?  Hey, look grapes!

Despite the marauding deer herd’s best efforts, (they have eaten just about every leaf on the lane side of the fence) there was a fair amount of concord grapes on the little vine at the top of the lane. Concord grapes seem to remind a lot of people of their grandmothers and sell well simply because of the memories they evoke. It helps that they make very tasty jelly!

We then set to work harvesting some of the pears.  The pear trees are loaded to the breaking point (literally) and the pears are beginning to ripen.  Although not like you might think.  Did you know pears ripen from the inside out?  So, if you leave them on the tree until they are yellow and soft on the outside, they are all mushy, grainy and generally gross on the inside. You pick pears when they are green and hard and allow them to sit for a few days prior to eating. (but, not too green and hard…there is a “sort of” science to it) Yes, I did learn this one the hard way.

The pears aren’t very pretty, but they are very tasty. And it looks like we will have them for sale for at least a couple of weeks.  There will probably be some apples, too.  There is a definite up-side to the wet Spring weather.

And, tomatoes…the tomato harvest is immense. And they are big and beautiful, too. The Market was awash in tomatoes on Saturday, so although we sold a great number, there were lots left over. Which led to the mountain in the living room. But, those will be a treat come the cold, dark days of winter. 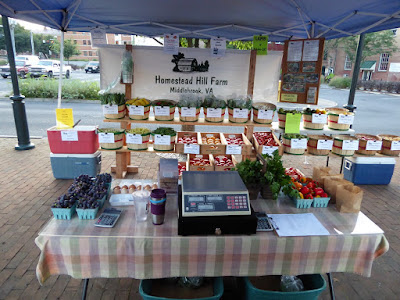 The Market was incredibly busy. It was a beautiful day, there was nice jazz music for ambience and there were people everywhere. I guess with the beginning of school, a lot of folks get back into a regular routine of cooking at home. With the exception of some tomatoes, we had very little left to share with the  CHURCH  that collects any leftovers at the end of the Market day to use in their lunch program for those in need.

With the Market completed, it was time to head home, relax some so that we can "gird up our loins" and do it all again.

The summer crops in the garden have slowed down considerably and some of them are completely spent and need to be removed. There’s still weeding, post-season garden clean-up and hoophouse planting to do,  so it doesn’t look like we will be slowing down quite yet.

Hope you HAD a Happy Sunday!

Do come and visit us again real soon!