Tess celebrated her two month anniversary with us by going to the vet. (poor thing) But, in all that time, I hadn't told you how we came to have our newest little kitty.

After Miss Kitty passed,, I really wanted another friendly little cat to accompany me on my chores, to sit on my lap on the porch, and to snuggle on the couch on winter evenings.  …oh, yeah and hunt mice…But the thought of searching for a replacement put me off time and time again.  Maybe a kitten would just show up!  That’s how Squeekie came to live on the farm…but, what were the chances of that happening again?

The seemingly endless supply of free kittens in Craiglist and the Bulletin Board had apparently dried up.  Weeks turned into months with no kittens in sight.  Blondie had a friend with some kittens, but for one reason or another, that didn’t work out. At some point, I bought little bowls and a bag of kitten chow, but still had no prospects.

On the fourth of July, my phone rang.  “Hey, Mama…you still want a cat?”

Toughchick was at a huge yardsale in another town and someone was giving away kittens.  “you want this little orange female?  I can bring her by this afternoon.”

Something made me say yes.

So, later that day, in the pouring rain, Tess arrived wrapped in a towel. She was so tiny! 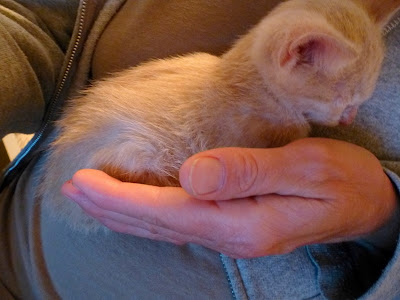 She fit in my hand…which is where she felt most comfortable…so, I held her. She sat in my lap while I worked on the computer and slept on my chest all night long as she adapted to a new life here on the hill. I didn’t get much done those first couple of days. 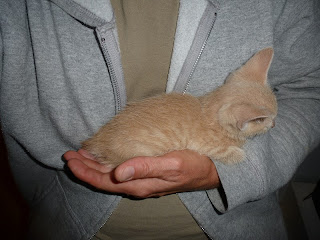 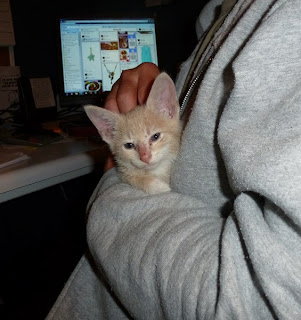 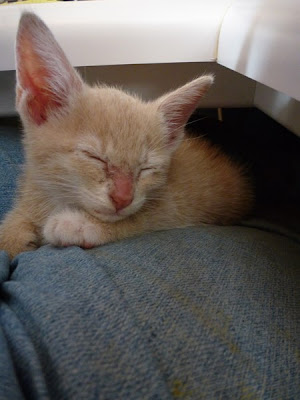 It became obvious that this tiny kitten had fleas.  Oh..no…fleas?  I had held her all night on the couch…I began to feel itchy. The vet was booked until the following week, so I was on my own.  What should I do for a kitten with fleas?   I had to do something…just thinking about it was making the itching worse. A bath!  Now, that would be fun.

Apparently, we did the right thing, because the vet praised my pro-active approach when we did get to the office for her first check-up and shots.  The fleas could have thwarted her growth or caused illness and possibly death in a kitten so small. She did have some residual skin issues from the infestation. That's why her little nose looks raw. 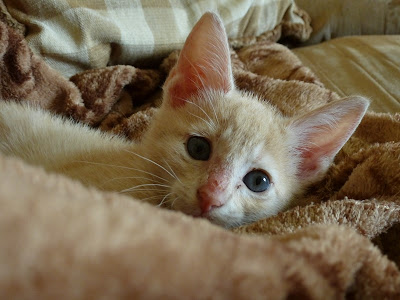 The vet needed a little history of the kitten. Did I know her age?  How had she been raised up to now? I couldn’t tell her anything other than “her mom was Siamese and her dad was some big orange tom.”  The vet tried another tack...”where did you get her?” 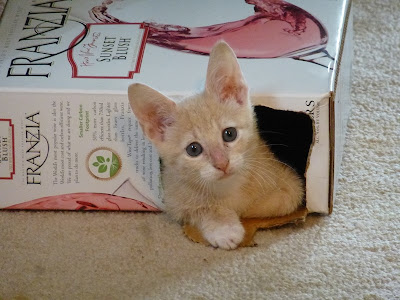 “Well, you see….my daughter was at this yardsale….”

A yardsale?  You got a kitten at a yardsale?  (gee, that didn’t seem that unusual to me…I thought you could get everything at yardsales)

The news of the yardsale kitty went around the office.  Suddenly, Tess was a tiny celebrity as all the techs oohed and aahed over her. 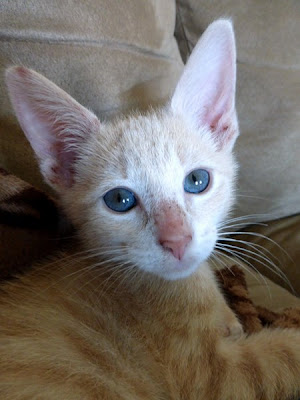 Since that first vet visit, she has more than doubled in size, claimed the couch for her own, and been introduced to the larger “pets” on the farm.  Upon introduction to Ellie Mae, she bopped Ellie in the nose and Ellie is still not too sure about the wiggly little creature with the enormous ears.  The other cats were not impressed, but, as long as Tess stays out of their food…things should be okay. 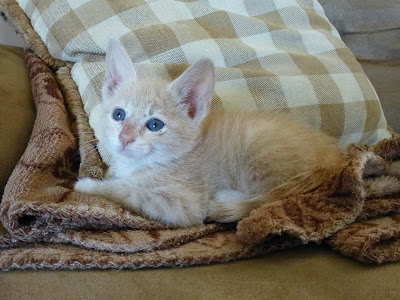 At some point, she’ll head outside on her own to test out the theory that big ears make a good mouser.  Until then, she seems content to sit quietly on our…no, wait…HER couch…turning into the Mbrook stealth ninja from time to time to attack bare feet  for sport.

But, she’s cute and cuddly and it seems like she’ll be a good fit here on the hill.

Today, I am thankful for our little yardsale “kitteh!
Posted by Barbara at 8:46 AM