“We really don’t need to rush into getting another puppy…”

The Boss’ voice caused me to jump a little.   I was really thinking about something else…

“We really don’t need to rush into getting another puppy.  I mean, we’ll find one…don’t worry ‘bout it.”

I was still pondering whether or not I had missed something obvious…whether I could have prevented Jed’s unexpected demise…maybe I caused it? Here's what happened.  There had been no symptoms.  What did I miss? Puppies were the last things on my mind.

The day passed strangely.  Jed had been part of the landscape for a long time, his absence made things weird to say the least. Ellie seemed rather lethargic…could she be sick as well?  My brain was beginning to hurt from all the thinking.

When I walked inside after chores, the Boss was already at his computer.  “Hey! Look at this!”

Pictures of puppies…little, fat Pyr puppies…were up on the screen.

“I thought I’d just look at Craigslist. And…well, these guys were just born, they won’t be ready for a while yet, they’re not too far away, and look at this price!”

…and so it began.

Emails were sent, a check was mailed and time passed. 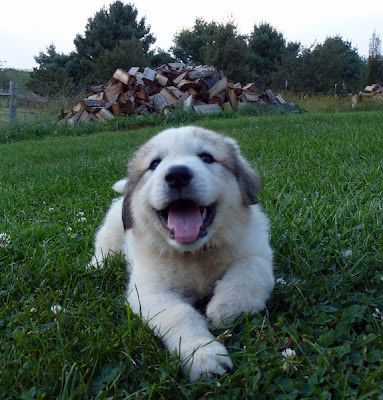 …so today I’m thankful that the Boss didn’t take his own advice.

More Gus stories (and lots of pictures) to follow.  Have a great Thursday!