In the Good Old Days

No amount of money could pay me
To go back and live through it again!
-dolly parton


“Don’t use anything your grandmother or great-grandmother wouldn’t recognize as an ingredient.”

This statement is making the rounds these days. A popular "food-issue" author is touting this as the newest of ways to make food choices, spinning it for all it's worth as he travels around the country.  (cynically, I think he's looking to sell more books, but...)

While I wondered at the statement and tried to determine WHAT DOES THIS GUY MEAN?--- it got me to thinking about my great-grandmothers and their daughters, my grandmothers.

Now, those were some amazing women. Our modern life may seem fast-paced and somewhat stressful, but most of us have no utter idea how grueling daily life was back in the late 19th and/or early 20th centuries.

The whole romance of the “good old days” is somewhat laughable if you stop and do any serious amount of thinking.  As the lyrics that open this piece state:  we'd get up before sun-up to get the work done up…every day…all the time. There was no easy way to do the daily chores, no automatic coffeepots, microwaves, dishwashers, toasters or many of the other things we take for granted when we roll out of bed after the alarm clock wails.  Oh, wait.  No electric alarm clock, either!

My great grandmothers were born in the decades after the Civil War into a world far different than the one we know today. "Hand-made", "home-grown", and "local" weren't trendy definitions...those words described everything these women were able to provide for their families. And, they devoted their entire lives to those families.

I'd like to introduce you to two of these amazing women.

This is Irene, my paternal great-grandmother. She married my great-grandfather, Sidney, shortly after her twentieth birthday. She became a farmer's wife on the Eastern Shore at the the end of the 19th century.

I might add that Great-Grandad was known as a prosperous farmer. This is a great accomplishment, no matter the century! They embraced the modern age and the opportunities it offered them and their young family.

But, I never got to meet her.  Because health-care was what it was in the early 1900’s, she (and an infant child) died when my grandfather was just six years old.  Her untimely death, at the age of 33, left my great-grandfather with four very small children to care for until his death from appendicitis a just few years later.  The four orphaned children were then separated and went to live with various family members.


When my grandfather died, nearly 80 years later, his brother was still lamenting the loss of his dear, sweet Mama. It was heartbreaking.

In the good old days…I think not.

This is Hilda, my maternal great-grandmother.  I never got to meet her, either.  My great-great grandparents immigrated to America from Sweden when Hilda was just 2 years old. The picture at the right was taken the year before she married my great-grandfather at age 15. In the course of their marriage, she gave birth to THIRTEEN children while travelling across the country with him in his work as a machinist, coming east to raise their family in Atlanta, before one final move to Florida, just prior to her death.

I cannot imagine that she would describe any of that as “the good old days”…she lost four of those children in either infancy or as toddlers.  She passed away at the age of 57, when her heart simply gave out. A loss that haunted her daughters for the rest of their adult lives.

One lesson that Hilda did teach all her daughters (the girls in the family far outnumbered the boys) was to embrace modernity.   I remember hearing the stories as my grandmother and her sisters would talk of “Momma” for hours. Apparently, she quite a feminist, despite the fact that the term wasn’t used at the time. She didn't want her girls to settle for the life that she saw as her only option.   Most of her daughters (my grandmother in particular) would go on to become career women long before that was an accepted path for women. They eagerly embraced progress in most every aspect of their lives.


…and while I never loved anyone quite like I loved my grandmother, she was a horrible cook.  My "Danny" didn’t recognize a whole lot of things as ingredients!

A family dinner at my grandparents' home always included some sort of cooking fiasco. For years, I honestly thought that dinner rolls always came as little frozen balls of dough that one coated with Crisco prior to baking...and then the blackened/charred bottoms were carefully sawed off before serving. Good manners kept anyone else from ever mentioning this at the table.

But, baking aside, my grandmother taught me everything I know about true hospitality and concern for my fellow human beings. Everyone who ever entered their home felt loved and cherished.

There will never be anyone quite like my "Danny"!


To assume that these women would refuse to accept or embrace today’s food options is a ridiculous claim. They spent hours preparing one meal.  Food procurement was an arduous task, and housework and meal planning were their entire world.

No career path, fun hobbies, or hopping in the car for a little shopping, not when there were meals to fix! ...and playing on the computer...ha! (hadn't even been invented yet) Think about that one for a minute. Certainly NO one wants to return to that.

Many things that they considered progress are under fire by today's food elite.  We (as modern folks) need to recall the entire picture from the "old days" in order to truly understand why and how things have changed over the years. For instance, the introduction of refrigeration changed food preparation, storage, sales and procurement forever. Imagine for a moment a world without refrigeration...or the ability to freeze foods. (that alone is a whole new blog entry!) If we want to "turn back the hands of time", we need to understand it would have to come as a package deal.

Progress is not a bad thing. It may bring with it new challenges, but anything that makes the daily work of life slightly less overwhelming is welcome.  I'm pretty sure that great-grandmothers everywhere would have agreed with that one.

And when it comes to recognizing ingredients...
Did you know that today's food labeling regulations require that every ingredient used in a product be identified?
Every. Single. ingredient.

For instance, if something has chocolate chips…every ingredient in the chocolate chips must be identified.  I know I would be hard pressed to come up with that information and I’m pretty sure that one would have totally escaped a whole lot of my ancestors!

Wait a minute…chocolate chips are a fairly modern thing, too. That fact alone threatens the whole basis of this "food theory".


...and personally, I find considering a world withOUT chocolate chips more than a little disturbing!


When you read the ingredient label on food many of the things listed are vitamins…would my great-grandmother, the Swedish immigrant who knew little English, recognize those?  Should I only eat foods that she would have fixed?  In the manner she fixed them?  But, there are a lot of things in the traditional Swedish cuisine that I really don’t like!

Many of the foods we enjoy in today’s global cuisine were virtually unheard of even fifty years ago. Should we eschew those as well?  My mother-in-law used to tell me that when she was a kid, she’d never even HEARD of broccoli!  (actually, she told me it hadn’t been invented...and I laughed a little.  Thomas Jefferson was purported to grow broccoli at Monticello...long before mother-in-law was born) But, broccoli was not consistently available years ago. Today…broccoli is touted as the health food and you can find it fresh every month of the year.

We are incredibly blessed with abundant, accessible, affordable food. (Something I know for a fact my great-grandmothers and grandmothers did not have)  Rather than pick it apart and fuss and fume over things that are really non-issues…we need to focus on the positives.

Instead of making it harder and harder to find food that is acceptable for our very spoiled, first world palates…it’s time to remember to simply say, “THANK YOU” for everything we have. 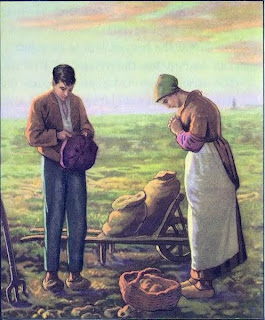 I'm pretty sure that we've got it good...even if it's no longer the "old days".