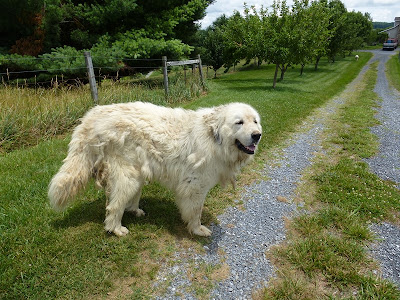 So, surely…surely…we could give a dog a haircut.  I mean, we’ve done it before. Read this. 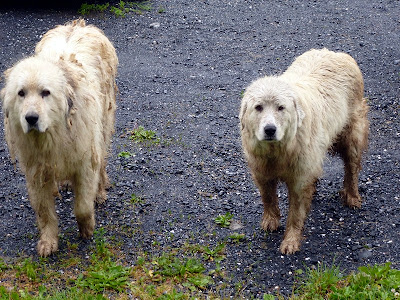 It’s been two years since I wrote that story.  Those two years haven’t done anything for Jed’s appearance.  I mean NOTHING.  His fur was a dirty, matted mess.  There were grass and burdock seeds down near his skin.  I worried they might sprout.  His naps in the soft dirt or hay of the barn didn’t help.  …and there was no denying it…he smelled AWFUL!  The hot, humid days were just making things worse. 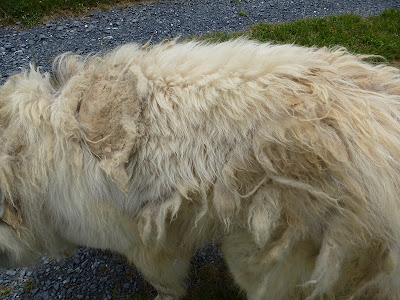 The weather was playing havoc with our garden schedule once more and we found ourselves with a small chunk of free time, a dry dog, and the determination to put aside a nagging job.  We joked about the need for a dog groomer, or at least a sedative.  But, really…we could do this…how hard could it be to clip a dog? 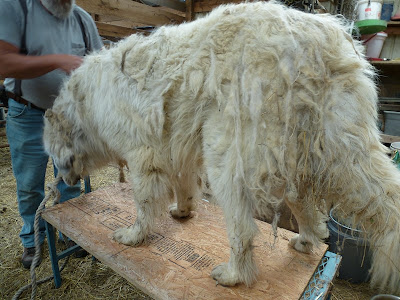 The Boss got out the sheep stand, hooked Jed in, and fired up the clippers.  Jed tried to jump off the stand.  He did get his head free and growled unhappily.  We re-positioned him.  I stood in front of him and held his face tightly.  The Boss fired up the clippers again.  At the end of the first blow (line of cutting), Jed tried to jump off the stand again.

Oh, this was going to be fun.  NOT

Jed’s latent fear of noises seems to be getting worse. Thunder, gunshots, loud motorcycles reduce him to a trembling mass of fur and drool. So, we put the clippers away and started in with scissors.  The scissor method would take far longer, but it was better than having a hundred pounds of dog jumping through the air.  The Boss took one side and I worked on the other.

But, it was getting hotter by the minute.  I think my eyelids were sweating…and my glasses were slipping down my nose. Fluffy white dog fur began to adhere to my sticky skin.    blech! 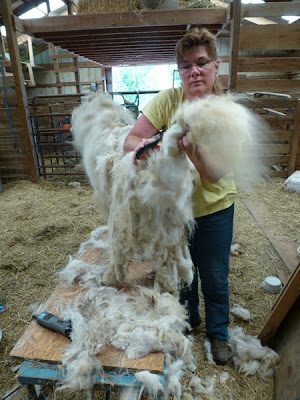 Snip, snip…Jed started to calm down and acted as if he was enjoying it.

Snip, snip…he was enjoying it.  He wagged his tail just as I snipped the hair at the very end.  Ack!  Wait a minute!  Is that blood on my scissors?

Wag, wag…oh yes, it was definitely blood…and with every happy wag of Jed’s enormous tail, blood went everywhere.   Little splatters of blood landed on the front of my shirt, mingling with the dog drool and fur that were already covering it. We both ended up with dog blood down the front of our jeans.  Oh….ewww….

How could such a tiny injury cause such a mess?

The Boss suggested that we band the end of the tail in order to stop the bleeding.  Once the little rubber band went around the tail, the bleeding stopped.  We finished the job with no other calamities. 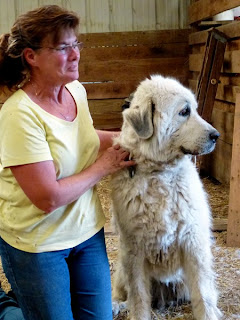 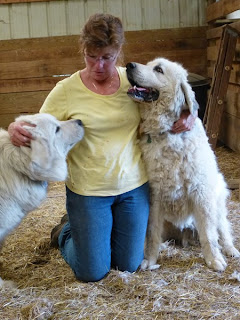 Although Jed is incredibly lumpy, he does seem cooler. 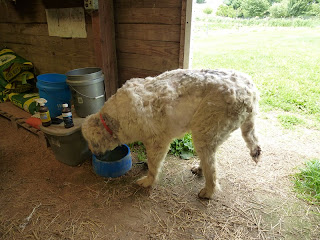 His little tail injury didn’t seem to faze him a bit.


Ellie got a little haircut, too.  Thankfully, no injuries were reported.  For some reason, she kept jumping up and flouncing around the yard.  I think she was showing off her new look. 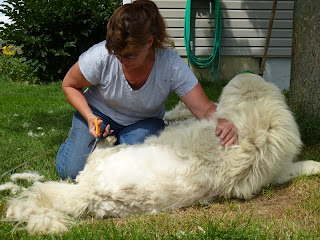 As I finished trimming the worst bits of Ellie's fur, the wind picked up.  Drifts of fluffy white fur began billowing in the breeze. 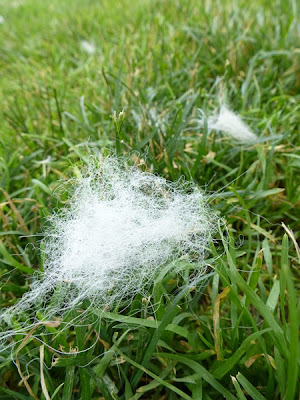 The backyard looked as if some horrible disaster had befallen an entire herd of stuffed toy animals, bits of fuzz stuck to the grass, the trees. I could see it floating in the breeze toward M'brook.  It took some serious raking, but containment was mostly successful. If you should see clouds of white fuzz floating past...don't be alarmed...just remember this story. 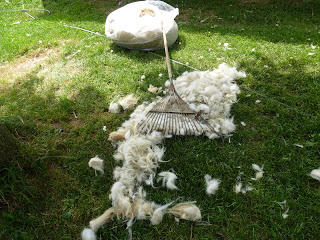 By this time, I was covered in dirt, drool, blood, sweat, blood-stop powder, iodine and dog fur.  The prolong snipping with the scissors raised blisters on two of my fingers.  The smell of blood-stop powder and dirty dog seemed to have permeated my every pore.

While I’m all for “Do-It-Yourself” and we have the skills to do a lot of things, dog grooming is certainly NOT one of my talents. 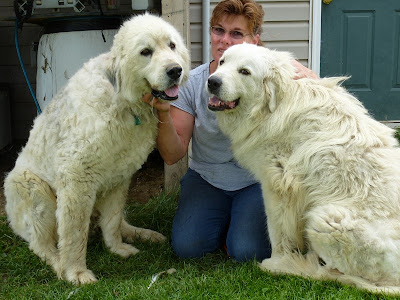 Next year…we should find a professional.
I'm pretty sure Jed would agree!