Not As Bad As It "Coulda Been"

For the record, I do NOT like phonecalls that begin…

“Mama…just so you don’t freak out…”

She sounded so calm, cool and collected, I wondered why she was even calling to say that she had a (her words) “little boo-boo”.   Apparently, she had lost control of the hubs’ dirtbike and injured her leg with the foot peg.  “looks like I need some stitches… no, you don’t need to come.” and, THAT was the end of the conversation. I had been on the phone with my other daughter(EMT chick) at the time and passed the news on to her.  We both worried and wondered about the situation.

I had no way to know that prior to the phone call, she had injured her thigh after losing control of the dirtbike, she had been transported by ambulance to the local hospital, after rescue had considered flying her over the mountain to UVA, and she had been x-rayed for broken bones.  She sounded so calm.

I mention sounding calm because our youngest daughter didn’t inherit her dad’s laidback approach to life.  She came into this world screaming and has her mother’s tendency to yell first and ask questions later. In retrospect, the calmness was eerie.

There were few further details that night.  I did check with SiL, they were okay and going home.

A “mama check-up” call in the morning revealed that she had gotten 19 staples in her thigh and her elbow was sprained. WHAT? 19 staples? WHAT?

When I passed the news to EMT-chick , she immediately turned into superEMT and began re-evaluating the situation. She got on the phone with her sister. Later, she was the one who revealed the ambulance ride and all the EMS considerations of the situation.  Did I know what could have happened?  Did I know how lucky she was?  You know what the worst case scenario could have been? Gee, and she had sounded SO calm.

The Boss and I were processing chickens, and had promised to do a few roosters that the kids had been raising.  Since she was incapacitated, I offered to come and get them for her.  That’s when I heard the entire story and saw firsthand the damage (sorta). 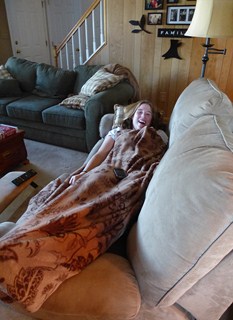 …and that’s when I realized that this wasn’t as nearly as bad as it "coulda been".  If the wound had been deeper, or in a slightly different location… things could have been more than horrible. The doctors and nurses repeatedly told them how lucky she was. A complete recovery is expected.

When we finished our processing day, I delivered the birds and brought Blondie over for a little “home-care” here on the farm.  I don’t suppose she really needed the excitement of the Battle of the Whistle-pig, but at least it was a change of scenery.

Supper with the folks, icecream on the couch, and watching M*A*S*H re-runs with Papa was most definitely NOT how they had anticipated spending their second anniversary.

Happy belated anniversary, kids…and many more!
Posted by Barbara at 6:32 AM