Never Been So Close to Something That Wild 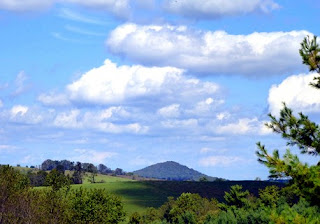 It was a gorgeous October day…I had the tunes cranking on the awesome Xterra stereo system…life was looking much better than it had for quite some time. I was heading into Staunton to finally resolve an issue that has been weighing on my mind for about two weeks and giving me a very real stomachache.

As I crested one of the hills on M’brook road, I noticed yet ANOTHER political sign had sprouted since I last drove to town.  Now, let me say one thing about living “out here”…we are an opinionated bunch…and some of us are extremely outspoken.  An election year means that a whole lot of people feel it necessary to voice their vehement opinions.  …and that’s okay. I’m all for freedom of speech and all that. But, for the record, there are no political signs here on the hill…and I hope there never will be.  And, that is the end of THAT subject. J

While I was trying to figure which of the neighbors paid to have this ginormous sign in their field, I noticed movement.  I haven’t seen Sam and Joe’s cows and calves for quite some time, so I knew it wasn't a cow.  It looked like a chicken…no…wait…it was WAY too big to be a chicken! And, I don’t know of any white-headed black chickens…besides…

Oh, my gosh…my camera…is...at home…Oh dang!  Can I pull off and take a picture with my phone?   Because I know at least one of my children will never believe this one!

As I wondered, the enormous creature took flight, completely obliterating the sky as he flew directly over my vehicle.  OH WOW!  I kept looking in the rear-view for another sighting, while trying to figure out if I could pull off, turn around and somehow get a photo.  No such luck.

It did seem oh so very appropriate that Chris Cagle was singing “Never Been So Close to Somethin’ That Wild" at that particular moment.(Okay, I know he was singing about a girl….)

I completed my errand and felt the tension beginning to fade. I made a couple of other stops and headed home, still thinking about the EAGLE.

Lo and behold, when I got to the same spot on M’brook Road, there he was!  Sitting right by the road, completely unconcerned. He had apparently found something tasty by the road’s edge and was not at all disturbed when I slowed beside him.  With traffic behind me, I couldn't come to a complete stop.  I needed to pull off the road. Like...right now! Whoa, NOT in RG’s cornfield that he had just seeded with winter rye! Hurry, hurry…where could I stop?

I pulled off a little ways down the road where Sam and Joe unload their calves and I started walking back toward the eagle.  I got a couple odd looks from car drivers headed southbound.  I wanted to holler “dude…an eagle…you just drove past an EAGLE!” The eagle was still sitting by the roadside. How could they have missed him?  The pick-up truck drivers just waved…I think I knew most of them and they probably just chuckled when they saw me hiking up the fenceline.

Finally traffic caused the eagle to return to the field. Phone pictures just made the Eagle look like a black and white blob.  There was no way to capture the majestic beauty that I was privy to on this October day …and words fail.  Wow…just Wow! I can only hope we see him again when the Boss is along and toting all his camera gear.

Augusta County offers some unique birding opportunities. Rockfish Gap in the eastern part of the county is a raptor “superhighway” of sorts.  The Augusta County Bird Club has noted sightings of at least 307 types of birds in our county.  There are lots of sites specifically geared toward birding and a lot of folks are involved with the activity. Honestly, the wildlife is something most of us just take for granted. Today’s experience may have changed that to some degree.

Just recently, someone asked me about eagles when they learned we are located in M’brook.  Apparently, there is one (some?) that have been spotted repeatedly. Who knew?  We had seen one off in the distance years ago, but I had never seen anything like this.

I looked that eagle in the eye.