It's the Thought that Counts 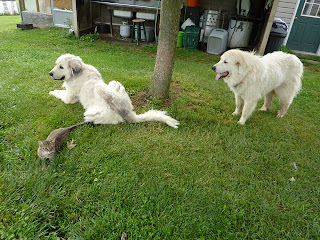 Living on a farm, with three cats and two dogs as part of the “home team”, you really begin to wonder sometimes…

All those “offerings” on the porches, in the barn, by the vehicles…are they really tokens of great affection?  Or did “someone” lose interest once the thrill of the chase was over and forget to clean up after him/herself?

Lately, I have gotten a lot of surprise “gifts”.  Dead mice, shrews, voles, a rat (I think), a partial rabbit (don’t ask…that one was GROSS).  Yesterday, I got a groundhog.  Yep…a whole stinkin’ groundhog. (quite literally) …and to think I almost missed seeing this one! 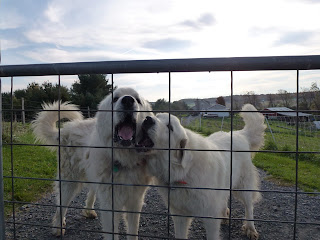 The Boss was headed to a Market meeting, so I rode down to the mailbox with him.  It is really helpful to have a passenger to get the gate at the top of the lane when you have to drive somewhere.  The gate is not to indicate that we are anti-social, it is a pre-emptive measure protecting us from the errant calf, horse, sheep and/or dog that may be wandering up or down the lane. I know for a fact that each of these species has been stopped by the gate.  I think it may deter deer as well…maybe even foxes and coyotes (but, that may be wishful thinking). 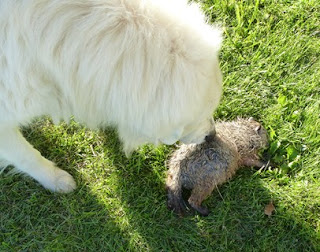 I walked up the hill from the mailbox, enjoying the lovely evening. When I came back in the gate,the dogs were there to greet me in their usual fashion and I noticed blood on Ellie Mae’s face.  There were just little splatters that indicated it was not her blood.  I checked Jed, but couldn’t find anything. While I wondered what happened, I didn’t give it a whole lot of thought. I was thinking ahead to my next project.

They were both agitated and drew my attention to something in the orchard. They were doing their "happy dog" thing that they do when they seem to think I will be pleased with their antics.  At first I thought it was Boooyyyy taking a nap in the grass.  Closer examination indicated that it was a groundhog…a very dead groundhog. 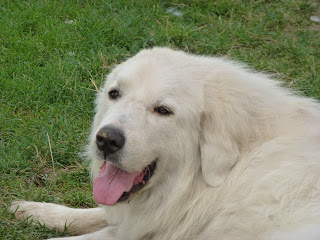 An etiquette question for all my Facebook friends...
When being presented with a DEAD GROUNDHOG as a gift, should one:
a) shriek and recoil in terror
b) do some sort of "omg, this is so gross!" dance
c) accept graciously, offering gratitude to the giver
d) try to keep from "losing one's cookies" (oh, the smell...)
e) try to pawn it off on someone else (or should I say, re-gift?)
f) wait until no one is looking and dispose of said "treasure"
g) some form of all of the above

I must say...there are times when I wish I was NOT quite so loved. LOL
Farm life....Nuthin' like it!

I admit it…I did EVERYTHING on the list.  Ewww, blech!  I really don’t like dead stuff.  However, SOMEBODY had to do it…so I took care of it, leaving my next project for some other time.

Yes, I praised the dogs. (I think it was Ellie and NOT Jed…but, they both got cookies)

I texted the Boss in hopes that he would “volunteer” to take care of it.  That didn’t work.

Then, I cleaned it up with absolutely NO thought of taking my friend’s advice to EAT the thing.  Yuck!

When I was young, Dad got his final revenge on the blasted groundhog that was eating his corn, melons and the rest of the garden by shooting it and yes…convincing my Mother to cook it.  I fail to find words to describe the potpie that she made with it.  While my mother was never an award-winning cook, this time the ingredients failed her miserably.  Suffice it to say…been there, done that. …and NEVER again! 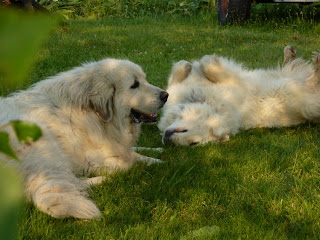 I should have thoroughly rejoiced that at least ONE of the blasted groundhogs that attempt to eat EVERYTHING in the garden/hoophouse is finally gone.