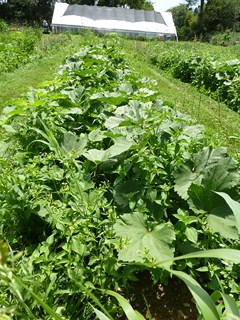 Weeding may be the single-most important activity in the garden.

You can have the most amazing varieties of plants…astounding soil fertility…the most awesome irrigation system…and a sure-fire marketing strategy…but, if the weeds take over…

…it was all for naught.

Simply stated, weeds are just plants that grow where they are not wanted.

Sometimes they are noxious, invasive species that are not indigenous and seem to have some superpowers to grow despite drought, flood, hail and any other natural disaster. Since they’ll grow in all sorts of conditions, they provide a perfect environment for insects that can decimate vegetable crops. These types of plants have caused some farmers to embrace drastic measures and were the impetus for widespread herbicide usage.

This year we have had the perfect weather for the perfect weed crop.  Warm, wet, early spring followed by a warmer, wetter summer.  The weeds are stupendous!  Unfortunately, we don’t make our living growing weeds. I would like to say that some weeds are quite tasty and very nutritious.  But, it is very hard to sell something for profit that people routinely pull out of their lawns!

A lot of folks figure that in order to grow crops, you must eradicate ALL weeds.  Those same folks figure that farmers spray all kinds of glop to get rid of said weeds. Nothing could be further from the truth here on the hill. While it might not be the perfect solution, we have reached some sort of truce with the weeds and manage to co-exist with a fair number of them.  As a matter of fact, there is a great deal of nutrition, for animal and man alike, in some of the plants that we disparagingly refer to as weeds. Our pastures are a mix of a lot of broad-leafed weeds and various grasses and clover. We have feasted on lambsquarters and dandelions more than once.

As of today, there are no herbicides approved for use in the “Organic” world.  Although, this year was the first year that the NOSB actually considered adding one to the list of approved products.

Personally, I don’t like herbicides….and yes, I have actually applied Roundup over the years.  For the record, never to crop producing areas! (promise)  But, herbicides take a while to take effect, and then you have this dying, brown mess that can’t be fed to the animals, and shouldn’t be put in the compost pile.  It just looks so messy!  YUCK 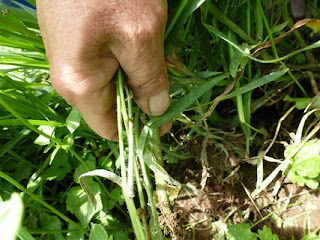 Weeding is the answer!  Weeding is therapeutic, effective, and provides a much appreciated treat for the chickens. It is one activity that requires no specialized tools…just a basic knowledge of “good plants/bad plants” and a little bit of persistence. Unlike cleaning house (which I admit I don’t really enjoy) there is little chance of the freshly weeded garden being soiled by dirty footprints or inadvertent spillages or other unpredicted disasters.  Generally, you get at least a couple of days before the persistent little weeds start popping up again.  There is something satisfying and attractive about a freshly weeded garden. 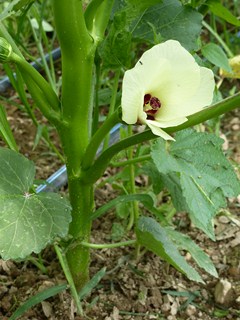 It is vitally important to the crop to be at least somewhat weed-free.  Weeds soak up the essential moisture and nutrients from the soil.  The weeds cut down on air circulation for the crop plants, smothering them or holding in too much moisture and allowing disease to flourish.  In some cases, the crucial pollinators cannot reach the blossoms of the crop because of weed pressure, thus limiting or destroying the yield potential. 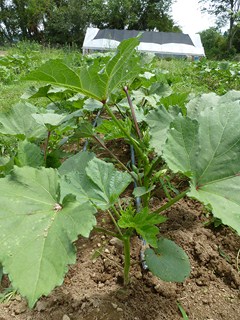 A few minutes (more like HOURS) of intense effort and the garden is tidy, the crops well-cared for and the chickens’ appetites satisfied.

I feel better already!
Posted by Barbara at 6:27 AM