I live back in the woods, you see
A woman and the kids, and the dogs and me
I got a shotgun rifle and a 4-wheel drive
And a country boy can survive
Country folks can survive

We came from the West Virginia coalmines
And the Rocky Mountains and the and the western skies
And we can skin a buck; we can run a trout line
And a country boy can survive
Country folks can survive

I had a good friend in New York City
He never called me by my name, just hillbilly
My grandpa taught me how to live off the land
And his taught him to be a businessman
He used to send me pictures of the Broadway nights
And I’d send him some homemade wine

We’re from North California and south Alabam
And little towns all around this land
And we can skin a buck; we can run a trot-line
And a country boy can survive
Country folks can survive!
I’ll be the first to admit it…I like music with “attitude”. I like those brash and bold lyrics and often wish that I came off far “tougher” than I do.  I don’t think the Boss approves of this; he is concerned that I may identify myself in an erroneous or unflattering manner.  …oh well, whatever...

Lots of people have identified with this song by “Bocephus” throughout the years.  It’s been re-recorded, quoted and mis-quoted countless times since its original release in 1982. So, apparently, I am not alone.

I got to thinking about this song as recovery efforts from the Super Derecho got underway.  The first news footage we saw was of everyday folks out there with chainsaws and handtools cleaning up the mess and debris.  Unlike the coverage of other disasters, no one was standing around wailing and moaning, lamenting their lot in the storm; nope, they just grabbed their tools and got after it. The fussing and cussing started after several days of hot, hot, hot temperatures and no electricity.  (That is another story for another time.)

Some of our customers from the “big city” had come down for the weekend.  As they attempted to venture into town, they were behind some guys in a farm truck.  “It was amazing!” the customer said, “those guys would just jump out, saw up the tree, push it out of the way, and the whole line of traffic would move on!  Amazing!” He just couldn’t get over those guys in that truck. You know, I think I know those folks, or at least some just like ‘em.

If it hadn’t been for those country folks with farm equipment, strong backs and even more fortitude, I dare say that recovery would not have gone so quickly. Life in the country is different than that in the big city. Out here, if it’s broke…you fix it….yourself, most of the time. Or, your neighbor might fix it…but, you at least offer to help.  That’s just what ya do. This is not to say that city folks don’t work hard, but life out here is just different.  In many cases it is imperative that residents are incredibly self-reliant.

By Sunday morning in our own post-Derecho saga, we decided to head to Lowes for the replacement shingles.  The broken shingles had been cleaned up and put in front of the barn waiting what promised to be a mammoth trip to the landfill.  It had been so hot while the shingles were on the ground that the grass is now completely burnt where the shingles landed.  In many cases, the nails blew right out of the roof.  Those too, were burning hot and had to be retrieved so they didn’t end up as projectiles when the lawn was mowed.


With temperatures flirting with 100*, any roof work would have to be done in the very early morning hours so that the Boss didn’t roast up there on that dark roof.

We looked for other roof damage on our way into town.  Hmmm, lots of metal roofing…maybe we should consider a change next time. Although, when a metal roof peels back, there is no easy fix.Thankfully, there was a good supply of our particular brand of shingles. We bought yet another supply of gasoline.  This was one expensive outage! …and it was going to get more expensive over time. But, the important thing was…the freezers were indeed still frozen!  That meant that all the meat for Market and the vegetables for winter sales were indeed still safe (as was our future income). 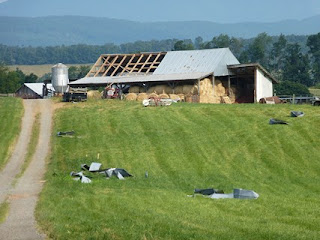 As we headed home, we stopped off to look at Woody’s haybarn.  We were hoping that everything was okay when Woody and “the missus” pulled in the lane to the barn.  They are the most entertaining couple to talk with, well, actually listen to…you don’t do much talking. They detailed their efforts toward recovery so far.  He’d been up most of Friday night checking cattle, clearing the drive to one of his fields and worrying over his haybarn.  She had spent her time worrying over Woody and helping the ailing neighbor. They had seen the roof blow apart.  They spent Saturday installing a large tarp over the hay to take the place of the roof.  In all the years we’ve know Woody, his hay has never been rained on in the field.  Now, his rain will get rained on…IN the barn!  They were both real tired.  She said, “ya know, I’ve done hard work all my life….but, I’ve never been 70 years old before!  We’re takin’ it easy ‘cause today is Sunday.  But, tomorrow, we’ll get the boys to help us and we’ll get this cleaned up.   ‘cause what else ya gonna do?”  Clean up they did.  While the barn is still lacking its roof, all the metal has been cleaned up and hauled elsewhere. 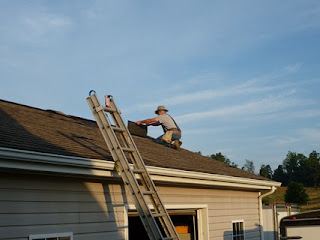 Come Monday morning, the Boss was up on the roof, patching the damage. It was pointless to put in an insurance claim, and much faster to do the work himself.  …and then again, like Miz Woody said “what else ya gonna do?”  The lyrical equivalent to Miz Woody’s comment is ….”country folks can survive…!” 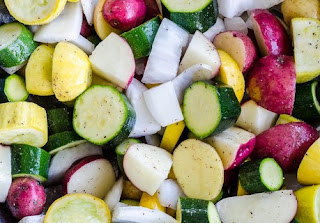 When it came to meal preparation and keeping up with household chores, it was a matter of creative survival.  We live about 12 miles from the outskirts of town and 6 miles from the interstate.  That’s a long way to drive for the possibility of a hamburger. Since we were already using gasoline for the generator, adding more trips for meals seemed superfluous. We are surrounded by food...good food.  We just needed to figure out how to utilize our resources withOUT the aid of the electric stove or all the kitchen gadgets.  Grilled veggies, anyone?  We tossed the leftover zucchini, onions and a handful of potatoes in the grill basket. That served as the basis for supper one night. How about cooking noodles on the propane canning burner?  Okay, and throw that leftover chard in there. Toast?  Yeah, we can do that on the grill.  We did use some meat, although we kept freezer openings to a bare minimum. Actually, all of this was pretty tasty! Particularly paired with ice cold beer or a glass of wine... 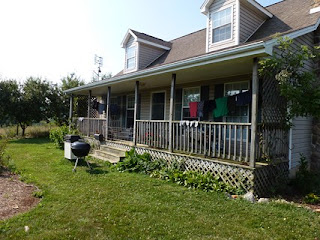 At some point, we realized we had adjusted to this new pattern.  In an odd way, it was rather pleasant.  Okay, roasting in the bean patch wasn’t “pleasant”, but that had nothing to do with the storm.  On the other hand, laundry hanging on the front porch was more than a little amusing.

It may be that ATTITUDE is EVERYTHING.  …and THAT is what allows for our country survival.

… despite the challenges (and several near-meltdowns, both physical and mental) …we did survive.

YAY for bein’ from the country!   "Bocephus" was RIGHT! J