Here's Lookin' at YOU, Kid 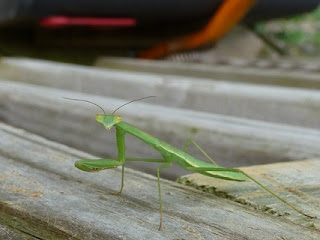 Last week, there was a very small praying mantis that hung out on the front porch for days. He/she wasn’t easily frightened and seemed to be finding things to eat in a tiny spider web under the porch railing. As a predatory insect, it is quite possible that he/she ATE the spider!   I found that he/she was also incredibly photogenic. When I posted a picture of the tiny creature, it got more hits than anything else I have ever posted on Facebook.  Go figure! 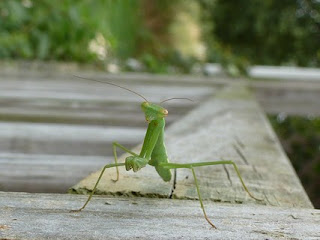 I think I have always thought that praying mantises were fascinating creatures.  This may be due to the fact that when I was quite small we ended up with a huge number INSIDE the house.  I don’t remember the details of the event other than my mother had somewhat inadvertently brought an eggcase into the house.  She enjoyed bringing bits of nature inside and spray-painting them gold. I assume the eggcase was attached to one of those “bits of nature”.  Apparently conditions were just right, or it sat there too long, but one day the baby mantises were all over the dark dungeon of a laundry room.  It seemed as if there were millions…and each was only about a ¼ to ½ inch in length.  In the dim fluorescent light against the darkness of the basement, they truly seemed some tiny, glowing alien invasion.  I don’t remember what happened to them.  But, I can assure you, there were no more praying mantises in the house! 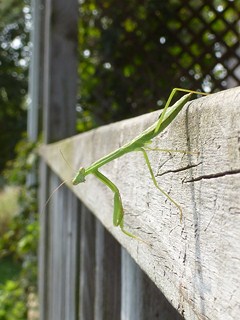 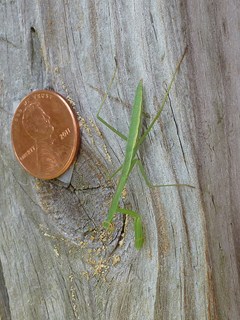 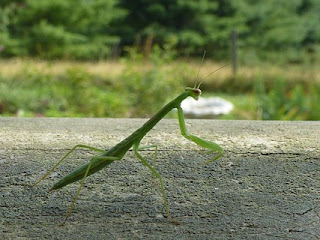 The praying mantis is a truly predatory insect. This means that it only eats insects that it has caught.  It will also eat its young, other mantises…and the end result of copulation is the eating of the male.  Oops, I guess you really didn't want to know THAT!   I guess human beings do not have the edge on family dysfunction.

There are many species of mantids around the globe, each adapting to its environment in specialized ways.  There are few other insects that they will not eat.  However, it seems that ants are too tough to eat. Some other species of insects have developed the ability to mimic the ant in order to escape being dinner for a hungry mantis. 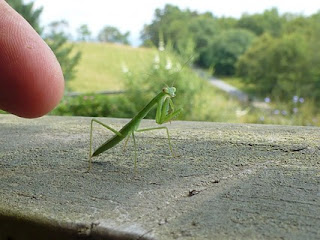 Here in the US, we refer to them as PRAYING MANTISES.  The reference being to the way they appear to draw their little “hands” to their bodies in what appears to be a reverent gesture.  This is somewhat of a misnomer as they are actually getting ready to swoop in and capture their PREY! They also use their “hands” to hold their prey as they eat.

With their voracious appetite and seemingly indestructible qualities, they are highly prized among gardeners.  This has led to the urban legend that it is illegal to kill a praying mantis.  Intense internet research had revealed that this is indeed just a legend.  Although, Connecticut prized the insect so highly that it was deemed the state insect back in the ‘70’s.

For those choosing the truly natural approach to gardening, the eggcases can be ordered online to increase the number of “GOOD insects” on the farm. I read that millions of eggcases are sold annually. 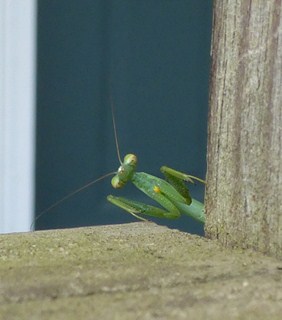 Here’s hoping that no one puts them in their laundry room!
Posted by Barbara at 5:36 AM