July generally marks the point in the summer where we are desperately…and I do mean DESPERATELY…praying for rain.  When the sheep run down to the feeders, it is in a swirling cloud of blinding dust.  There is absolutely NOTHING green around the henhouse---absolutely nothing! When we look at the gardens, it is with a distinct plan of what is in most dire need of irrigation.  July is generally, DRY….DRY…DRY.

This year is different.  Very different.  While all our friends in surrounding areas are praying for rain and complaining about drought, we have been wondering if we somehow became our generation’s “NOAH”.  We are actually slogging through MUD while many of our “neighbors” are worried, really worried, about the lack of rain. Further afield, the Midwest is in the midst of what could be an historic drought of dire proportion. That could adversely affect the rest of the nation.

Folks at the Market have been asking about rain for quite some time now.  “Guess you’re glad to see this rain, huh?”  That was the gist of the conversation for the past two weeks. At first, I played along, thinking perhaps I had missed something along the way….and knowing that you never, ever complain about rain. 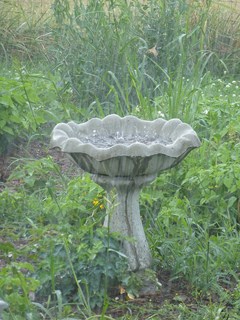 However, as we began to really listen to our friends and “neighbors”, it became evident that we were the only ones getting regular and measurable rainfall.  Since our early days in the Valley, rainfall has been dutifully noted on the calendar.  I realize there are newer ways to keep track of such things. There is probably an app for my phone, but we keep track of precipitation the old-fashioned way. We have pretty accurate rainfall records for the past fifteen years.  I knew we weren’t dry…not by any stretch of the imagination. 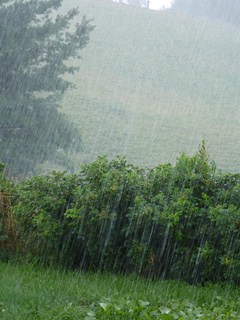 In some ways, it is easier to attempt to counter drought than it is to attempt to circumnavigate flooding.  One can always irrigate in the dry stretches, but there is no way to protect from the ill effects of TOO much rainfall. Hard, heavy rain beats the plants into the ground, allows for the spread of disease and damages the growing vegetables. 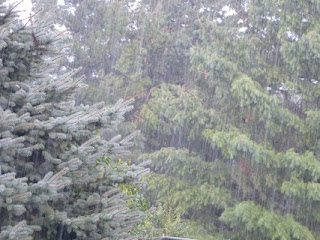 So, while nearly everyone we know is saying “oh, my…it’s so dry…I just blew the dust off those taters when I dug ‘em!”  or…”it’s so dry…my garden’s not doin’ a thing…just sittin’ there…waitin’ for a rain!”…we’ve been slogging through mud, fighting parasites among the sheep, and trying to keep the mold and mildew from being an issue in our field crops. We haven’t had a July like this in quite some time.

Today, if it had not been for radar, we would have figured that the entire Valley was being deluged.  We certainly were!  However, a check of the weather page revealed that we were the only area of the county to be getting the rain…complete with lightning and a RAINBOW!  An inch and 5/8’s later, and the storm finally dissipated. The whole thing lasted under an hour. Oddly, it formed almost directly over the farm and dissolved just slightly east of us.  That may have been the most localized storm I have ever witnessed. 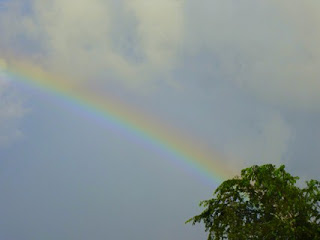 The wet weather has certainly put a damper on our plans for the week.  The planting, cultivating, harvesting may all have to be postponed due to wetness.  While that is highly unusual for this time of year, it’s not completely abnormal.  So, we’ll just improvise and move on.

…and never, ever complain about the rain!