Not Your Typical Friday Night


It started as an ordinary Friday night in June…
The day had been extremely hot, but we were finished with the picking and packing and everything was chillin’ in the cooler.  So, we were just “chillin’” in the house.  I had given serious thought to chillin’ in the cooler myself and had taken a picture of the crowded space and was about to post a picture with a funny caption on Facebook. When I turned on the computer, the weather page popped up…

“Hey! Is it supposed to rain?”

The Boss said he had heard there was a chance… As I peered out the door, we both realized the Market trailer was standing open in order to give the small freezer inside a fighting chance against the high temperatures. The sky was an eerie color and the clouds looked oddly foreboding.  Maybe I should close the trailer….but, it’s so hot!  Guess I’ll check again in a few minutes…the storm probably won’t make it over the mountains…”

The sky continued to darken, and the wind began to blow.  It didn’t start slowly and build up…no, it began to BLOW! The doors to the trailer were now closed, but without being latched, they were going to open again and bang back and forth. I scooted out the door, expecting to get drenched.  No rain, just this wild, whipping wind.  It suddenly seemed incredibly dark.  I gave a cursory glance inside the trailer, “Kitties?”…I really didn’t wait for an answer.  The darkness seemed to thicken.  I ran back in the house.

“I think I’ll check the radar again…” the power went out.  Sometimes the power will flicker and come back.  Not this time.  Suddenly, it was black…pitch black and silent in our house here on the hill.

“ACK! The chicks!”  Day old broiler peeps had arrived on Thursday. Ordinarily, they are kept warm under lights in the brooder.  With the high temperatures, not only were there no lights, we had the doors wide open. Fearing wind and rain chilling the chicks, I ran back into the gathering darkness, despite the Boss’ warnings.
It occurred to me as I ran to the brooder that this was no ordinary summer thunderstorm.  I had the odd feeling that perhaps I was in the “Wizard of Oz” as I felt the sting of dust and dried leaves and branches hit my face. What was all that stuff swirling around in the darkness?  I didn’t see the dogs, cats or sheep anywhere. Quite frankly, I didn’t even look for them.  I slammed the brooder door and latched it and ran.  Thunder roared and lightning ripped through the darkness. Scary, scary, scary!

With a very early wake-up time for Market…AND no power…the Boss suggested heading for bed.  What else could we do? I couldn’t think about sleeping.  It sounded SO scary out there. There were huge bangs and cracks and the sounds of thunder were horrific. We haven’t had wind like that since hurricane Isabel went directly over our house back in 2003.  That time the 70mph winds caused the walls to moan and shake. The girls were young and one was very frightened. Things are different now…they are all “grown up” and moved on to their own homes.   In the back of my mind was the thought that one of my offspring was out there…somewhere in the dark and stormy night…putting in her time as an EMT with the Rescue Squad.  I kept telling myself to be a cool mom and not text urgently to find out where and how she was.

I relaxed a little when SHE texted me.

I nearly bounced off the couch as my brain grasped the fact that I didn’t hear BOTH dogs.  Jed is BEYOND terrified of storms…he has wedged his way into the house during bad weather in the past. What could have happened to him?  I opened the door.  The horrible wind had completely abated.  There were stars twinkling overhead.  Was that a full moon?  I could hear a dog in the distance as Ellie came bounding toward me.

I stepped onto the porch. Ewwww, what was that?  Something cold and wet was under my bare foot.

Our pets have been known to leave me “gifts” on the porch.  I was more than a little leery when I shined the flashlight down toward the deck.  Oh, good…no creature…just a piece of shingle.  Shingle? SHINGLE?

I grabbed the BIG flashlight and headed out…fearing the worst.

But, first…there was this scratching sound.  …and this “faraway” barking.  Ellie was growling and barking and jumping near the trailer.  As my sleepy brain struggled to function, I realized that Jed must be in the market trailer.  As I opened the door, he hopped out and looked both relieved and a little sheepish.  I don’t know how I missed his one hundred pounds of fur when I locked the trailer door! Well, at least the dogs were fine.

There were shingles scattered all over the backyard…the driveway…and behind the shop…and on top of one greenhouse.  My biggest fear was that they came off the house.  Our house has a fairly steep roof as it is a story and a half cape cod with dormers.  I checked the back of the house…NO problems.  THANK YOU LORD.  I couldn’t check the entire front without waking the Boss (and I really didn’t want to have to admit to being out in the dark at 2am!) I continued my survey. Oh, here’s the problem.  One side of the shop (garage) had taken a real hit and a big area had peeled away.  Hmm.  Not as bad as it could be.  Well…since I’m out here…

I was really worried about Waylon and the lambs.  They are at the back side of the farm where we have fairly large white pine trees that are planted in two long rows.  White pines do NOT hold up well to wind or other weather issues. Waylon is essentially half the flock and the lambs are one of our cash crops.  I started walking out back…

My walk continued. From what I could see by the light of the flashlight, the gardens were okay.  I was somewhat amazed that the wind hadn’t torn up everything.

Hoophouse #1 was miraculously untouched.  Did I just see glowing eyes heading my direction?  What could that be?  “MEOW!!!!”  Booooyyy was also completely unharmed by the storm and accompanied me to check on the sheep out back.  A quick check revealed that they had all indeed survived without incident. I couldn’t see any significant tree damage. The top to the broiler pen was somewhat damaged, but the chicks were still inside and looked fine.

Since I was already out in the dark in the middle of the night, I decided to make a full check and see if all the ewes out front were alright, too.  When I walked into the field we refer to as “pinetree paddock”, I was surrounded by frightened sheep.  They were milling about and muttering to themselves.  As I did a quick headcount, I noticed lights down on the road.  The sound of large equipment moving through the darkness was startling.  I thought I heard chainsaws, and I could have sworn that there was a snowplow down there.  WHAT was going on?  The machinery moved on down the road.  Since the sheep seemed fine, I finally returned to the house. Prior to entering the house, both the other cats put in an appearance, demanding petting and cat cookies.

As I eased into bed, the Boss’ voice came out of the darkness, “So? Ya gonna give me the report? What kind of damage was there? The roof?  Did the plastic blow off the hoophouses?”  Apparently he hadn’t been able to sleep either and since my nocturnal ventures are nothing out of the ordinary, so I gave him the few details of which I was certain.

“Humph!” I’m fairly certain that was his first response.

By this time, it was nearly three.  It was obvious that power would be out for a good while.  We would need to fire up the generator.

Not so fast…the generator takes gasoline.  …and, well, the gasoline had all been used in tractors and tillers. Are you serious?  We have NO gas?  What happened to that “boy scout spirit” we try to embody?  You know, always be prepared…?  …sigh… It was either go get gas in town or siphon it from one of the vehicles.  Surely, there would be gas in town.

The trip to town was weird and unsettling.  It is incredibly dark out here without the glow provided by our electrified existence.  There were tree branches everywhere. The road was passable, but in some cases, just barely.  The occasional deer wandered across the road in front of us.  It seemed like a scene from some disaster movie.

When we got to town, there were no lights.  No street lights, no store signs…nothing!  That seemed a little more than apocalyptic. (I think I have watched WAY too many horror/sci-fi movies) After driving around for a while, we finally found a station with gas.  I think we cheered.

After the Boss pumped the gas, we raced back home, dodging tree branches and wandering deer to fire up the generator in order to return some sense of normalcy to the farm before heading out to the Market at 5am. While the bank of freezers full of meat and farm products were our first priority, having some coffee made a significant difference in our ability to deal with the situation. The generator would keep the freezers frozen until we got back, at which point we would make our assessment as to repair and clean-up priorities.
But, we would deal with all of that when we returned from the Market.  We focused on heading off to Market because surely by the time we headed home things would be “normal”.

Little did we know that the adventure was just beginning… 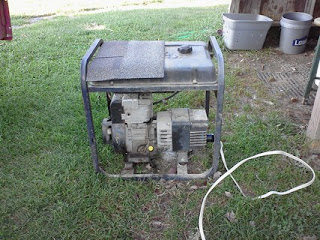 …and that THIS would be our lifeline for the next five days!
Posted by Barbara at 12:45 PM