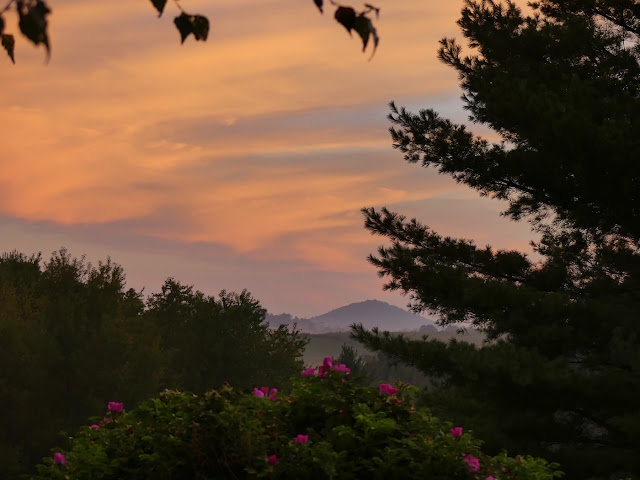 Labor Day means the end of the “official” summer season. Kids go back to school, fall decorations show up in retail and it’s time to put away those white shoes.

None of those things have much of an effect on our little operation here on the hill. The kids are all grown up, I never do much seasonal decorating and wearing white shoes ever would just be plain silly. So, it’s pretty much business as usual. That’s just the way it is and reading this post,  it always has been.

But, there is some comfort in routine.

To that end, the week started with another broiler processing day. We hoped to get an early start and beat the heat. That didn’t happen. Not because we were late, but because the day just started out steamy. But, there were no major mishaps and we got the broilers chilling in the walk-in before lunchtime. Just one more processing day and we can shut down the broiler operation for another year.

The next pressing job of the week was changing out Angus’ marker. By changing colors every 17 days, we can tell which the ewes have been successfully bred. It should only take one “encounter” to get started on the lambchops for the next season. The mating will leave a color on the ewe’s back. In theory, she should only get marked once (well, multiple times, but only during a 24-hour period). So, she would only have one color on her back. If you end up with rainbow sheep (and we have in the past) you have a very serious problem. And, more than likely NO lambchops! (yep, that happened, too) But, so far…so good. At this point, I hesitate to get excited and mark the calendar with potential lamb births. Experience has taught me that it’s best to wait just a little while before making any announcements. Fingers crossed!

The heat can affect breeding. If it’s too hot, the ram can become sterile. Or the ewes won’t cycle. (neither seem to be an issue this year)  But, if we don’t get markers made for hot weather, we have melty, messy crayon all over everything. One year we had blue grass everywhere the ram laid down! Changing the marker in warm weather isn’t terribly pleasant, either. While Angus is quite manageable, he is huge, and rams have a peculiar scent. Holding him still isn’t hard, you just give him a big, ol’ hug. His wool is soft, and he feels kind of like a big pillow (with a solid-steel core). But, he’s hot and we’re hot and we still end up smelling ever so slightly of ram for the rest of the day.
But, the job went off without issue and he has made a complete recovery (did you read last week’s post?), so everyone was happy when the sheep headed out front to graze once more. 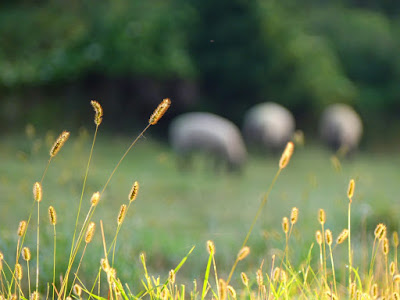 Then the ortho doc wanted to take a look at the Boss’ shoulder to see if it needed further treatment. So, we left the hill and the heat behind and headed out to UVA for a fluoroscopy. (I had no idea what that was…it’s kind of like an x-ray movie) When we arrived, we were informed that the MRI machine was down. No problem, we could wait. But…the machine was really down. Like, call the representative from the manufacturer down. And, he wouldn’t arrive for hours. We would have to re-schedule. Again, no problem. Things happen. We headed back home. But, not before they gave us a gas card for our inconvenience. Definitely not a problem!

The majority of the week was just the same old, same old. We’re kind of waiting for a break in the hot weather so we can get serious about any fall clean-up. That looks like it should be happening this week.


However, it looks like the change in the weather will be precipitated by well…some serious precipitation. Meteorologists (and weather geeks like me) are keeping an eye on the Atlantic Ocean.The succession of storms coming off Africa are causing a fair amount of concern. Particularly the tropical system that is expected to become Hurricane Florence later today. 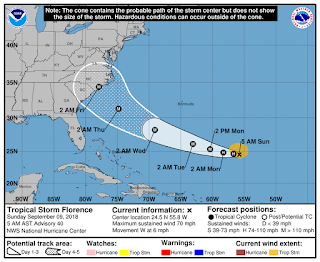 It is on a collision course with the East Coast and is now expected to make landfall at the southern border of North Carolina. This would definitely impact the weather here in the Valley and has the potential to make next weekend “interesting” to say the least. All we can do right now is watch and wait. (and make a few contingency plans) Any storm or remains thereof would definitely impact the Market.

The Market is facing a challenging season to say the least. The parking garage make-over project has been a real pain. The loss of parking spots is just one problem. Every other weekend the work crew stays in town, in hopes of getting the project completed by October. That means jackhammers, air compressors and the like, banging and pounding for the entire time of the market. It makes communication next to impossible at times and overshadows the musical entertainment. Not to mention literal headaches for the vendors set up at that end of the Market. The weather has added its own set of issues, both for the growing of the produce and then the selling of it. Several farms have had to contend with flooding…multiple times.

Yesterday there was a torrential downpour right as the Boss arrived for Market set-up. Thankfully, it cleared, and the morning remained dry. But, there have been a LOT of rainy weekends.

The final challenge for the Market in September will be the Mischief and Magic weekend coming up the end of the month. Between the complete ban on vehicular traffic downtown AND the potential influx of 10,000 people to a city of just about 24,000…I do not foresee a stellar Market day. (to say the least) and there will be negative impact on numerous businesses, not to mention the churches and some residents. But, other than voicing our opinion, there isn’t much else we can do.

I’ve been thinking about my own a lot lately. Check back tomorrow for a little piece about them.

But, I’ve also been thinking a lot about being grandparents. I had always heard how special and fun being a grandparent is. But, nobody ever told me how it changes your world. These little guys give me a whole new perspective on life. Seriously.  I have always said that I learned more from my own children than I ever taught them. It would seem that the next generation has something to teach me as well. Yeah, being Mamaw is special and amazing…just not the way I had expected.

I seriously love these guys! They find joy in just about everything...

It’s a rainy one here on the hill. (there’s almost 2 inches in the rain gauge already) I would like to say I will spend it writing…thanks to the Boss' efforts, I now have a gigantic bulletin board for my book project.

But, then the rainy weather sure seems like a good day for a nap...
...so it remains to be seen just how productive I will be.

Thanks for stopping by. Come back and “visit” again soon.

Want to take a "virtual visit" to the Market? Here are the Boss' photos of the week.