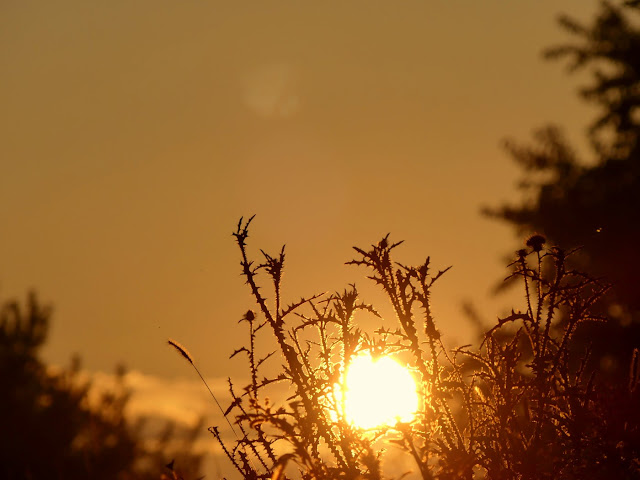 I don’t know about you, but I think August lasted FOREVER. And, I’m glad to see it go.

Although, I am a bit concerned about all those foggy mornings.  I’m pretty sure that every single morning in August had some sort of fog. So, if those old wives’ tales have any merit whatsoever, (and every fog in August means a snow) we are in for one serious winter. Guess we will just have to cross that bridge when we get to it. 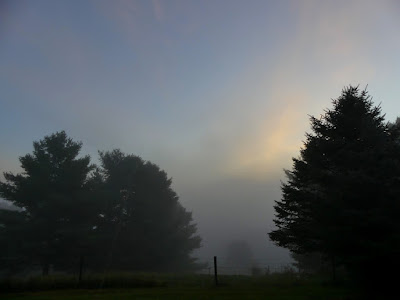 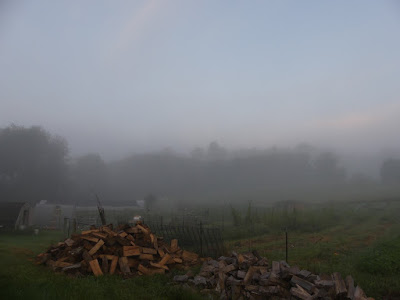 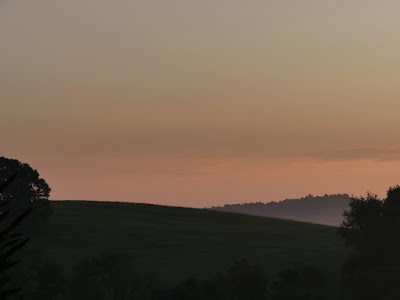 But, before August took its leave, we had another hot, hot week. I mean really hot. I looked out the kitchen window to see what appeared to be a pile of melted sheep behind the barn. I must admit, that was a bit worrisome.

Angus seemed to be walking a bit gingerly on Saturday evening. By Sunday morning, it was a full-blown limp. Since it was one of his front feet, it wasn’t quite as concerning as if it had been his back leg. But, still. A limping ram is NOT what a shepherd needs in the middle of breeding season. It calls to mind what happened a couple of years ago. Read this.

With that concern in the back of our minds, the Boss kept checking on him since I’m still somewhat incapacitated. Not only was Angus limping, but he was gritting his teeth. (it’s a horrible noise and a sure sign that an animal is in pain) He didn’t make any improvement and time was a-wastin’, so we finally brought all the sheep into the barn. After locking them in a tight space, the Boss held him still while I checked on his foot. Best I could tell he didn’t have any serious ailment. No fever, no hoof-rot, no swelling to indicate sprain. The little gland right above the hooves (can’t remember the name) might have been a little plugged. I cleaned his hoof, checked for any other injury, put a little hoof medicine on it (for good measure) and gave him a shot to help him with the pain. A short while later, his improvement was noticeable.

So noticeable that he was able to finish his breeding task by the end of the week!

Now, we just wait to see if it “took”. Fingers crossed.


One of our chores for the week involved heading over the mountain to UVA. If you thought that last year’s health saga ended with the Boss’ successful surgery, you were wrong. Did you read this one?  https://homesteadhillfarm.blogspot.com/2017/03/sunday-walkabout-3-26.html There are still what seems like LOTS of scans and bloodwork and check-ups. This is all routine. But, it’s still a little nerve-wracking. And, a trip to UVA is somewhat overwhelming for us hicks from the sticks. There are so many people. All sorts of people. Everyone is in a hurry. Everyone is preoccupied and focused on their own concerns. You can almost feel the pulse of massive human energy as you navigate through the streets and around the campus. And, everyone is on their phone…

Doctor appointment completed, bloodwork drawn, it was a relief to get back to the hill. 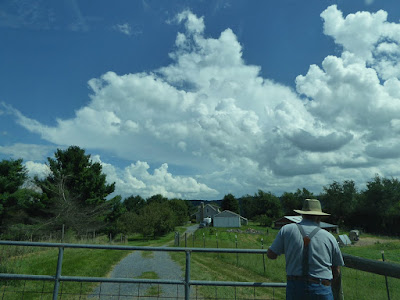 Even if it did feel like it was a million degrees and we still had to pick tomatoes. We couldn’t put the job off…it was looking like rain, again.

The foggy mornings give way to hot, steamy afternoons. This causes an instability in the atmosphere that means some sort of thunderstorm activity is a near certainty. All week Gus predicted storms. I don’t know if he can hear distant thunder or sense the change in pressure. But, he is generally pretty accurate. The closer the storm, the closer he stays with his humans. We should change his name to Velcro, he stays so close. By the time he’s trying to get in the shop, the rain has generally begun.

But, he totally blew his forecasts this week.

When the thunderstorms come in from the North, they hit North Mountain and split in half, leaving us high and dry. That was the story every single day.  When the major storm hit the north end of the county on Thursday, it dropped over 5 inches in less than an hour. However, we didn’t even get one raindrop! We did lose power for a little while. And, the sky after the storm was amazing! 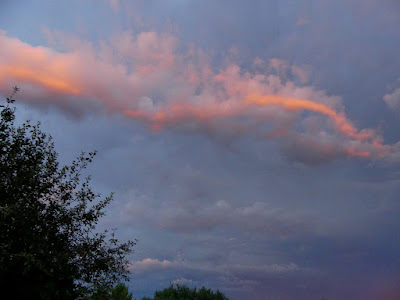 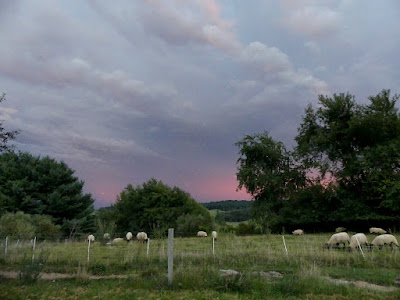 A few random shots from the week:


It was time to get ready for Market.

I keep thinking we won’t have anything to take for sale and I keep being pleasantly surprised. This week was no exception. Another great week! We owe a debt of gratitude to all those folks who come out, rain or shine to shop the Market. It’s time to start counting down to the end of the season in November.

The rain held off until after the Market ended. And, we finally saw more than a few raindrops ourselves. I wanted to get a couple of things done before going to get our little dinner guest, but, Gus wouldn’t leave me alone. Given the opportunity, he raced in the shop and wouldn’t leave. And, no wonder. It was POURING! Maybe he is a pretty good prognostic-pooch after all.

That’s it, my friends…another week on the hill is history.

Thanks for stopping by. Come back and “visit” again real soon!