Another Holiday on the Hill 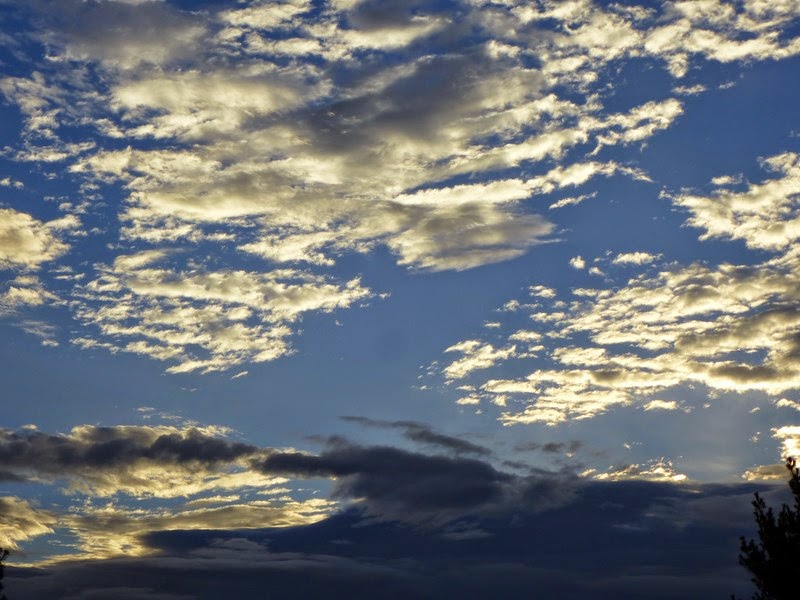 The last blast of summer with a quick trip to the beach or the pool.  One more day of sleeping late…maybe a family reunion.

Many of our customer-friends were regaling me with their plans for the long weekend when more than a few of them looked a little sheepish, or surprised…maybe it was chagrined…when they said:

They looked so concerned that I tried to be sure I smiled as I said:

Nope.  No real days off for us here on the hill.  Ever.

But, as I assured the customers…that’s really okay. We try to keep life manageable . around here (did you read this?)  And, I just realized, I have already written about a “holiday on the hill”. Did you  read this?

But, Labor Day and Memorial Day…those Monday holidays always mess me up just a little.  You see there’s no point making a trip to town when the bank is closed since I can’t deposit the market earnings and get change for the upcoming week.  So, on weeks with a Monday holiday, we simply do our Tuesday stuff first. This takes a little advance planning, particularly to make sure we have enough feed for an extra day. The only down-side to switching Monday and Tuesday work schedule, I will spend the rest of the week in a state of confusion as to which day of the week we are actually experiencing. My biggest fear is that I will somehow get really confused and miss the Market.  But, that hasn’t happened in seventeen years…I guess I can say…so far…so good! 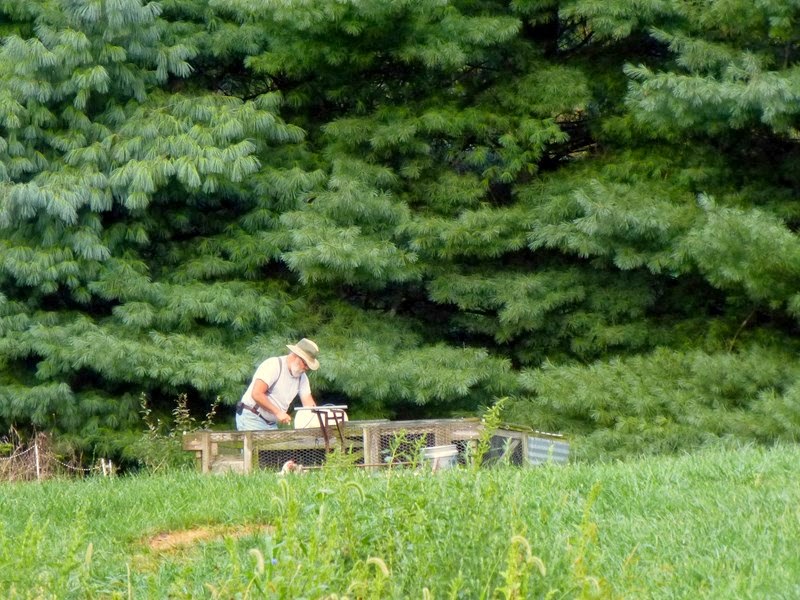 The day started in the usual fashion.  Check the weather and the news and head out for chores.  There was a broken waterer in the broiler pen which required the Boss’ attention before breakfast. 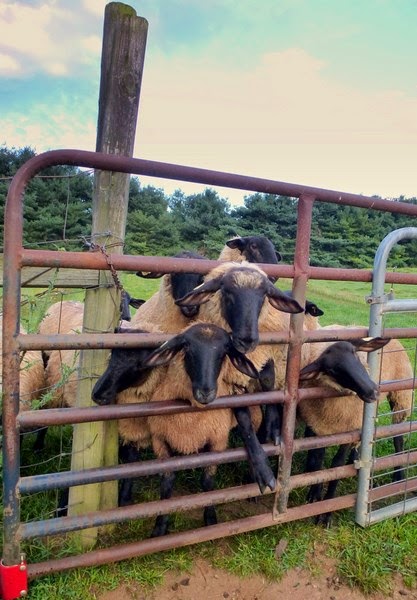 And, if anyone thinks for one moment that these guys are going to let me forget their breakfast, they need to think again!

The plan for the morning was to get the last of the spring planted potatoes harvested and in the cooler before it’s time to gather the fall harvested potatoes. (and the clock is ticking) There were only about four of the original eighteen rows left to harvest. (the Boss has been digging small amounts each week for Market sales) But, it rained HARD in the night, so we thought there would be a delay.  I guess one good thing about the dry, dry weather…despite the rain, the ground was still workable. It was actually dusty in most places. The potato job was a go!

The Boss ran the potato plow through the garden leaving an open trench. 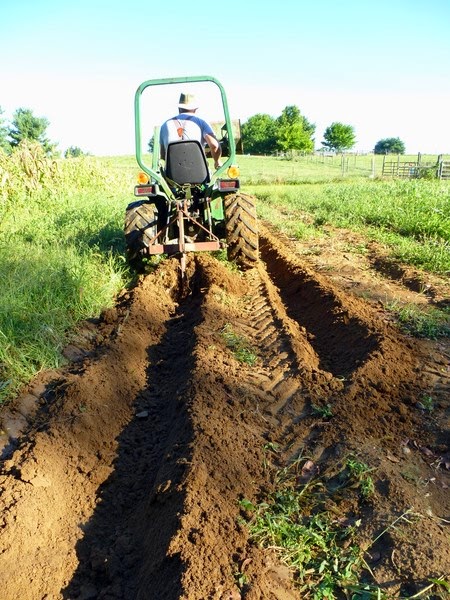 Next, he plowed a row of potatoes. 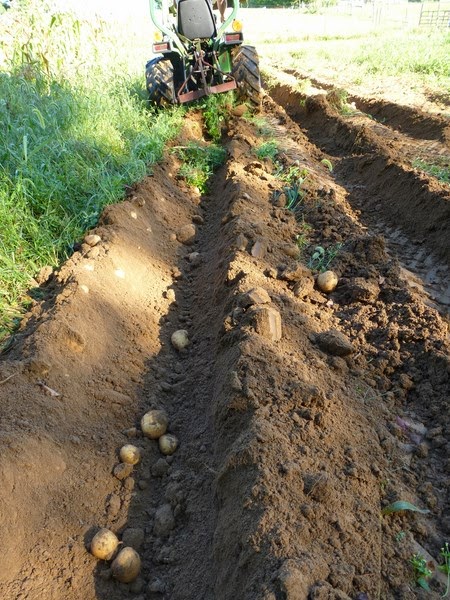 Then, we worked in tandem, picking the potatoes and placing them in the open row. They were left to dry slightly before going into the cooler. 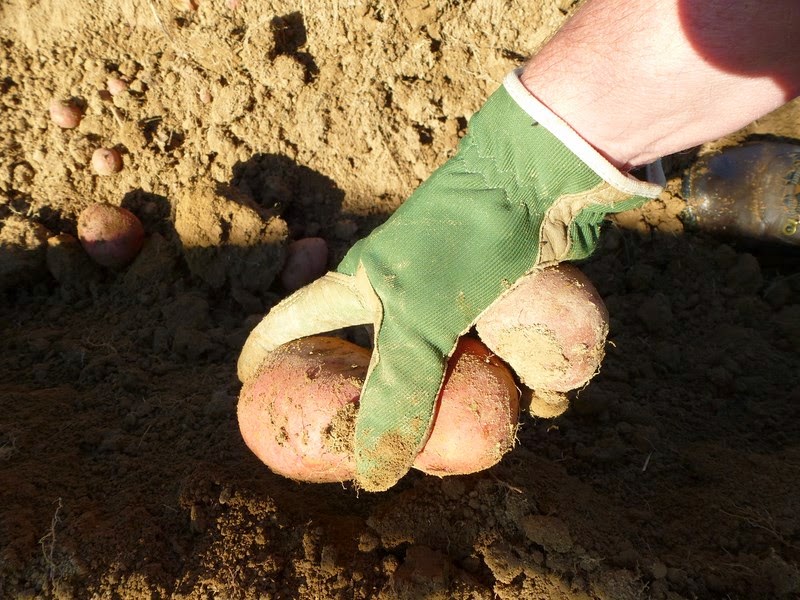 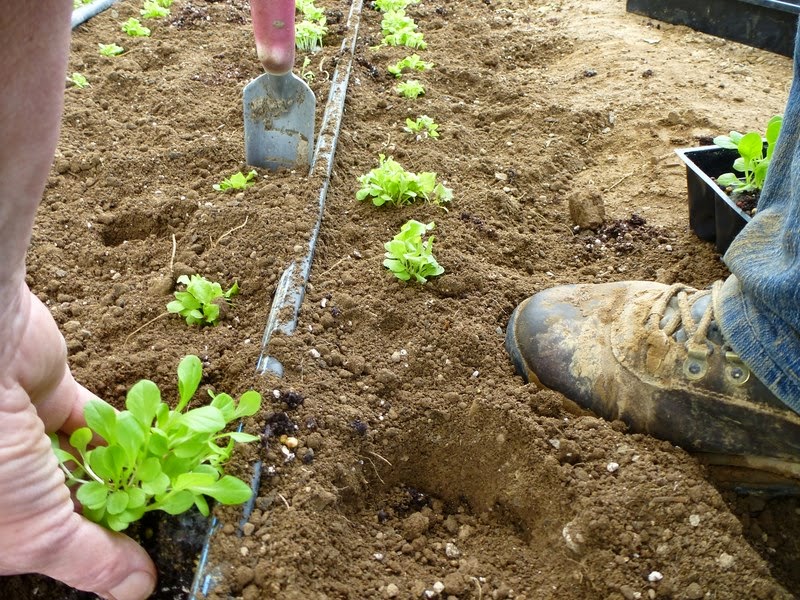 While the potatoes were “curing”, the Boss tilled the open hoophouse beds. I am trying to get all the over-wintering crops in before mid-September. So, I planted some spinach and lettuce for the late season while he bushhogged the spent garden crops and did some mowing in the gardens.

By then it was lunchtime.  Thank Goodness, I was starving.

After lunch, we headed back out to the potato garden.

We picked up all the potatoes,sorting for size and hauled them up to the reefer.  Since small potatoes do not store as well as larger ones, we pick those out and sell them separately as “tiny taters”. The others were placed in plastic hoppers to await sale at the Market.

With the potatoes sorted and stored, the Boss washed up the ones he intends to sell this week.  I know, potatoes store better withOUT being cleaned.  However, they look pretty (and sell better) when they are clean. 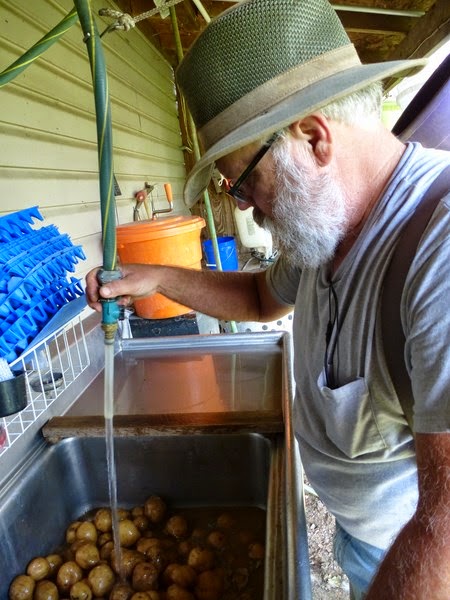 So, wash those ‘taters, Boss!

…and since clean eggs sell better, too…then he washed and sorted the eggs he has gathered so far this week.  They were put in the cooler to await boxing before this week’s Market. 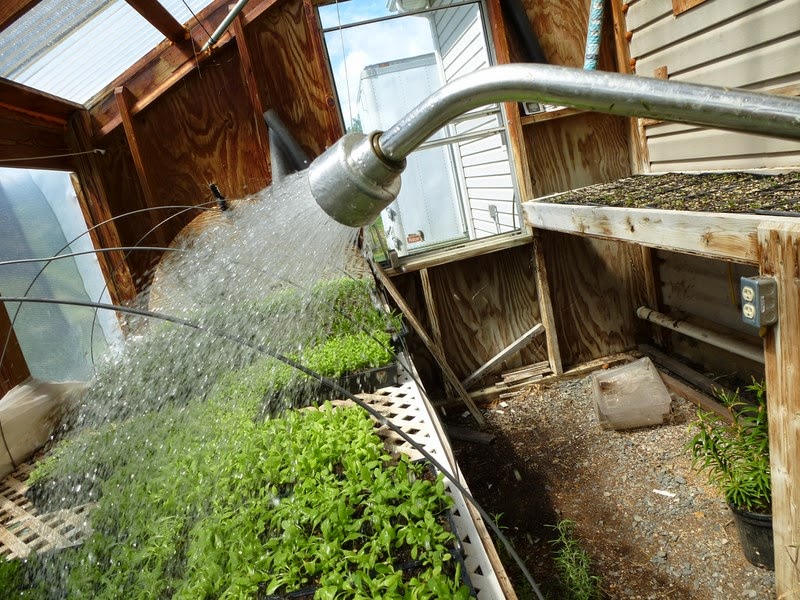 Since it was a hot, hot day the greenhouses needed some serious attention so that we wouldn’t end up with pre-cooked greens.  I watered all my little transplants before heading out to check on the squash and zucchini in the garden. It is only by checking every other day that we do not end up with enormous, canoe-sized zucchinis (and even then some of them escape my watchful eye).  This time of year the growth process slow considerably, so there were only a few to harvest.  These were cleaned and put in the cooler. 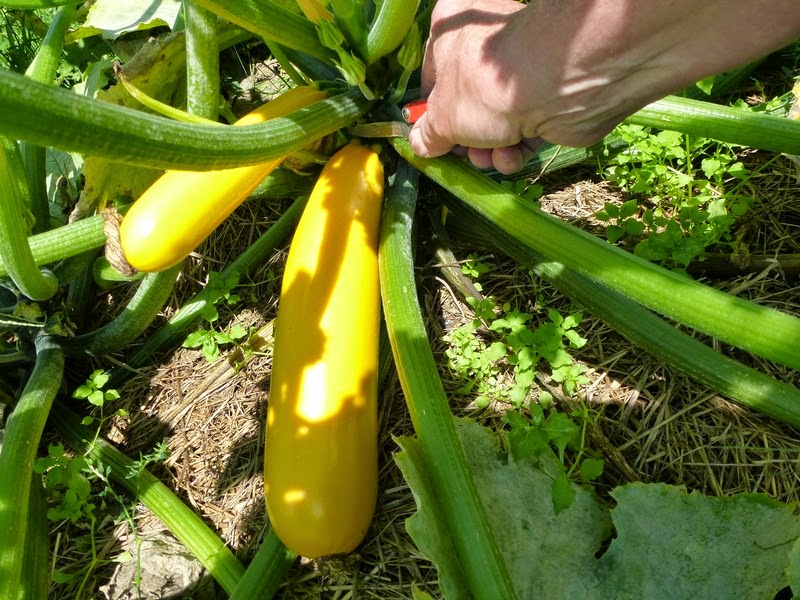 Then there was some prep work for next week’s broiler processing, checking the Market freezer and a little office work.  …and suddenly, it was time for afternoon chores.

By the time chores were completed and those sad tomatoes left from the Market were scalded so I could peel and freeze them for winter, it was time to make supper.

After supper, it was a quick check on the gates…and a little tomato chopping. Those sad tomatoes made 5 packages for using in chili or stew for winter time! They weren’t nice enough to offer for sale, but we’ve got to eat, too.

…and that was that.

The end of another “holiday” on the hill.

which will feel like Monday...
oh, I do hope I don't get too confused!